Protecting the City of Florence

One of the recurring motifs in Florence is the marzocco lion. A culturally significant totem believed to keep the city safe and sound.

In Florence, iconic sights line up like pearls on a string. Within a short distance you’ll stumble upon the famous cathedral; the baptistery with the golden gates of paradise; Giotto’s Campanile; Palazzo Vecchio with Michelangelo’s David and multiple other, similarly famous sculptures; the Uffizi Gallery with wonderful paintings of Titian, Raphael, Caravaggio, Botticelli and Michelangelo; Ponte Vecchio; Palazzo Pitti and the Boboli Gardens. It’s tempting to just go with the flow, checking off must-sees on the mental bucket list.

But before I get lost in the throng of tourists, I challenge myself to notice some of the more quirky details that add to the depth and greatness of the overall experience. In a town, with an annual influx of 25 million tourists and a permanent population of just 350.000 people, it does not make sense to talk about hidden corners. Every aspect of the city has been explored, mapped and described several times over, but it is still possible to discover features that have not yet been described by Lonely Planet. Features that often hide in plain sight, like the fleur de lis, the turtles in Piazza Santa Maria Novella and the marzocco lion.

I first noticed the lion of Florence during an uneventful walk along the river Arno. Broad pavements offered some respite from the heavy, motorized traffic that cluttered the bank streets, but selfie moments were few and far between, and after the cultural overdose of the inner city the overwhelming ordinariness of this part of Florence made me restless. In order to relax, I focused on the cast iron lampposts and registered that each lamppost stood on three ornate, cabriole claw feet. The leg muscles and shape of the paw indicated a big cat, and from that moment I was ready to go lion hunting. 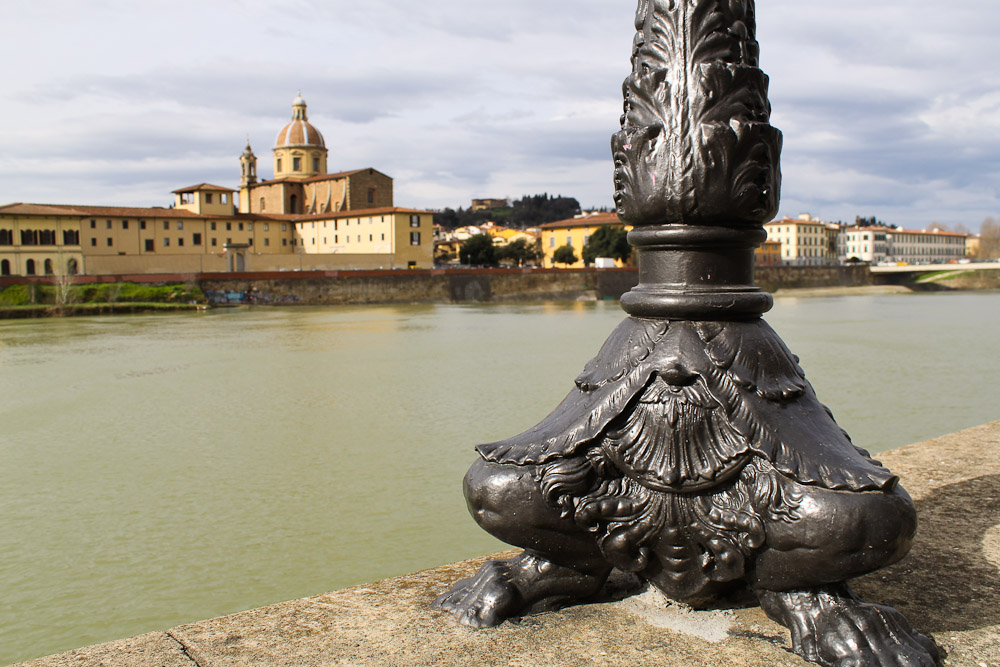 The claw foot lamppost that reminded me of the importance attached to the marzocco lion in Florence.

The Significance of the Marzocco Lion

In the Republic of Florence the lion was the most important symbol of political power and independence. An animal that could annihilate both the wolf of Siena and the eagle of Pisa. For this reason a lion guarding a lily was the first public, secular sculpture commissioned by the Republic in 1377, and it was placed right outside Palazzo Vecchio. Here it became known as the marzocco, a derivation of the Latin ‘Martocus’ meaning little Mars in recognition of the Roman god of war who, according to Dante’s Divine Comedy, had protected Florence for centuries.

Unlike the winged lion of Venice, the Marzocco is not a mythological creature but a fairly accurate and well-proportioned representation of the king of beasts. Up until 1771, the Republic of Florence even kept a menagerie of live lions in Via dei Leoni behind Palazzo Vecchio. One of these lions allegedly broke out of the cage and took off with a baby boy, but the baby was later returned to the mother unscathed. The story illustrates how the lion protects the citizens of Florence, and for this reason lion sculptures and imagery can be found all over the city on pedestals, gates and doorways. 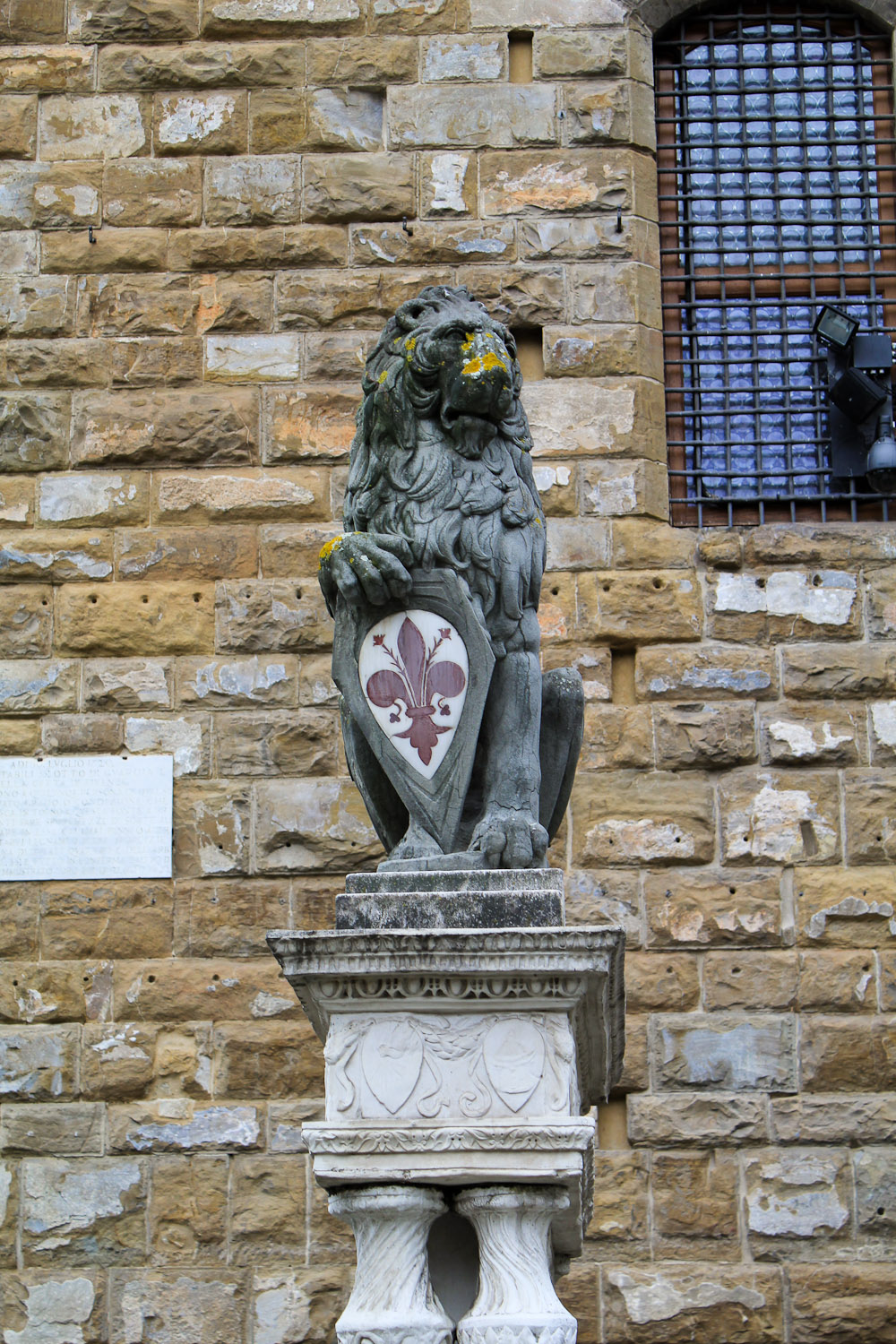 A copy of Donatello’s Marzocco lion protects the emblem of Florence outside Palazzo Vecchio.

Apart from Donatello’s Marzocco outside Palazzo Vecchio, there are lions on the pediment surmounting the portico to the palace, lions guard the ticket office in Sala della Dogana, and on the opposite corner two lions paw spheres in Loggia della Signoria. And once you have started to look for lions, you’ll realise that they are everywhere in Florence – including on lampposts along the Lungarno. 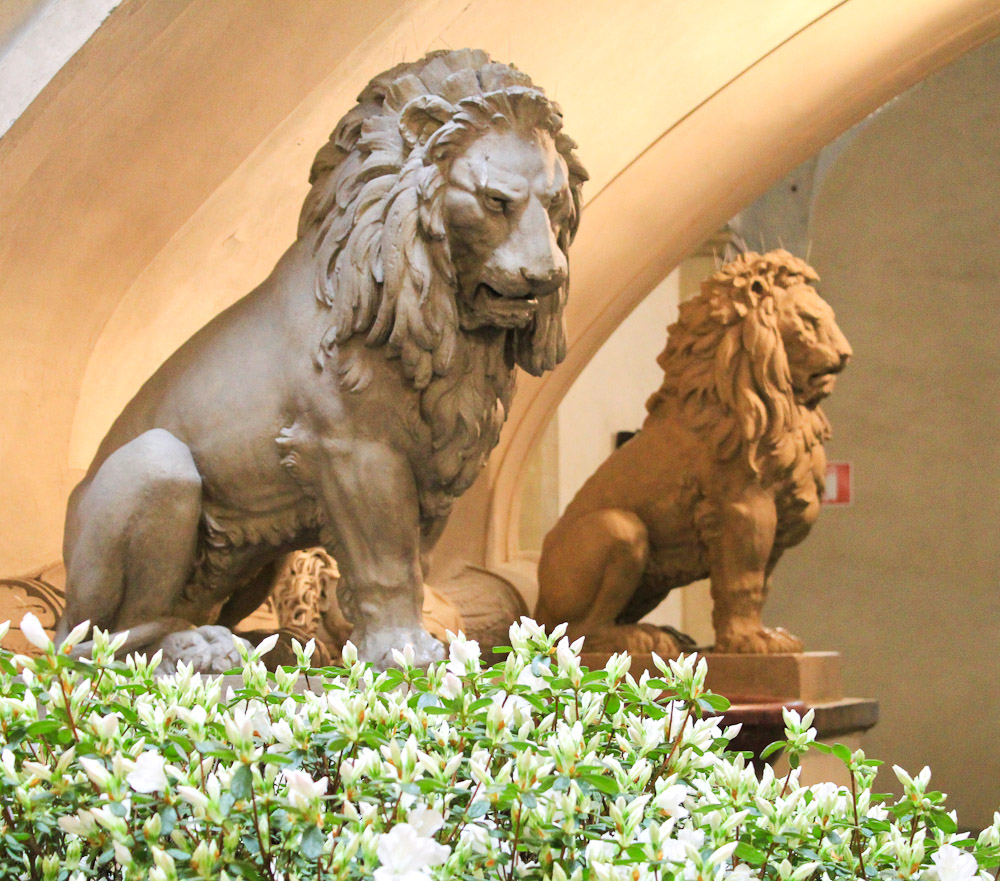