Charmed by a Courtyard
in Palazzo Vecchio

In contrast to the bleak exterior, there’s a surprising playfulness to be found behind the entrance through the charming courtyard in Palazzo Vecchio in Florence.

I guess most visitors in Florence have walked up the stairs to Palazzo Vecchio, past Michellangelo’s statue of David and Bandinelli’s Hercules and Cacus, and been surprised by the beauty of the first courtyard.

While the solid brick structure on Piazza della Signoria express medieval dominance and power, the interior displays a sense of humour along with the grace and elegance of the late Renaissance. There are all kinds of figures and people dancing on the ceiling in the grotesque decorations of the barrel vaults, and the columns exhibit a rich decorative imagination in gilt and stucco.

The whole setting exudes an energy and entertainment value that defies description. 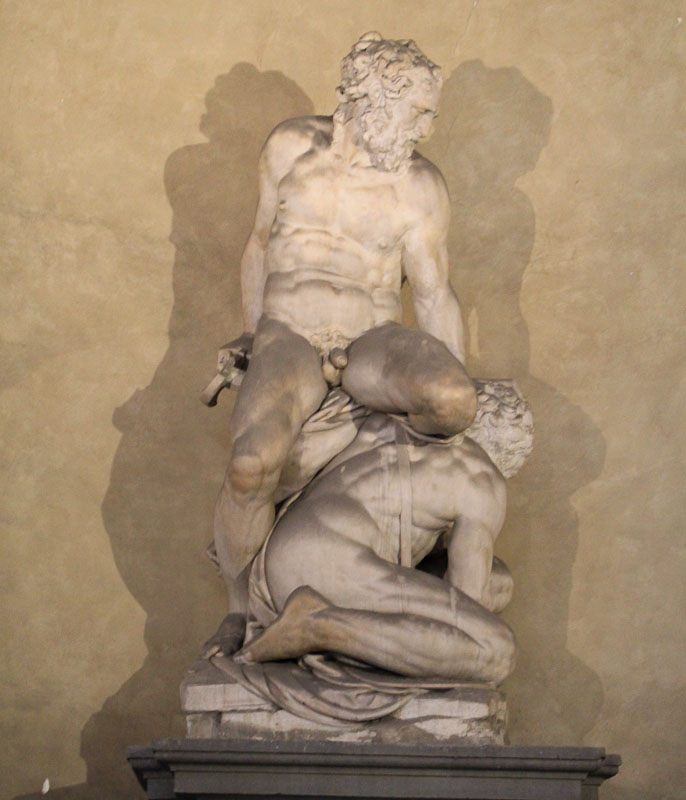 Samson repressing one of the materialistic philistines.

In addition, the courtyard in Palazzo Vecchio is inhabited by several sculptures. First there’s this statue of a muscular man with a receding forehead, pressing his knee against the neck of another man, which passing guides describe as ‘Samson and the Philistine’ by Leonardo’s younger brother Pierino da Vinci, who died at the age of only 23.

I like the exaggerated cauliflower muscles on the backside and the sinewy legs of the repressed representative for the materialistic and uncultured masses. Yet the chiseled marble isn’t half as charming as the cute bronze baby balancing on one leg on a fountain in the centre of the courtyard. 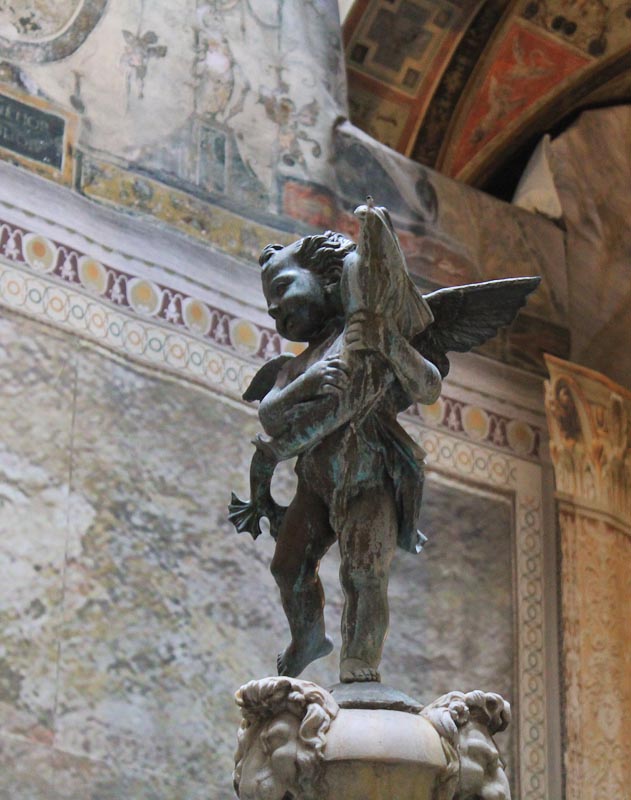 An angel child hugging a dolphin

At first I took this fountain figure to be Cupid, but instead of a bow and arrow the chubby child holds on to a fish that is so slippery and alive it sprouts water. The Putto with Dolphin was originally made by Andrea del Verrocchio for the Villa Medici in Careggi, but it was brought to Palazzo Vecchio, when the son of Cosimo I married Joanna of Austria in 1565. For the same reason Giorgio Vasari, who designed the secret corridor on Ponte Vecchio, decorated the walls with cityscapes depicting Vienna, Linz and Innsbruck and other places in the Habsburg monarchy. The Duke of Tuscany clearly didn’t want his new daughter-in-law to become homesick.

Yet Joanna the Grand Duchess of Tuscany never felt at home in Florence. In spite of the welcoming courtyard, her husband preferred the company of his mistress, and 13 years and 7 children after her marriage the heavily pregnant Joanna fell from the stairs in the new Palazzo Pitti and died. But that is an altogether different story. It has nothing to do with the charming courtyard that serves as a small appetizer to the grand tour of Palazzo Vecchio.