– A literary guide to the city of art

For more than 600 years poets and writers have flocked to the City of Art. Their experiences are reflected in this collection of Florence quotes.


For a long time, I’ve been wanting to add a collection of Florence quotes to my posts on Rome quotes, Venice quotes and quotes on the cathedral of Milan.

As the birthplace of Dante Alighieri (1265-1321), Francesco Petrarca (1304-74) and Boccaccio (1313-75), Florence has been a source of inspiration for foreign poets and writers since Chaucer visited the city in 1373. It was an obligatory stop on the Grand Tour undertaken by young men of means from about 1660 and 200 years onwards. And in my opinion the observations recorded still reflect the magic and beauty as a literary guide to the City of Art. The Florence quotes are presented chronologically.

The view from Fiesole

…The broad circumference
Hung on his shoulders like the moon, whose orb
Through optic glass the Tuscan artist views
At evening from the top of Fesolé,
Or in Valarno, to descry new lands,
Rivers, or mountains, in her spotty globe.
Milton, Paradise Lost 1644

A town that has survived itself

“Many of the narrower streets are like lofty paved courts, cut through a solid quarry of stone. In general, the public buildings are old, and striking chiefly from their massiveness and the quaintness of the style and ornaments. Florence is like a town that has survived itself. It is distinguished by the remains of early and rude grandeur; it is left where it was three hundred years ago. Its history does not seem to be brought down to the present period. On entering it, you may imagine yourself enclosed in a besieged town; if you turn down any of its inferior streets, you feel as if you might meet the plague still lurking there.”
William Hazlitt, Notes of a journey through France and Italy 1826

Under the shadow of a stately Pile,
The dome of Florence, pensive and alone,
Nor giving heed to aught that passed the while,
I stood, and gazed upon a marble stone,
The laurelled Dante’s favourite seat. A throne,
William Wordsworth, Memorials of a Tour in Italy 1837 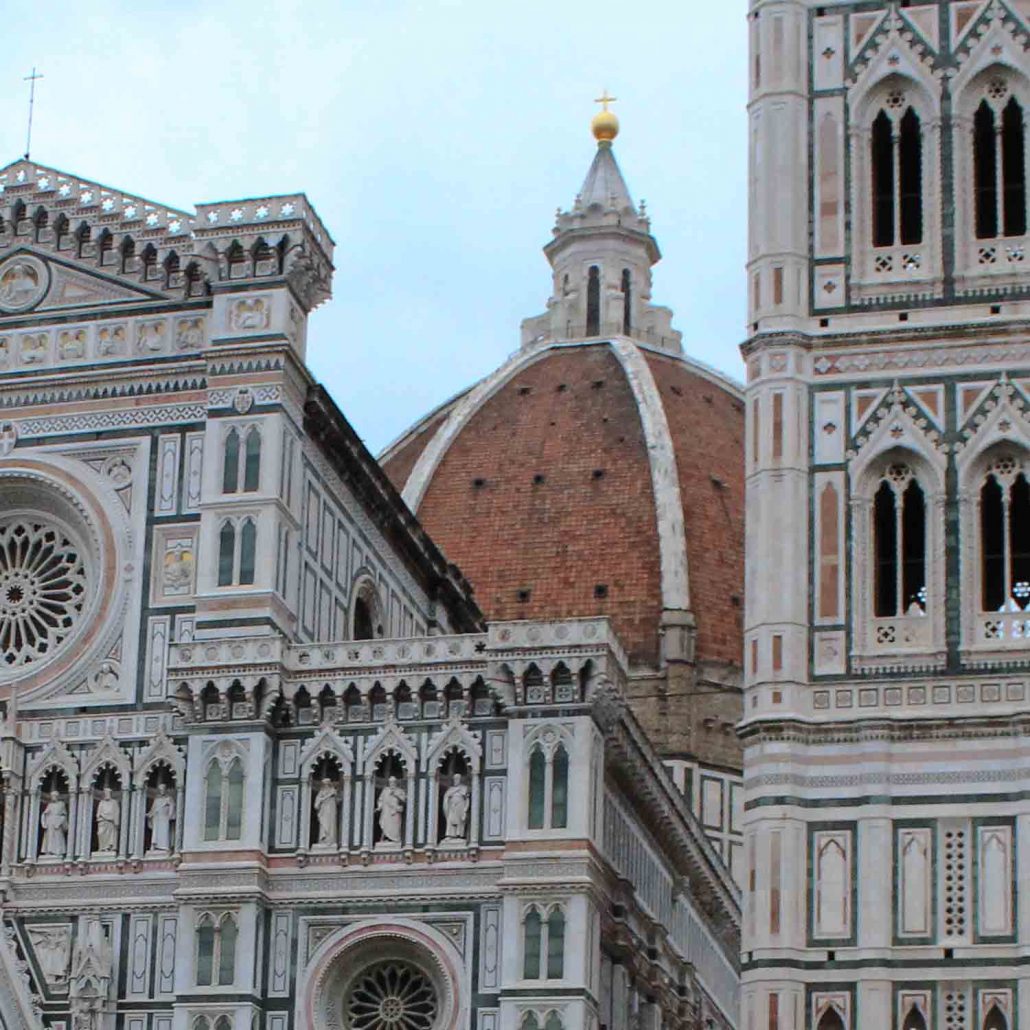 Many writers have tried to capture the fascination of Florence cathedral in words.

A pig, made of brass and curiously formed

“In the city of Florence, not far from the Piazza del Granduca, runs a little street called Porta Rosa. In this street, just in front of the market-place where vegetables are sold, stands a pig, made of brass and curiously formed. The bright color has been changed by age to dark green; but clear, fresh water pours from the snout, which shines as if it had been polished, and so indeed it has, for hundreds of poor people and children seize it in their hands as they place their mouths close to the mouth of the animal, to drink.”
Hans Christian Andersen, The Metal Pig 1842

A most enchanting feature

“Among the four old bridges that span the river, the Ponte Vecchio, that bridge which is covered with the shops of Jewellers and Goldsmiths, is a most enchanting feature in the scene. The space of one house, in the centre, being left open, the view beyond, is shown as in a frame; and that precious glimpse of sky, and water, and rich buildings, shining so quietly among the huddled roofs and gables on the bridge, is exquisite“.
Charles Dickens, Pictures from Italy 1846

“Everything about Florence seems to be coloured with a mild violet, like diluted wine.”
Henry James, Letter 1869

You will begin to wonder

You will begin to wonder that human daring ever achieved anything so magnificent.
John Ruskin, Mornings in Florence 1875

“It is three in the afternoon, and the faces of the buildings are steeped in afternoon stagnation. The figure of Neptune is looking an intense white against the brown-grey houses behind, and the bronze forms round the basin are starred with rays on their noses, elbows, knees, bosoms and shoulders. The shade from the Loggia del Lanzi falls half across the Piazza.”
Thomas Hardy, Italian Journey 1887

“This is the fairest picture on our planet, the most enchanting to look upon, the most satisfying to the eye and the spirit. To see the sun sink down, drowned on his pink and purple and golden floods, and overwhelm Florence with tides of color that make all the sharp lines dim and faint and turn the solid city to a city of dreams, is a sight to stir the coldest nature, and make a sympathetic one drunk with ecstasy.”
Mark Twain Mark Twain’s Autobiography  1892 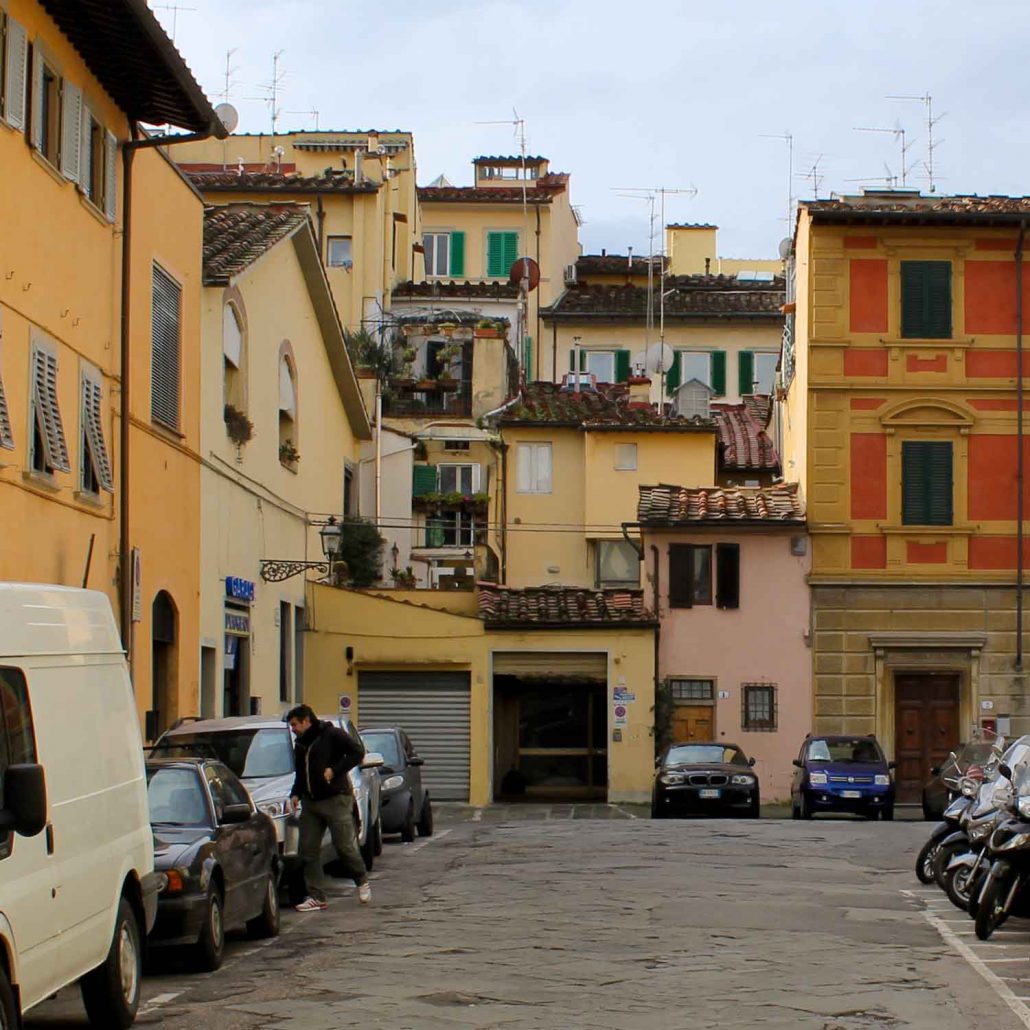 A quiet and colourful corner of Florence.

“The Palazzo Vecchio rises before me, oppressive in its abrupt compact bulk, and I can feel upon me its heavy grey shadow. From the building’s crenellated shoulders soars the bell tower; stretching out its muscular neck into the nightfall. It is so high that I am seized by dizziness as I lift my eyes towards its helmeted head.”
Rainer Maria Rilke Florentine Diary 1898

A pillar of roughened gold

“She fixed her eyes wistfully on the tower of the palace, which rose out of the lower darkness like a pillar of roughened gold. It seemed no longer a tower, no longer supported by earth, but some unobtainable treasure throbbing in the tranquil sky.”
EM Forster, A Room with a View 1908

“Perhaps the best image… of the positive presence of what I have called temperate joy, in the Florentine impression and genius, is the bell-tower of Giotto, which rises beside the cathedral. No beholder of it will have forgotten how straight and slender it stands there, how strangely rich in the common street, plated with coloured marble patterns, and yet so far from simple or severe in design that we easily wonder how its author, the painter of exclusively and portentously grave little pictures, should have fashioned a building which in the way of elaborate elegance, of the true play of taste, leaves a jealous modern criticism nothing to miss.”
Henry James, Italian Hours 1909

“And when I thought of Florence, it was like a miracle city embalmed and like a corolla, because it was called the city of lilies and its cathedral, St. Mary of the Flowers.”
Marcel Proust, Swann’s Way 1913

“In another minute he was passing between massive buildings out into the Piazza della Signoria. There he stood still and looked round him in real surprise and real joy. The flat, empty square with its stone paving was all wet. The great buildings rose dark. The dark sheer front of the Palazzo Vecchio went up like a cliff to the battlements, and the slim tower soared dark and hawk-like, crested, high above.”
DH Lawrence, Aron’s Rod 1954

“More than any other piazza in Italy, the Piazza della Signoria evokes the antique world, not only in the colossal deified statues, the David, the Neptune…, the hideous Hercules and Cacus, but in the sober Loggia dei Lanzi, with its three lovely full arches and its series statuary groups in bronze and marble. Some are antique Greek and Roman; some are Renaissance; some belong to the Mannerist epoch; one to the nineteenth century. Yet there is no disharmony among them.”
Mary McCarthy, The Stones of Florence 1959

Oh Florence, Florence, patroness of the lovely tyrannicides!
Where the tower of the Old palace pierces the sky
Like a hypodermic needle.
Robert Lowell, Florence 1964

“In Florence death seems at once less fearsome and more glamorous than in other places, perhaps thanks to the superabundance of mortified Christs, many of the medieval and grimacing, with raw-looking wounds.”
David Leavitt, Florence, A Delicate Case 2002

A world as perfect as any heaven

“Long ago in the octagonal gloom of the Battistero di San Giovanni he had been baptized twice, as was customary, once as a Christian and again as a Florentine, and to an irreligious bastard like Ago it was the second baptism that counted. The city was his religion, a world as perfect as any heaven. The great Buonarroti had called the Baptistery doors the gates of Paradise and when the little baby Ago emerged from that place with a wet head he had understood at once that he had entered a walled and gated Eden. The city of Florence had fifteen gates and on their inner faces were pictures of the Virgin and various saints. Voyagers touched the gates for good luck, and nobody starting on a journey through those gates did so without consulting astrologers.”
Salman Rushdie, The Enchantress of Florence 2008

A demon at work

“Even a magnificent city such as Florence becomes more intriguing if there is a demon at work in the alleys.”
Chris Bohjalian, The Light in the Ruins 2013

“Florence and Milan had given him ideas more flexible than those of people who’d stayed at home.”
Hilary Mantel, Wolf Hall 2013