Looking back at the Paradise Gates in Florence

The newly restored Paradise Gates are among the many free sights in Florence, and if you look closely they stare right back at you.

One of the great things about Florence in Tuscany is that you can walk around the centre and accidentally bump into great works of art. Like Lorenzo Ghiberti’s golden door in the octagonal Florence Baptistery opposite the cathedral.

I had read how floods, vandalism and pollution had rendered the gilded bronze from 1452 grey and grimy. And heard about new methods of restoration and how the original panels had been replaced by copies. Yet I had all but forgotten about the doors, until I saw a large group of tourist with their backs to the cathedral and cameras pointed at a spiky fence.

Pictures and details from the gates of paradise with the restored golden door to the left compared to the grimy bronze to the right.

On closer inspection I saw the celebrated golden East door depicting 10 scenes from the Old Testament, and though I couldn’t quite recognize the stories, it was impossible not to admire the details in low relief that had been 21 years in the making. It was these doors Michelangelo called the Gates of Paradise, and the name has stuck ever since.

What fascinated me the most, however, was the framework surrounding the panels. Ghiberti has not just decorated the frames with foliage, fruit and the occasional prophet. He has also inserted 24 busts including a self portrait that stick their necks out and stare right back at us. So even though we were centuries apart I tried to engage in a staring contest with the famous artist. And unsurprisingly I blinked first.

Other things to see near the Paradise Gates in Florence

Tours around Florence for Wine Lovers 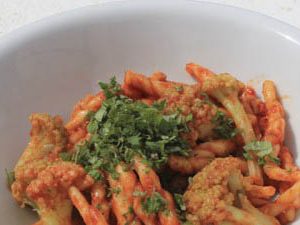 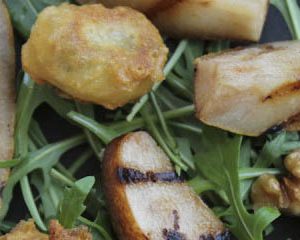 Salad with pears
Scroll to top