5 foods in Sicily you must try

Foods in Sicily are a passion reflecting the land, the sea, and the sun as well as all the invaders that have occupied the island over the past two millennia.

One of my favourite books is Tomasi di Lampedusa ‘the Leopard’ about the social and political unrest leading up to the unification of Italy. The novel also describes a sumptuous Sicilian meal of the 19th century:

“Beneath the candelabra, beneath the five tiers bearing toward the ceiling pyramids of homemade cakes that were never touched, spread the monotonous opulence of buffets at big balls: coralline lobsters boiled alive, waxy chaud-froids of veal, steely-tinted fish immersed in sauce, turkeys gilded by the ovens’ heat, rosy foie gras under gelatin armor, boned woodcock reclining on amber toast decorated with their own chopped insides, and a dozen other cruel, coloured delights.”

I am not sure you can still find gluttony like this – or that anyone would want to – but here are a few Sicilian specialties that should not be missed. 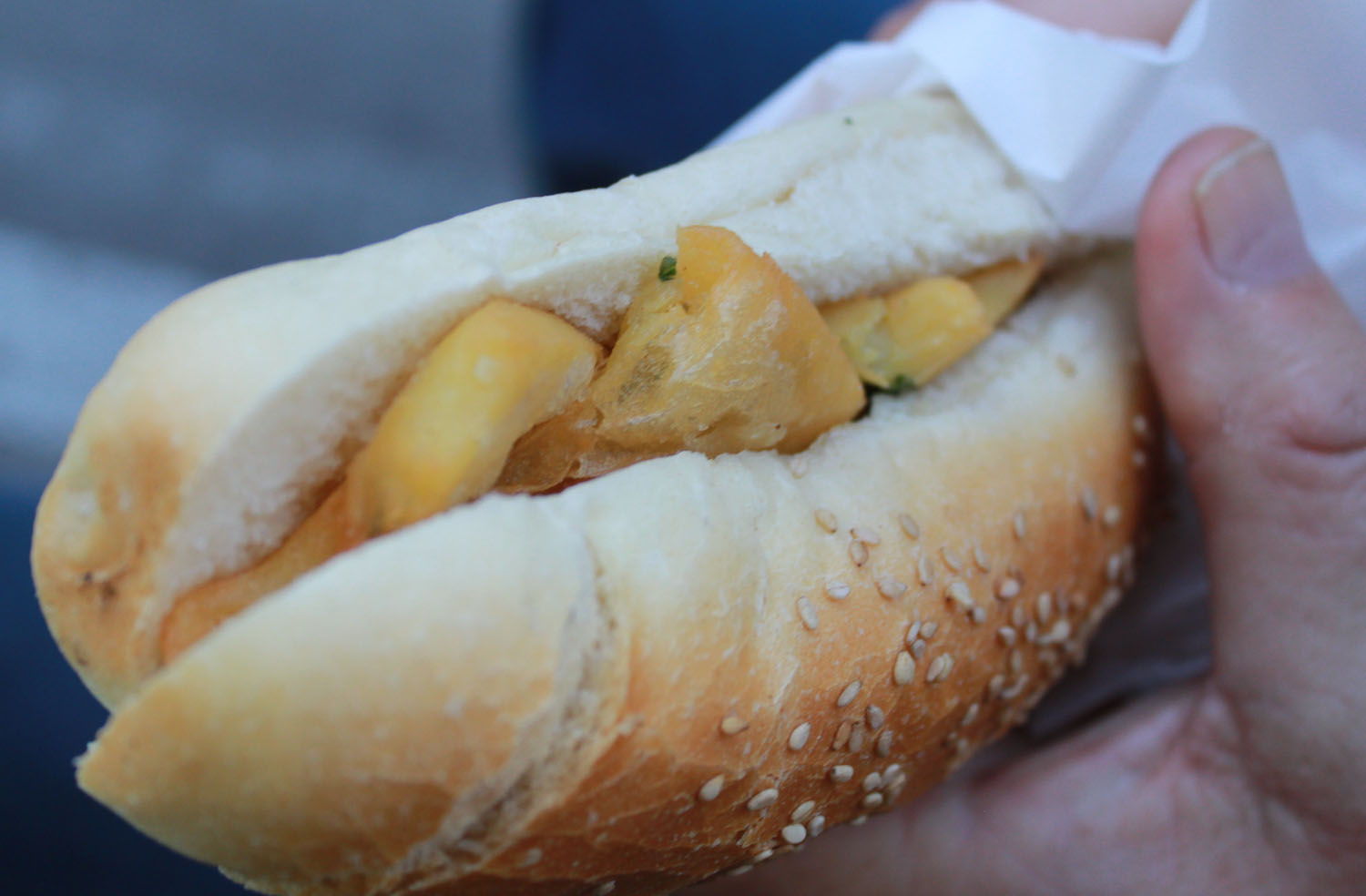 A lovely bun with the hot, fried panella

For some reason, Sicily has a rich and inventive street food tradition, and I am personally willing to walk far down narrow streets to find the best golden fried rice balls known as arancini di riso or the deep fried chickpea fritters panella. There are some very popular chips shops in eg. Palermo, and in the autumn you should give the roasted chestnuts a try.

I don’t think I have ever been to a Sicilian restaurant that did not serve Pasta alla Norma and in general Sicilians are very good at making the most of aubergine/eggplant. Just try their ciambotta, parmigiana or carponata. Dishes that could make me convert to vegetarianism. 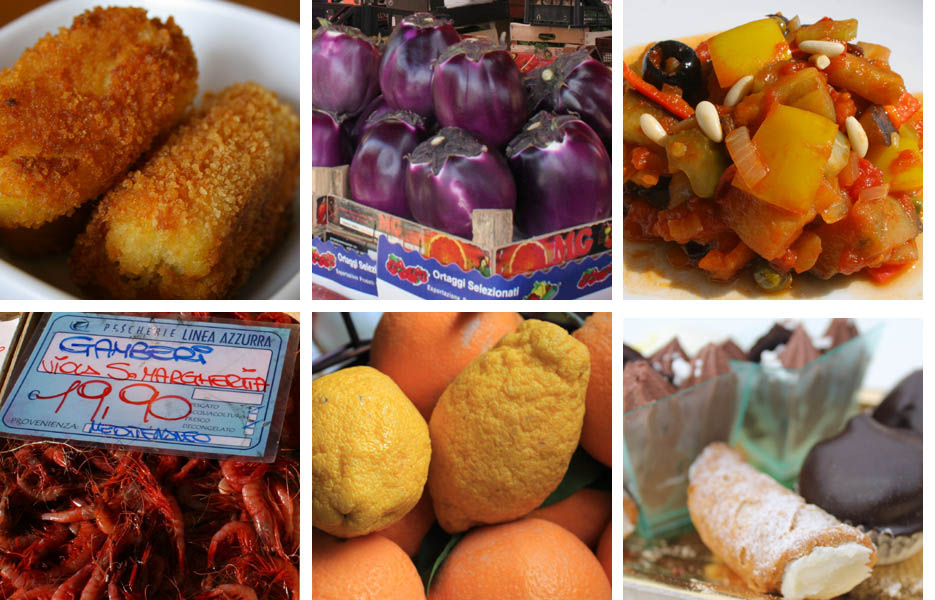 A selection of Sicilian dishes and ingredients.

Being an island with access to three seas Sicily has proud traditions for catching and preparing fish and seafood. Adventurous eaters might want to try the spaghetti with sea urchins (ricci) or boiled octopus (polpo bollito), but you could also settle for a fresh and juicy tuna or sword fish steak.

The pyramids of homemade cakes mentioned by Tomaso di Lampedusa must include cannoli and cassata along with the traditional marzipan sweets known as ‘frutta martorana’  coloured and shaped to look exactly like real fruit or pastoral animals. 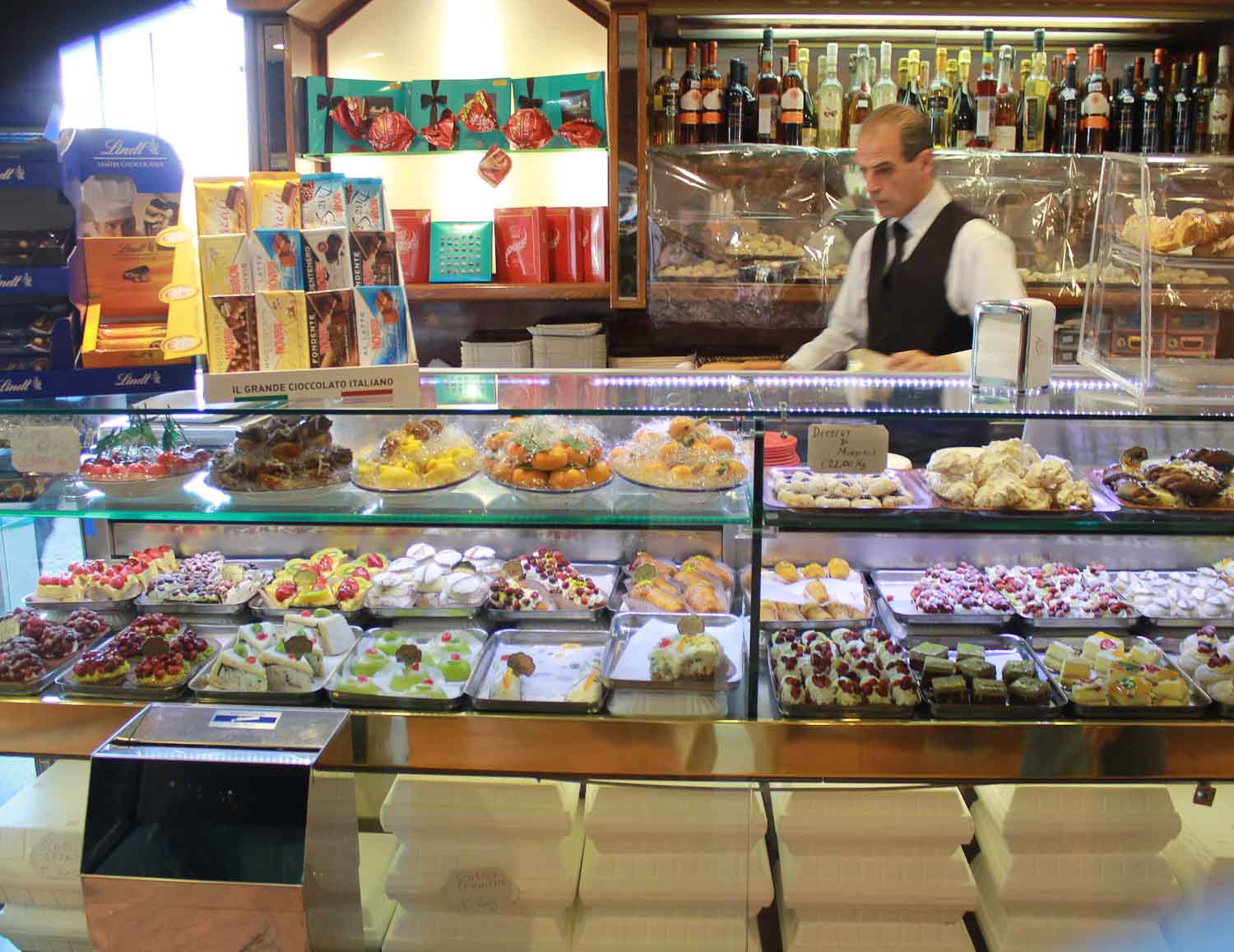 There are cakes and marzipan galore in every corner of Sicily.

The inventors of ice cream

The Sicilian tradition for making ice cream can be traced back to the 9th century, long before the invention of artificial cooling. It is said that meandering Arabs introduced a technique for making sorbet or sherbet by mixing fruit juice or honey with ice from the mountains, but it took them several centuries to work out methods for the transportation of sorbet from Mount Etna to cafes and ice cream parlours. However, the crushed ice sorbet granite (made with fruit juice) or gremolate (made with fruit pulp) is still a refreshing Sicilian specialty whether it is mixed with coffee, lemon, oranges or green mint syrup.

A Palermo market taste of the Orient