On the edge of an active volcano

Impressions from hikes on Mount Etna in Sicily, where 800 odd craters offer a perfect view of an active volcano from a safe distance.

Again this summer Etna has been sending cascades of steam, smoke, sparks, ashes and burning lava out over Eastern Sicily, covering the pavements of Catania in thick layers of dirt and dust. I suppose they are used to the eruptions, being neighbours to one of the most active volcanoes in the world. I wouldn’t mind seeing the spectacular fireworks display from the main shopping street in Catania that seems to lead directly to the summit, but I don’t need close ups of strong forces of nature.

Therefore we decided to drive up to Rifugio Sapienza and walk around the Silvestri Craters from there. Contrary to more adventurous tours with cable cars, guides and 4×4 drives, these walks are free and can be undertaken on your own without special equipment, and even though you won’t see lava bubbles and burning rivers, you still experience the drama. The endless spaghetti road up to the rifugio passes through lush fertile fields and stony macchia to arid black ground, and when you leave your car in the parking lot, you find yourself surrounded by a lunar landscape. While Italy’s other famous volcano Mount Vesuvius is a cone shaped stratovolcano, Etna consists of about 800 craters of different shapes and sizes, so there should be one for everyone.

I had expected a place crammed with tourists, but late in the afternoon there’s hardly a soul around apart from the school girl selling souvenirs, and you could balance on the edge of cone shaped craters and pretend to be Neil Armstrong or the protagonist in Jules Verne’s Journey to the Center of the Earth without interference. There’s a distinct smell of sulfur in the air, but it is not suffocating, and if you bend down and put a hand on the ground, you’ll feel the heat. Small sensory impressions with a great impact. On me, at least. 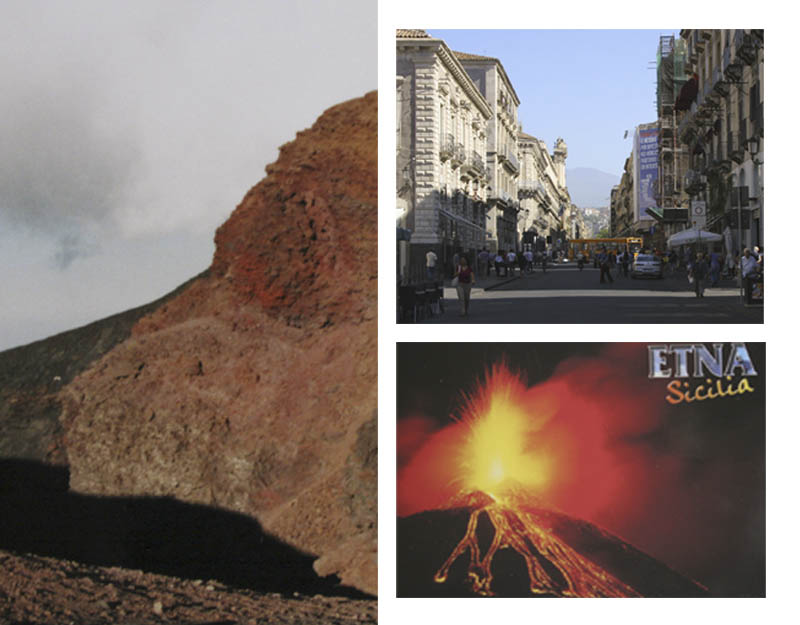 Salad with pears and pecorino

Eggplant with anchovies and capers
Scroll to top