As one of the prettiest towns in Sicily, Taormina welcomes thousands of tourists each year. They come to enjoy the glorious sun, seductive beaches and picturesque town centre and bask in the celebrity atmosphere of the mid 20th century.

And if you need a break from the maddening resort crowds and sun drunk atmosphere, there’s lots of excitement for independent travelers in and around Taormina.

Pictures of the landscape surrounding Taormina.

In addition there are centres for horse riding, scuba diving and paragliding, so you can see the beauty of the coast from all sorts of different angles.

Other natural sights include Gole Alcantara with a river surrounded by a series of lava gorges, the Cyclopean Isles by Aci Trezza and the panoramic view from Castelmola 5 km up the hill from Taormina. 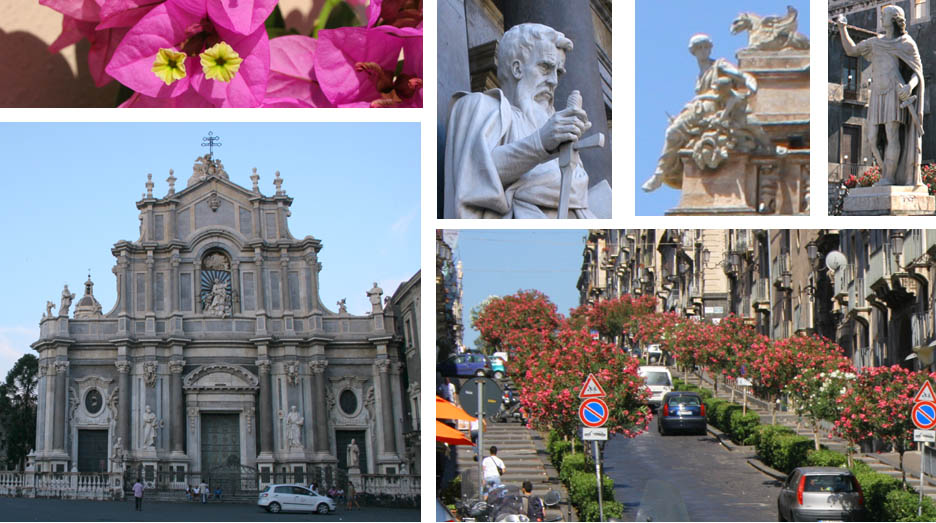 Some of the sights in Catania.

Skeletons, Godfather and other sights with a history

Taormina’s main attractions are the Greek Theatre from 300 BC, which is still in use for music and stage art; the Medieval Palazzo Corvaja that houses the tourist office and a museum of Sicilian art and tradition; the cathedral ; the odeon; and Palazzo Duchi S. Stafano with fascinating Arabic undertones. All the sights can be seen by foot or on segway tours. And there’s plenty more in nearby Messina and Catania.

Outside town in the foothills of Monte Peloritani between Savoca and Santa Teresa di Riva you’ll find a Capuchin monastery with catacombs filled with creepy looking skeletons. And in the Forza d’Agrò time has stood still to the extent that the village has become popular as a location for historic films. For instance, fans of Francis Ford Coppola’s The Godfather will recognize the backdrop of the wedding scene.

Food is one of the main attractions anywhere in Italy. Not least around Taormina.

Although Taormina is a small village of only 11 000 residents, the influx of tourists ensures a great choice of cultural events. Constant exhibitions, staged performances and concerts covering a musical repertoire from pop to classic will keep most visitors entertained. Look out for posters announcing coming events or check the programme of Teatro Greco and Villa Comunale to find out what’s going on when.

On the shoulder of the peak season the town organizes its own annual film festival, jazz festival and rally. And local holidays are marked with historic and religious ceremonies and processions.

Other cultural activities include market tours, cooking courses, tasting trips to vineyards in the countryside and Italian language classes.

More than Taormina attractions along the east coast of Sicily:

Ferry to Sicily: Whirlpools around the Strait of Messina