The mummies in Oria are lined up in a Cripta delle Mummie beneath the cathedral to ensure that posterity would remember the battles against invading pirates.

I have been traveling in Puglia for almost twenty years,  I pretend to know the attractions of the region, and I visit Oria regularly eg. in connection with the enactment of the Easter Passion,  yet the Cripta delle Mummie in Oria came as a complete surprise. We were showing off the make believe view of two seas to visitors from Denmark and entered the cathedral for a quick look around, when to young guys shouted ‘the crypt is open’ and directed us towards a side chapel with a nod of the head.

A room lined with dead

Not knowing what to expect, we paid 1 Euro each and were guided downstairs to a room lined with dead people. Pinned up in 22 niches were grotesquely grinning skeletons with gaping mouths, bony fingers, colour-drained red hair and dusty, ragged clothes. On a shelf above the mummies skulls were crammed together in an eerie display.

There’s no smell in the room, but the coolness sent shivers down our spines in spite of the summer heat outside, and I honestly didn’t quite know what to think. Why would any church preserve their dead instead of having them buried? And what story were the corpses trying to convey? 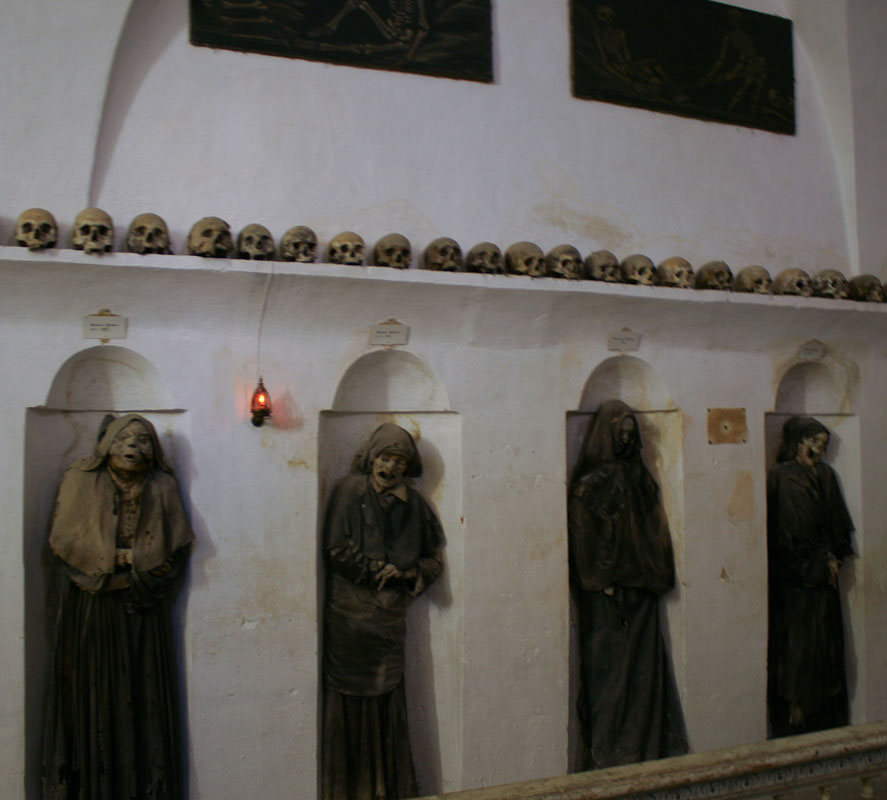 The surviving mummies in Oria are lined up along the walls of the crypt, while those that have perished are kept as skulls.

In memory of past hardship

The answers arrived with a very nice and charming warden, who told us that the crypt was built in 1484 as a place of prayer to remember the young men from Oria who did not return from the battle against the Turks at Terra d’Otranto (1480-1481).The following centuries pirates were constantly attacking Puglia, and the locals organized crusading armies to fight looters. To make sure that posterity would remember these hardships, some citizens asked to be preserved and have a place in the crypt. The mummies in Oria were not ordained or members of monastic orders, but ordinary people of different times and ages as reflected in their burial clothes.

After death, the men who had declared their wish of mummification in front of an assembly of no less than 40 peers and family, would have their brains sucked out through their nostrils. Intestines would be removed and replaced with chalk and fragrant herbs, and the body would be submerged in more chalk for at least two years. It was a very costly process, only the rich could afford.  After two years dehydration, the family of the deceased would be obliged to clean the corpse, dress it and place it in the niche. The mummification was conducted 20-30 times from the 1700s to 1858, even though the Napoleon edict of Saint-Cloud prohibiting burial in churches for hygienic reasons was issued in 1804. Still, only 22 mummies have survived to the present.

The crypt is below ground level and some years ago it was flooded and half the mummies in Oria dissolved. Their skulls are now stacked on the shelf, ready to give visitors a good scare.

This article was last updated in February 2018

Story behind the Anagni Slap 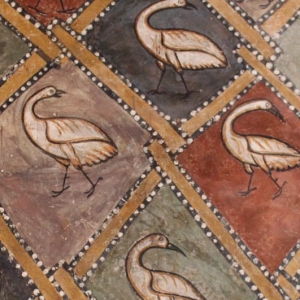 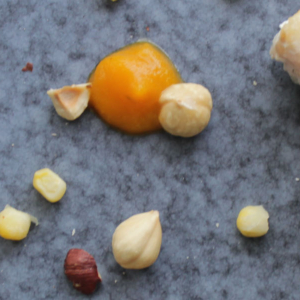