Towns and villages all over Italy have their own rites and traditions that are reenacted at the same time every year. One of the is the Easter passion in Oria.

Most of the time, Oria is a quite ordinary Salento town with 15 000 inhabitants, cattedrale, castello ‘Svevo’ and – in clear weather – a nice view of two seas. But Palm Sunday the town takes a trip in a time machine and transform into Jerusalem 2 000 years ago. Easter passion in Oria is a spectacle to compete with the pilgrim walk in Francavilla Fontana or the easter processions in Taranto. 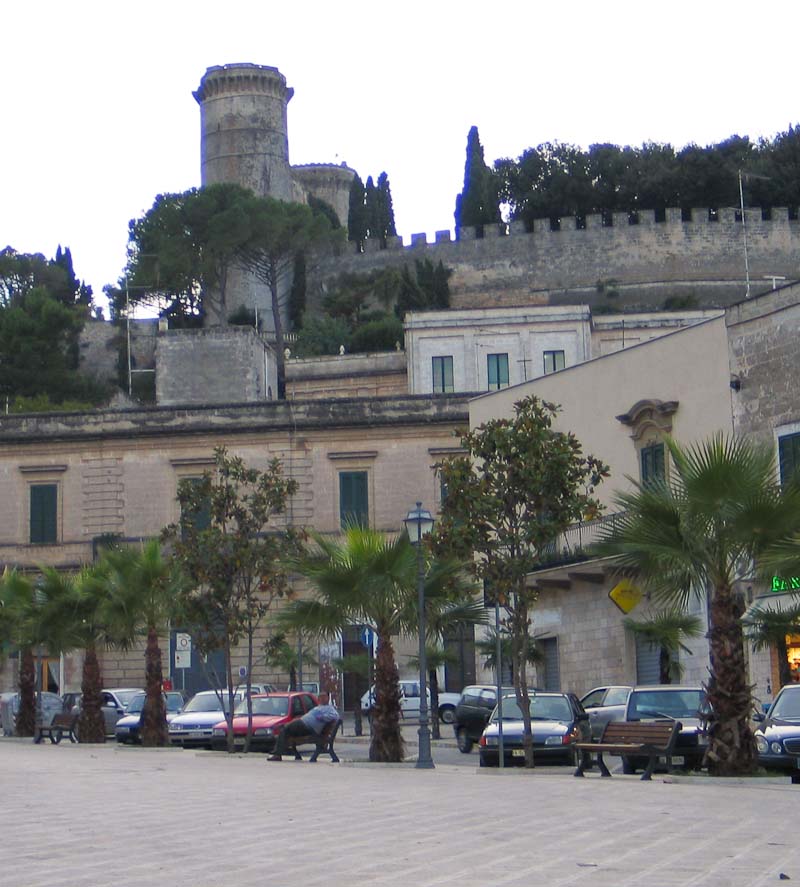 Easter passion in Oria takes place in front of the Medieval castello and in the narrow streets of the old borgo.

Every year, local churches and enthusiastic citizens stage ‘La Passione’ or Easter passion in Oria. A play presenting the last days of Christ as a kind of total theater with a richness of details, props, extras and locations to make the drama all the more vivid and real. For the spectators it is almost like being present in Gethsemane and on Golgatha and witnessing the crucifixion of Christ.

Waiting for the betrayal

According to lamppost announcements, ‘La Passione’ begins at 7:30 pm, but Southitalians live by their own watch. After one hour a small group has gathered in the cold March evening, but the organizers are still testing mikes and speakers, and when spotlights are turned on they reveal nothing but the outline of a meadow with a few olive trees. In the background the dark, bombastic castle looms and a few priests try hard to keep track of the more than 200 participating amateurs, who are eagerly adding the finishing touches to their costumes.

Finally, loud cracks and whistling become decipherable words, and a speaker or tape recorder reads the Gospel, while Jesus and his apostles enter the scene. In a corner Judah can be glimpsed accepting the 30 pieces of silver, he gets for his betrayal, a table is set for the last supper and Jesus is anointed. It is amazing how Bible history suddenly becomes alive.

Knights on horseback in Medieval streets

Every Easter scene in the Holy Book is acted out without shortcuts or popular abbreviations. And the drama, the setting and the atmosphere provides the impression of watching Leonardo da Vinci’s Last Supper or a painting by Giotto in a 3D Avatar version.

As the evening gets colder Jesus starts shaking with death throes under the olive tree, and the audience sighs in relief when the Savior is apprehended and escorted through streets lined with palm leaves and olive boughs to an open piazza, where the spectacle continues with the addition of knights on horseback. The horses seem nervous due to the crowd and the narrow streets, but everything is under control, and the audiences applaud to show their appreciation.

Easter passion in Oria culminated around midnight, with the resurrection of Christ, and finally the town is ready for Easter.