The story behind the Anagni Slap

If you google Anagni you will immediately be guided towards the Anagni Slap, but things become murky, when you try to find out what this act of violence involving a king and a pope was all about.

The B&B where we stayed in Anagni was just across the street from the entrance to Dimora Mirabile, which is the poetic name for Palazzo di Bonifacio VIII. From a distance the palace looks more like a castle: A cluster of buildings erected at various times between the Xth and the XVIII centuries like a medieval mountain of grey stone on top of the ridge, where the historic centre of Anagni balances. Not a particularly attractive or enticing sight, if you ask me.

A sign by the entrance of the palace invited us in to see the ‘room of the Anagni slap’, so after having enjoyed the free sights of town and visited the cathedral, I was curious to see what all the fuss was about. After all, slaps have been exchanged in most rooms over a certain age without leaving indelible marks, so it was hard to envisage what this small museum located in a corner of a nunnery for Cistercian Sisters had to show for itself. 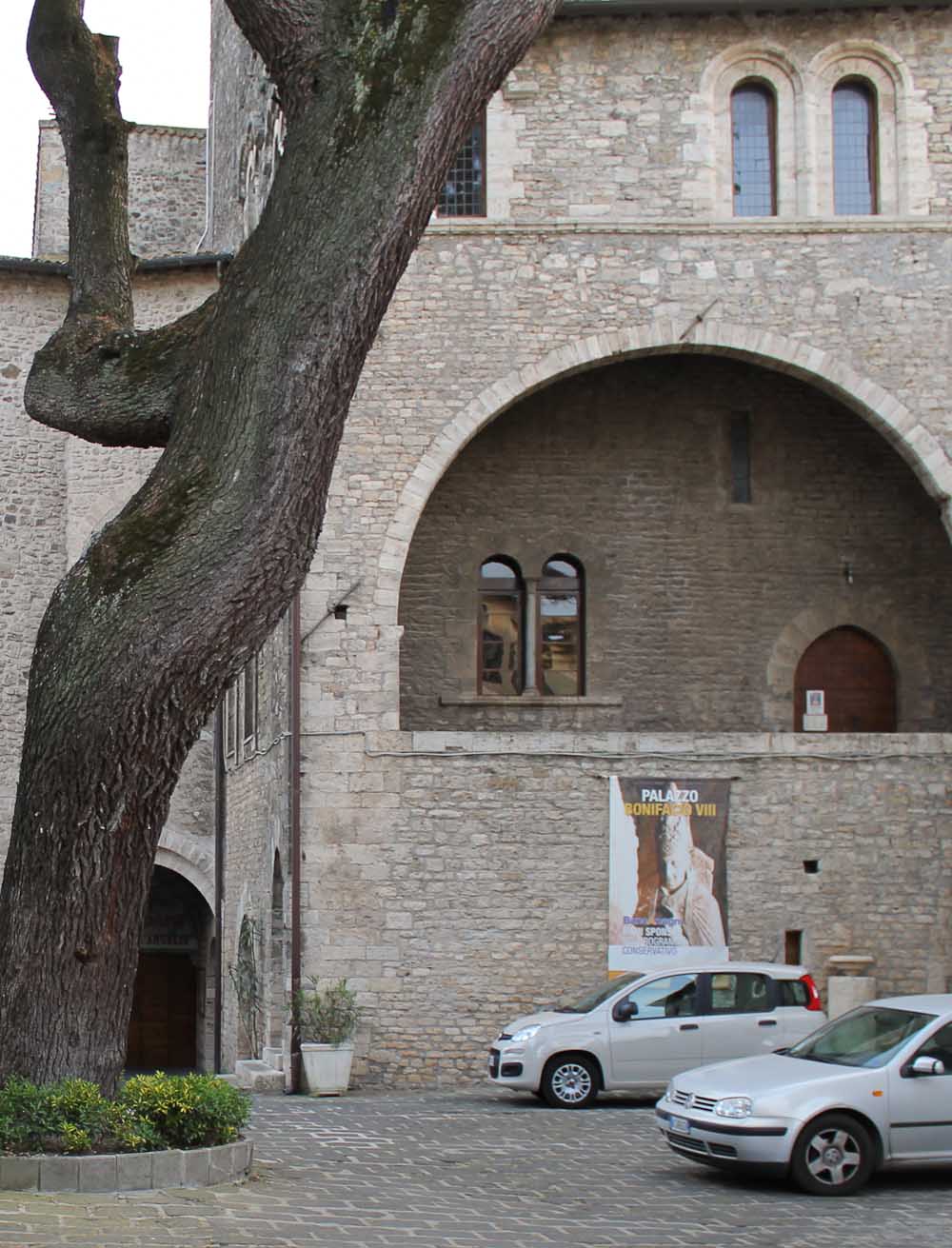 Dimora Mirabile is the palace or castle, where popes lived from the XI to the XIII centuries. Today the building houses a nunnery and a small 3-room museum to the Anagni Slap.

Other visitors may have had the same reservations, for after having paid an entrance fee of 3 euro per person, we had the premises to ourselves. Being a lazy sod, I tried to persuade the lady custodian to tell me the story of the Anagni slap, but she just made an enigmatic statement about the slap being ‘more moral than physical’ and handed me an English leaflet describing the history of the place.

At a cursory glance the leaflet says more or less the same as the various websites describing the Palace of Boniface VIII as the scene of important events. Visit Lazio writes that:

“In 1230 Gregory IX received Frederick II of Sweden, King of Naples and Sicily and Emperor of the Holy Roman Empire, to seal the Peace of Saint Germain-en-Laye which put an end to the bitter power struggle between the Church and the Empire. In 1303 the advisors of the King of France, Phillip the Fair, Guglielmo Nogaret and Sciarra Colonna, entered the palace where the Pope was staying and the famous outrage of the papal slap took place in one of its rooms.”

The problem with this text is that I’ve never heard of Frederick II of Sweden, even though he is supposedly from my corner of Europe. Google reveals that he only appears on Italian websites, so he is probably just a mistranslation of Federico di Svevia also known as Federico II, who became Emperor and King of Sicily. This might fit within the time frame. Yet when I google the Peace of Saint Germain-en-Laye, I learn that it took place in 1570 more than 300 years after the death of Bonifacio VIII. I guess, they are referring to the Treaty of San Germano, for then the story and the museum start to make sense. 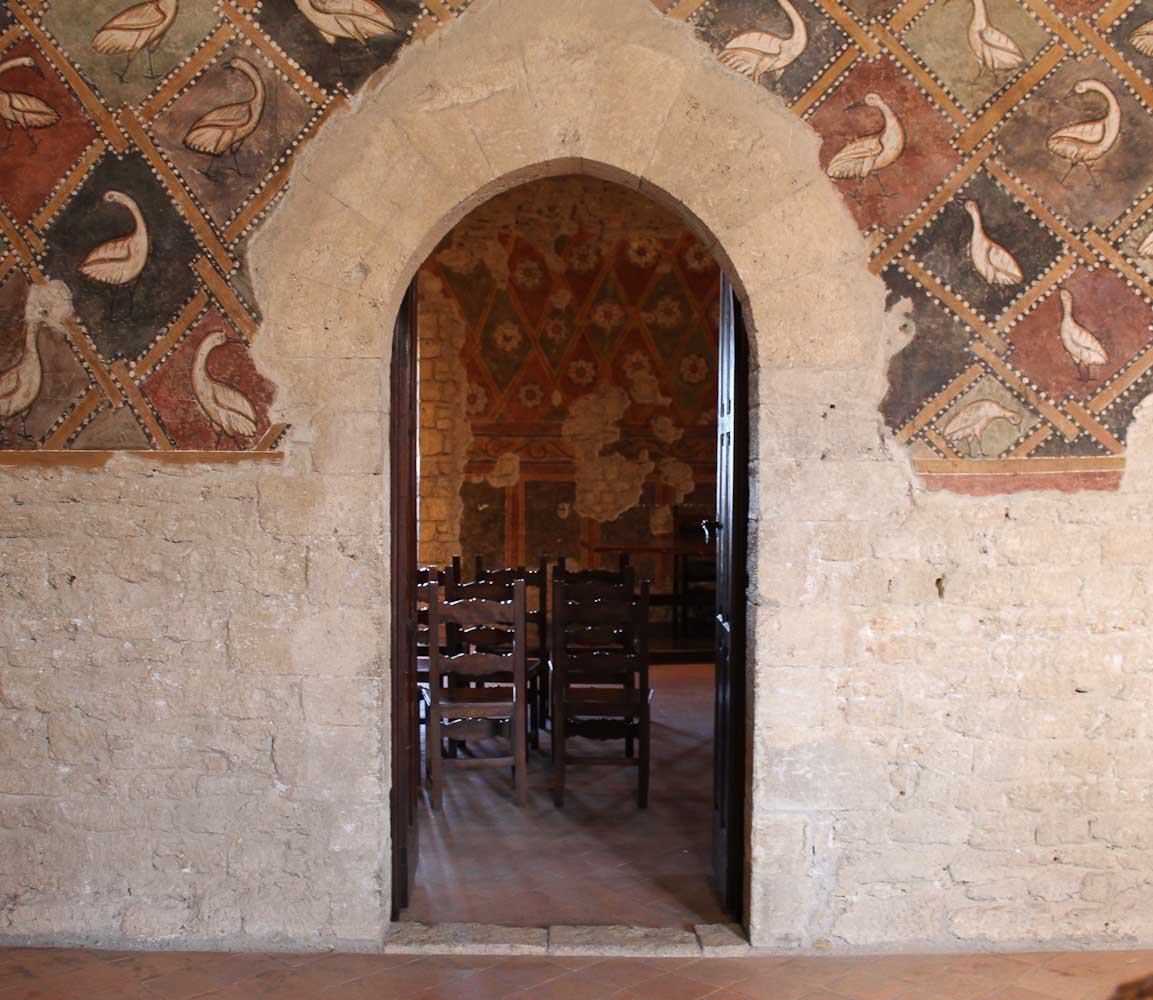 The Sala dello Schiaffo seen from the room with a XIII century hunting guide on the wall. Perhaps made in honour of Federico II. The frescoed walls are the main attraction of the tiny Slap of Anagni museum.

For various opportunistic, feudal, hygienic and political reasons, popes in reign from the XI to the XIII centuries used the palace in Anagni – part of which has now been turned into the museum – as their place of residence. This was where they entertained the likes of Federico II. At the time when Federico II visited Anagni in 1230, the best artists and cosmati masters were busy decorating the crypt and the floors of the cathedral. These artists might also have been working on the Papal palace, which was continually extended and amplified to accommodate not only the administration but also the Pope’s family.

In other words Frederick II, who was an avid falconer, could have inspired the decoration of one of two frescoed walls that are the main attraction in the museum in the papal palace. The room known as sala delle oche has a wall decorated with a birdy pattern in diamond squares. The birds are quite similar and could be geese, but differences in the length of their beaks, the necks, the size of their body and the position of their eyes indicate that the artist has tried to capture various species. For this reason, the wall is seen as a hunting guide that might have been designed to please Federico II and facilitate the negotiation of the peace treaty between church and empire. 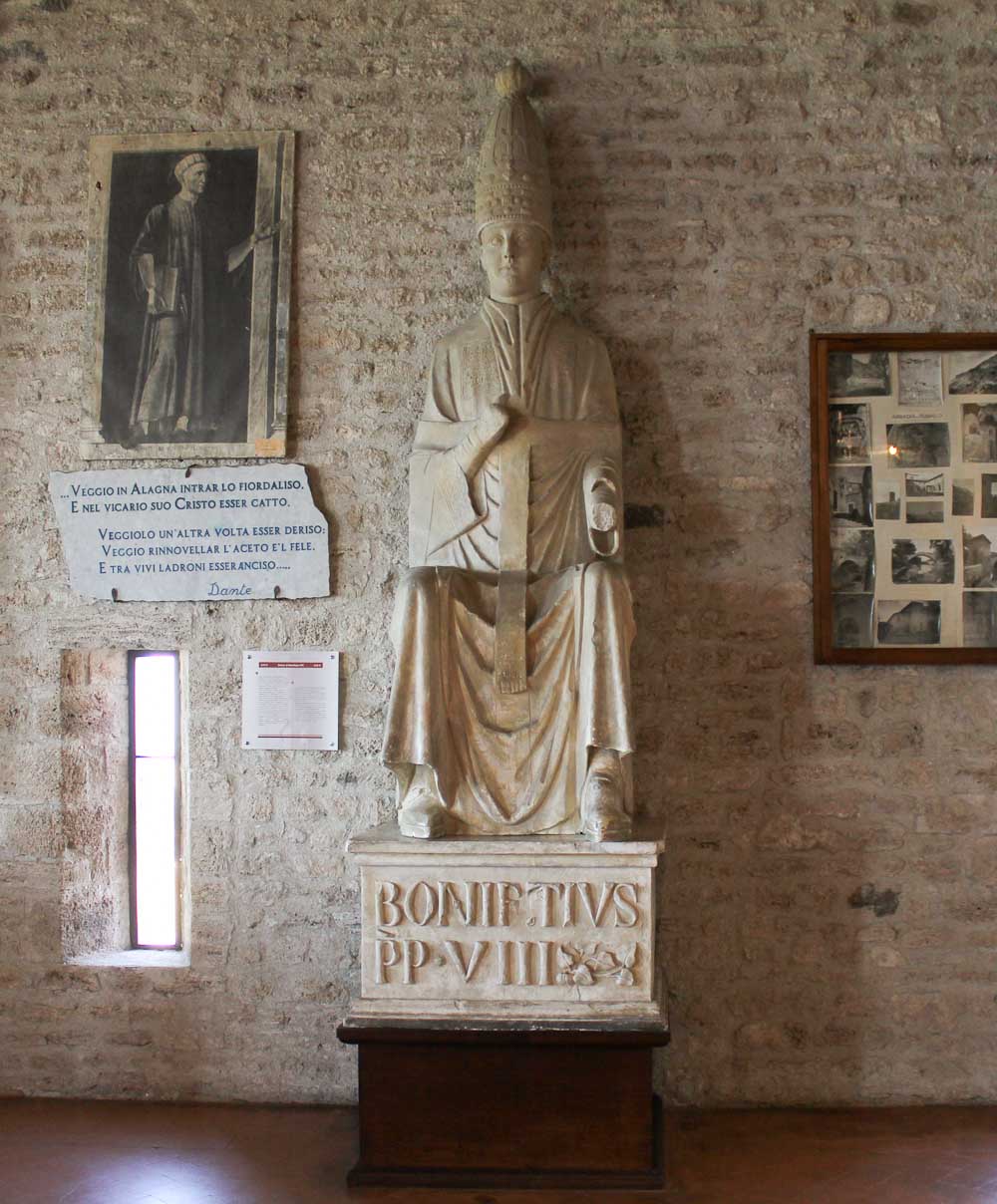 A statue of Bonifacio VIII sits in the third and final room of the museum. On the wall behind him, there is a quote from Dante’s Purgatory XX verse 86-90, where he blames the French King for an action that is tantamount to an attack on Christ himself. The English translation of the text says: “Past ill and future, lo! the flower-de-luce Enters Alagna; in his Vicar Christ Himself a captive, and his mockery Acted again. Lo! to his holy lip The vinegar and gall once more applied; And he ’twixt living robbers doom’d to bleed.”

The other room is the famous sala dello schiaffo, where Pope Bonifacio VIII lived at the time of the Anagni Slap. The frescos in this depict chess boards among a repeated flowery pattern, that could be a symbol of military battles and strategy or love games the Knights would play with the ladies. There is, as the woman selling tickets explained, nothing physical or visual to link the room to the events of the early 14th century.

Apparently Bonifacio VIII had acquired a taste for power politics and he wanted to be both pope and emperor. The King of France and the King of England, Edward I, wanted to get their fingers in the church pie by taxing the clergy, but every time they tried to collect money the Pope issued a educt stating that the church reigned above the monarchy and granting the ecclesiastical financial immunity.

In the end, the Kings decided to send an envoy to Anagni, where the Pope lived. Bonifacio’s palace was attacked, the Pope was seized and abused and after three days he surrendered to an army of a few hundred soldiers. This was the slap with an iron glove, the King of France’s representative dealt to Pope Bonifacio. After having surrendered, the Pope was placed in custody, the papal administration was transferred to Avignon in France, and Bonifacio VIII died a few weeks later far from his chess boards and birdy wallpaper in Anagni.

In other words, the museum’s claim to Anagni Slap fame is tenuous to say the least. But the colours on the frescoed walls are nice, and museum helps to highlight a historical event with far-reaching consequences for the Papal States.

How to pickle and preserve fennel

Mummies in Oria
Scroll to top