Thoughts sitting on the deck of the Ferry to Sicily: A floating rust pile with a phenomenal view of Sicily and the Calabrian coast.

It is always a little stressful to arrive at Villa San Giovanni to catch the traghetta to Sicily. After hundreds of kilometres weird highway driving with non-stop stop / go traffic, locating the ferry seems suspiciously easy. The long waiting bays are eerily empty, but it does not dawns that there may be competition on the ferry crossing, before the ticket booth, where I am asked to choose between a single ticket costing 25 euros and a return ticket with 1 euro discount. I make the mistake of buying a return ticket, which means that we will have to find a specific ferry berth at the port of Messina, when we are going back to the mainland, but that pleasure is fortunately far in the future. Right now the challenge is to find an open bow door.

We manage with help from a man, who sticks his smoking torso through the window to check the ticket. In his opinion we are just in time for the departing ferry, but we have to hurry. This will save us a twenty-minute wait. An electric cable and five men, who are deeply involved in some kind of repair, block access to the ferry. But after a few minutes with no eye contact, a pair of wheels over water and a pair of wheels on land, we drive over the cable. This does not seem to bother the workers in charge of the tool at the end of the cable, but the man standing at the opposite end, authorizing loading in the nearly empty ferry, becomes furious. No one should drive back or forth, without him giving the go ahead, and it takes a load of excuses to make him smile again.

Five minutes later, we are sitting on the deck of a floating rust pile, enjoying the phenomenal view of Sicily and the Calabrian coast. Crossing the Strait of Messina is just as beautiful as a trip over Bospherus, despite the lack of tespits, tea serving and dolphins. Instead there is an imaginary shadow of Mount Etna and the other boats that all make a detour to the north, before they sail along the coast of Sicily. After a good half hour the ferry reaches port, and the effort of finding a way out of Messina provides a nice opportunity for sightseeing. 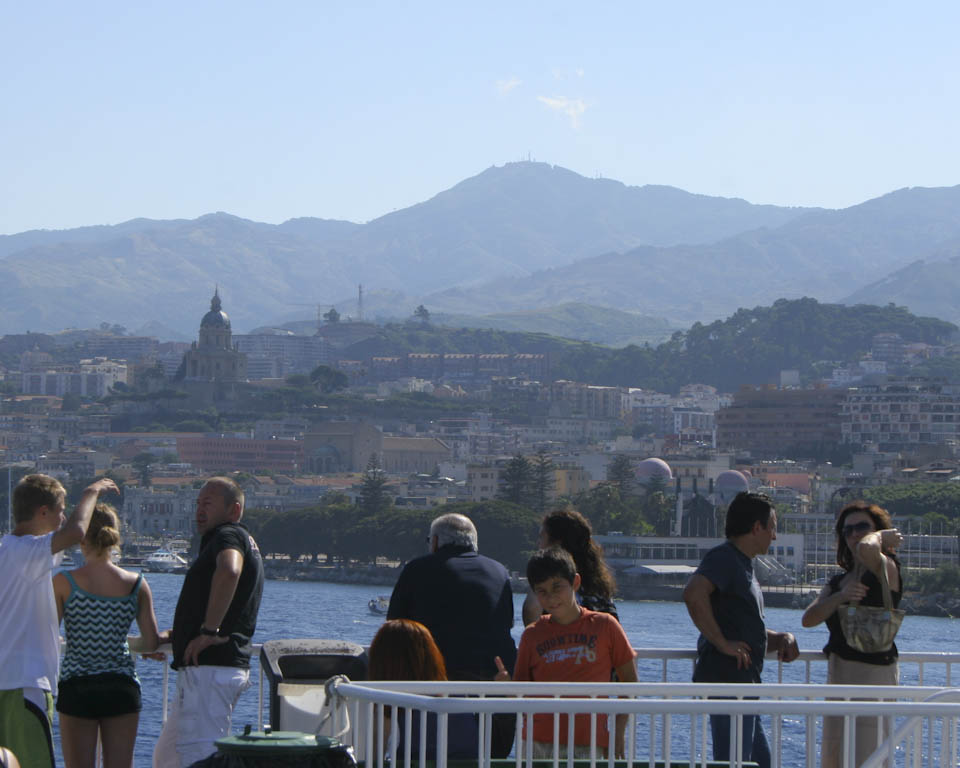 Some days later the return trip offers new challenges. First it is difficult to identify the right ferry, and then the signs disappear in dense rows of parked cars. Below a bridge the road misses half a metre of asphalt, and the sound of the chassis hitting asphalt hurts tax-ridden Danish car owners. Immediately afterwards tears start running, when we pass the smelly, black smoke from a tire burn. And down at the ferry berth there is still no end or ferry in sight, but a friendly port worker says, we just have to cross the railway lines, and drive through build up container rows to reach the car ferry. Transport logistics are not the strongest point in these parts.

It may well be, that Homer in The Iliad and The Odyssey

exaggerated his description of Scylla, the many headed monster that guarded the entrance to the Strait of Messina and ate sailors, who came close to shore, while the whirlpool Charybdis pulled one vessel down after the other, but strong currents do make the Strait of Messina dangerous and unpredictable. Just like signs and access ways challenge tourists trying to navigate the harbour area before boarding a ferry.

Other things to see than the ferry to Sicily

Messina Port and the blessing of a golden Madonnina

Puglia and the traditional Tarantella dance