The town Noto sums up baroque Sicily. And walking down the golden Corso Vittorio Emmanuele in Noto is like entering the stage set of a play from the early 18th century.

The richly ornamented buildings tell rambling stories of vanity and wealth that left me with a deep sense of wonder. What were the builders and architects trying to prove?

The facades jump out at you or hold their breath as you pass by in a complex concave and convex flow. Straight iron railings won’t do for the protruding balconies that are embellished with curved and flowering wrought iron balustrades. And every time you look over your shoulder, you’ll be faced with an austere saint or grotesquely grinning putti.

If it wasn’t for the friendly atmosphere and the warm, golden colours, the experience could be a little scary. 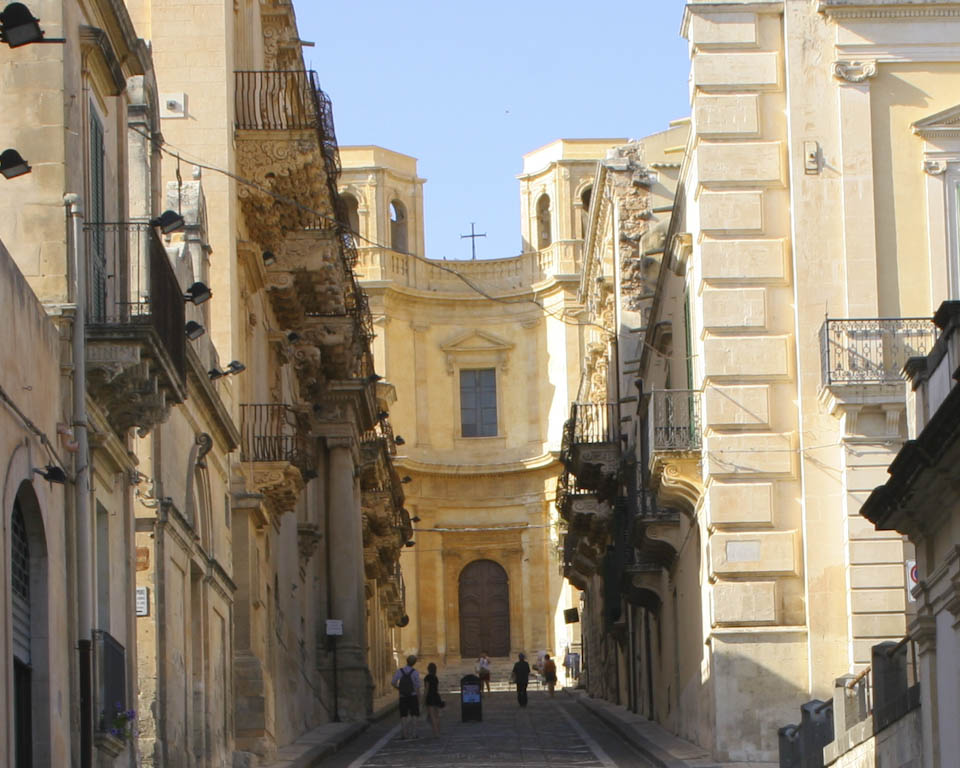 A concave church front marks the end of the street.

That probably hasn’t been the intention, when Noto was rebuilt after the great earthquake in 1693.

More likely the church and local aristocracy wanted to show off by outdoing the baroque buildings in Florence, Rome and Naples.

This led to an elaboration on the mainland style that was merged with local features in the creation of an architecture that was distinctly Sicilian. The grotesque masks, balconies and canted facades are among the characteristics of Baroque Sicily along with built-in belfries, visible church bells and building blocks or bricks carved with leaves, flower arrangements, fish scales or sea shells. It all goes to prove that architecture can be highly entertaining.

If the builders and architects have tried to impress posterity, they’ve certainly succeeded with me. Even if I’m only an extra passing through Noto before curtain fall.