A Italian-Canadian cultural society arranges active holidays around Altamura, where foreign archaeology students and tourists can dig for treasures while they stay in an old masseria.

In the summer, masseria La Selva between Altamura and Matera buzz with activity. Students and travelers from all over the world spend their holidays in a beautifully authentic, south Italian farmhouse, while they take part in various volunteer projects or brush down skulls and bones or pottery shards and loom weights at nearby archaeological sites.

– The archaeology students, who are mostly from Canada, work in two teams excavating an ancient burial ground and a Roman villa. We can’t get that kind of practical experience in North America, so it’s a great opportunity to come here. Even if it means going to work under the hot sun from 5 in the morning, one of the team leaders explains.

Two Dutch girls have signed up for an art restoration programme that also entails handy work and maintenance around the farm. A couple of Irish girls help to look after twenty Italian children below the ages of ten who take part in La Selva’s English summer school. The programmes are organized by the cultural society Sinergie – now Messors – founded by the Italian-Canadian Tonio Creanza and  three colleagues from Altamura. They are passionately enthusiastic. There’s a constant gesticulating and running around to prepare food, pick up this or that group of visitors and preparing outings and sightseeing trips to Pompeii, Altamura or nearby Jesce, where the consortium  did their first  large scale preservation and restoration project.

A Resting Place on Via Appia

Jesce was a kind of Roman filling station on the Via Appia – a place where people and horses could feed, rest and exchange goods while being on the road. Basically it looks like a masseria or fortified farm surrounded by the characteristic stone walls constructed without the use of mortar. The Sinergie archaeologists spent several summers of hard work disassembling and reconstructing the 2000 year old walls, in what Tonio calls a sustainable restoration project, where all labour was free and nothing was added and nothing was taken from the site.

He cannot hide a certain bitterness against the local authorities who decided to bring in a ‘professional’ contractor halfway through the archaeological project. The contractor paved most of the masseria grounds over with modern tiles, established electric uplights along the edges and fenced the whole place off, so we have to climb a two metre high gate to have a look around. Tonio still has the keys to the building and can show us modern camp facilities such as bathrooms and dormitories mixed with crumbling Roman frescoes. All to the benefit of about 50 swallows nesting in the corners and under the ceiling. It’s a crying shame and a waste of money.

But fortunately the people from Sinergie like Tonio and the archeology volunteers don’t give up but move on other projects that help to preserve history and heritage around Altamura. 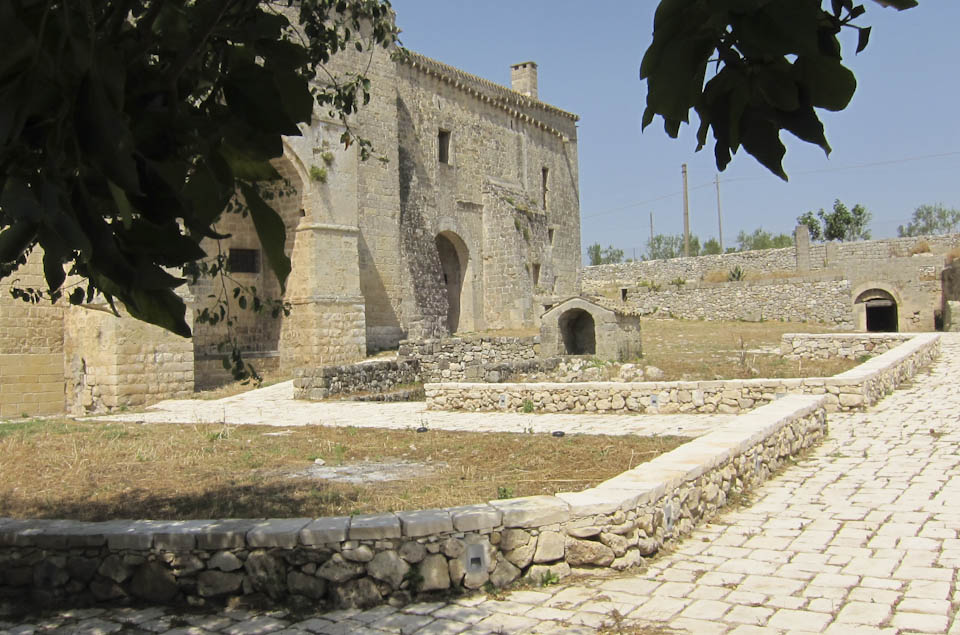 Jesce – an ancient tank stop on Via Appia. Now with modern paving.

More on history and heritage around Altamura