There are several cave towns in Puglia. Share the fascination of these fissured and cracked up places along the instep of the Italian boot.

Puglia is a cracked up landscape. The karst plateau known as the Murgia has a splintered and fractured surface, leaving deep ravines running between and through towns that have to be patched up by viaducts and bridges. 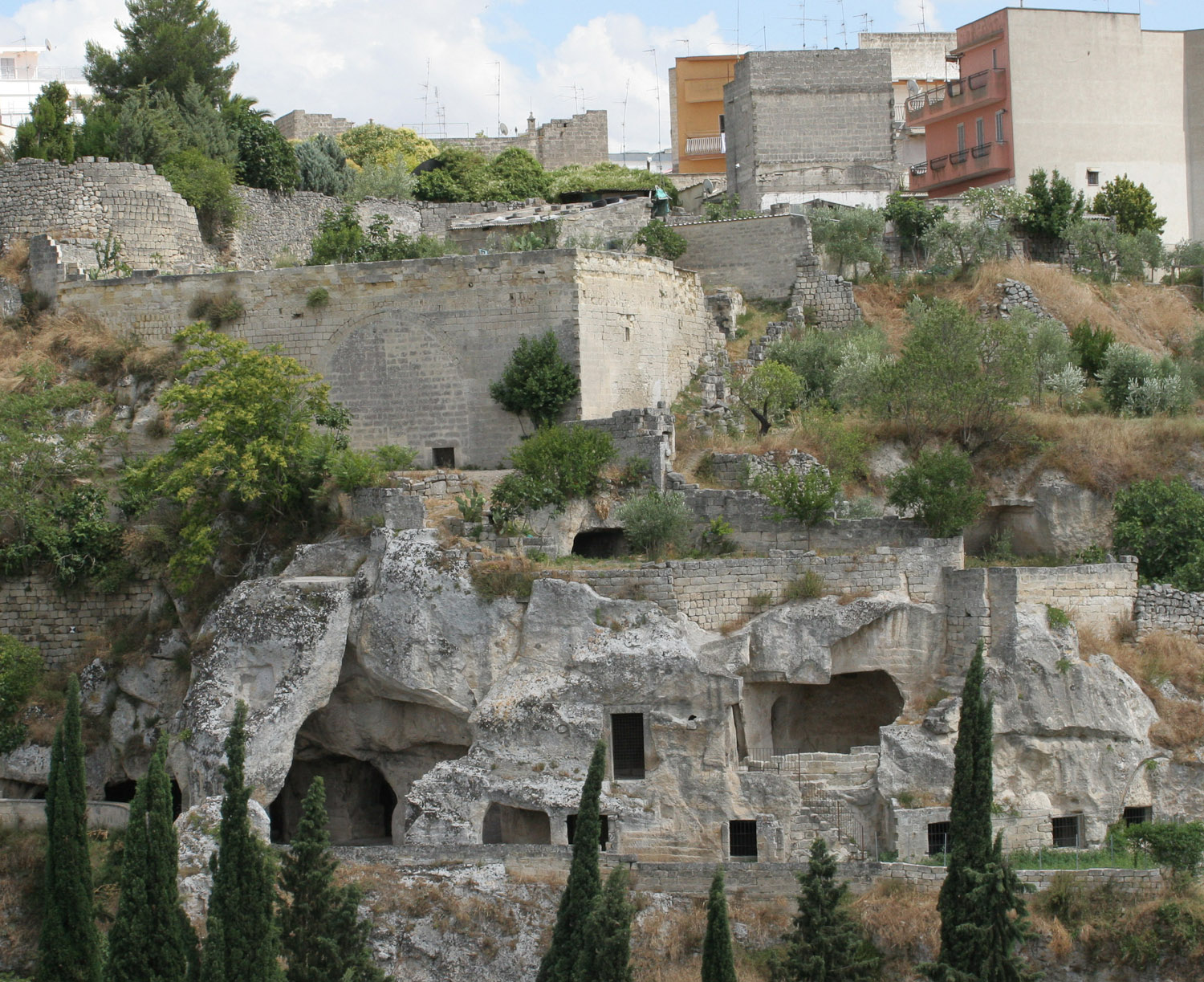 The caves in Gravina in Puglia seen from across the canyon.

Through time the ravines served as perfect hiding places for outlaws, hermits, ethnic minorities and people prosecuted for their religious beliefs. The so-called ‘puli’, dolines and sinkholes formed by natural phenomena like water and erosion provided some kind of shelter, and the soft limestone made it easy to carve out caverns.

Some of these places are regular cave towns with several abodes, crypts and churches , and today they look exactly as they would have looked 500 or 2000 years ago: As a kind of prehistoric housing blocks. I find the ravines highly evocative and intriguing. Nevertheless, they don’t appear in the leading guidebooks, which is why I like to include them in my favourite Puglia itineraries.

The cave towns in Puglia can be found over a large area from the Gulf of Taranto up towards Foggia. Some of these places are more or less inaccessible, unless you know the area and how to navigate the ravines without trails or guide signs.  Still, you can always contemplate the view of the ravines and their implications, if you happen to pass by Matera, Gravina in Puglia, Altamura, Gioia del Colle, Massafra, Castellanate, Grottaglie and other cracked up cave towns along the instep of the Italian boot. 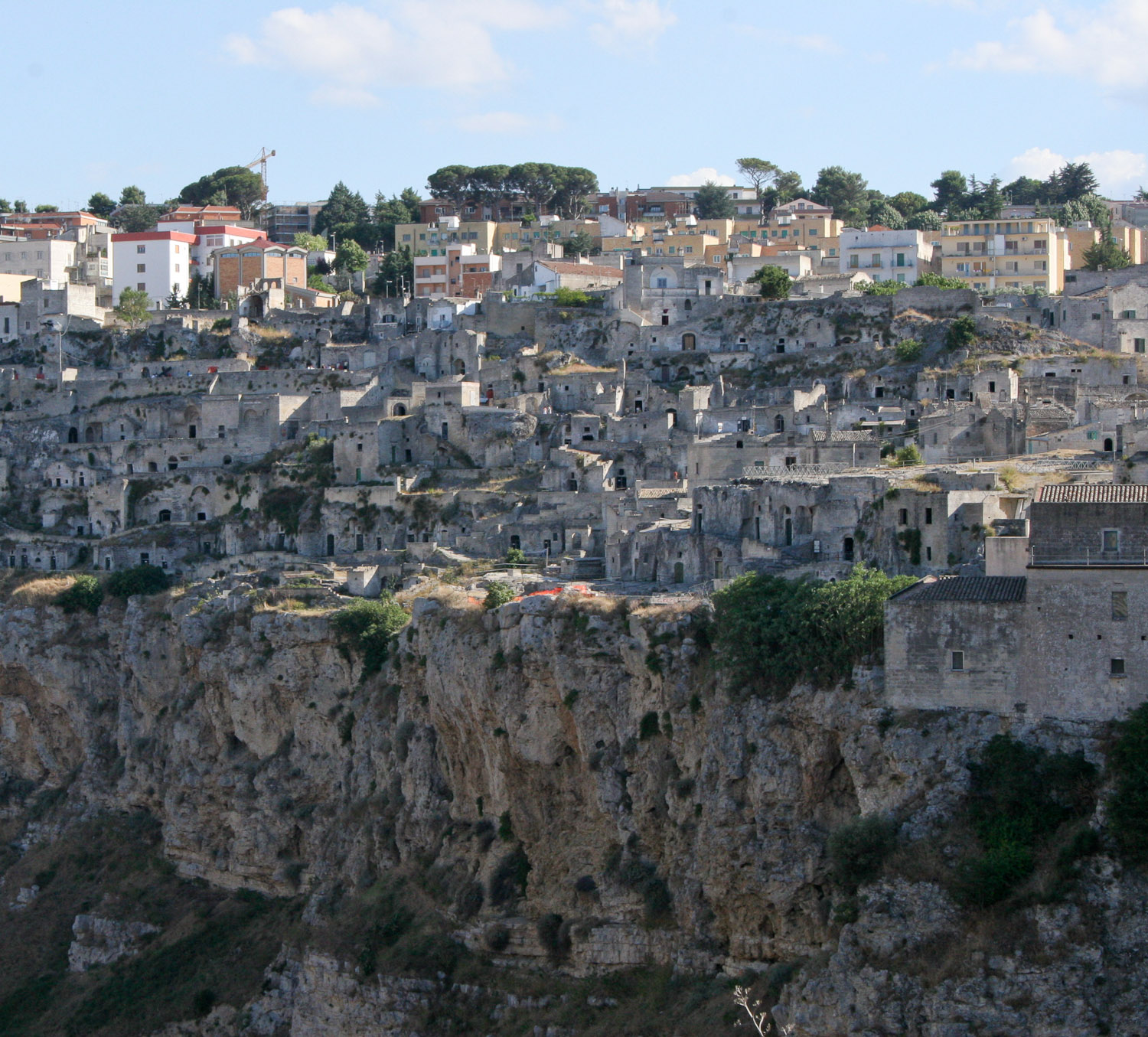 The Sassi in Matera have been built into the side of a deep gorge.

The most famous cave town of all is undoubtedly Matera, which is located in the region of Basilicata, and therefore formally outside the scope of this article. Still, it’s in the area and should be included in a cave town itinerary. 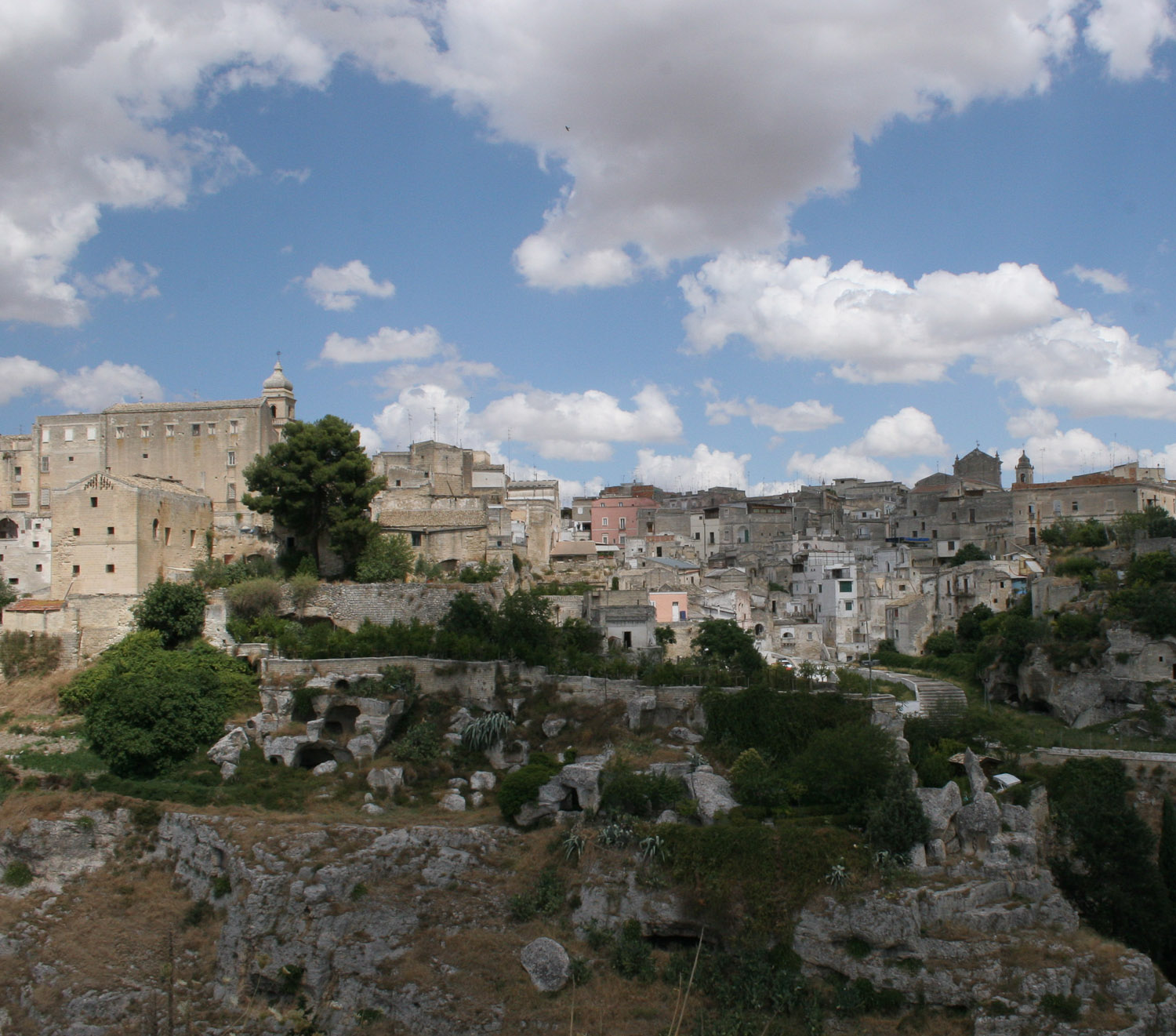 Gravina in Puglia is home to the Alta Murgia National Park. An limestone planteau of  68,077 hectares covered by subtropical steppe. Just beside the city, the Gravina stream tributary to the Bradano river has formed a deep canyon filled with deep natural and archaeological cavities. There are a few vantage points along Via madonna della Stella from where you can enjoy a view of the canyon and the city. It is possible to do a tour of underground Gravina and visit some of the man-made and natural caves beneath the city. 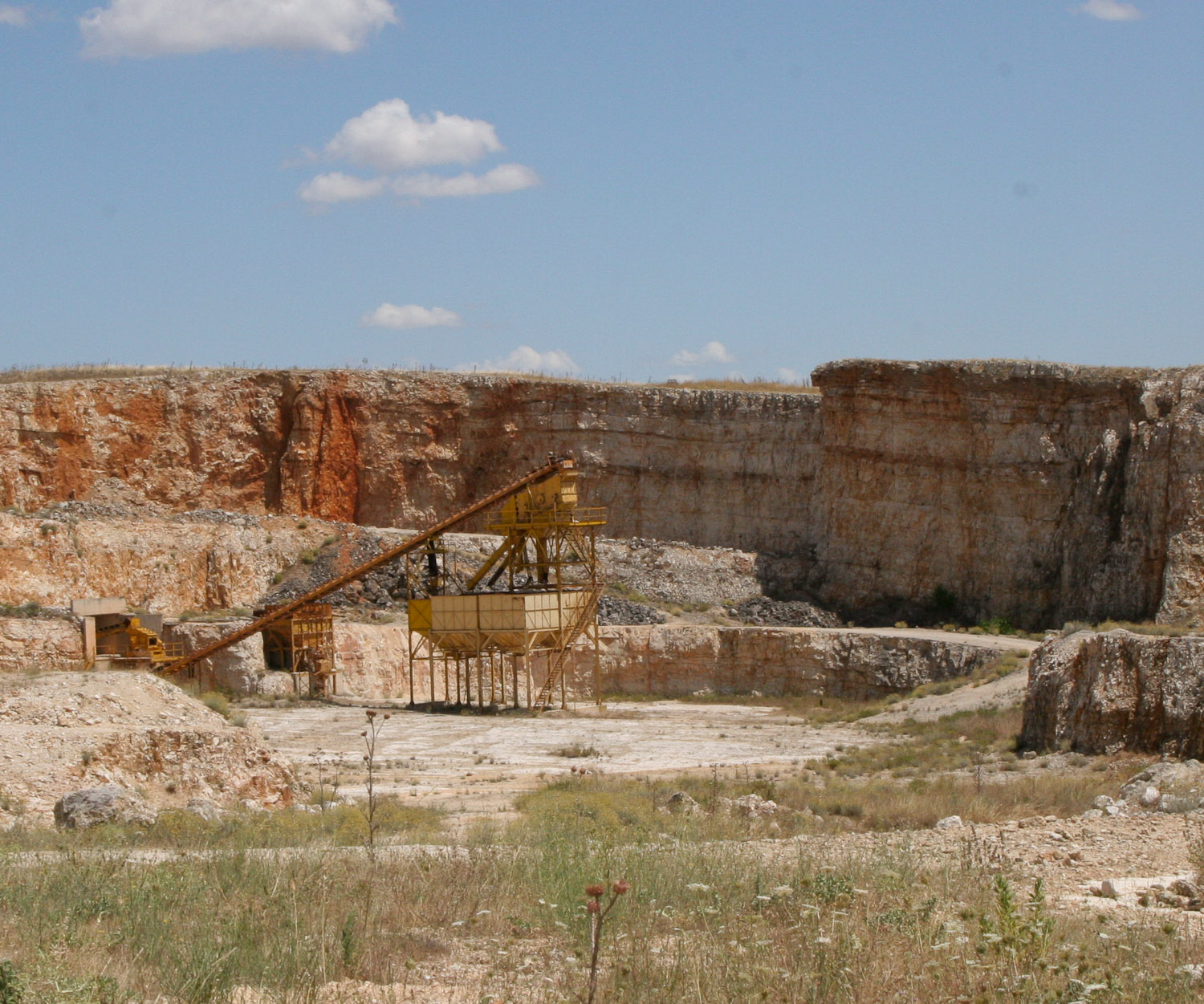 The old quarry between Altamura and Santeramo where geologists have found numerous tracks of dinosaurs.

Altamurra claims to be the riches paleontological field in the world. Intact 30.000 year old dinosaur tracks have been identified in a former limestone quarry, and a perfectly preserved hominid skeleton of  an archaic species of man, who lived 200-4oo thousand years ago, has been recovered from a sinkhole known as Pulo di Altamura. There’s a visitor center  in Lamalunga  for the uomo di Altamura,  and it is possible to explore the quarry with the dino tracks, but your scouting skills have to be extraordinary good to identify a Triassic period footprint from other sorts of indentation.

The Laterza ravine claims to be the second largest in Europe and up to 200 metres deep and 12 km long. Birds and wildlife nest in the near vertical sides, while a varied flora covers the bottom of the gorge. 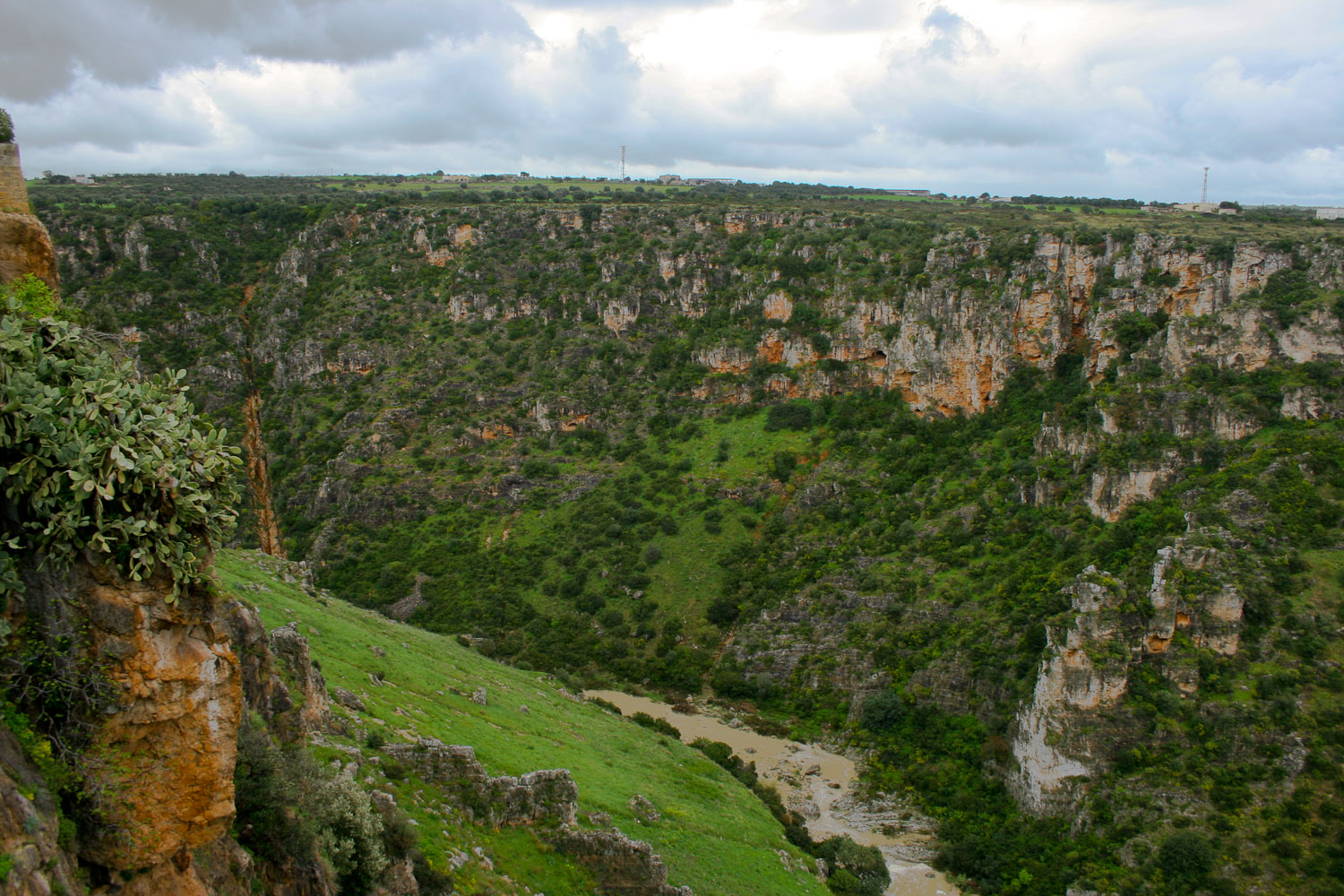 In the rainy season a muddy stream runs at the bottom of the ravine in Castellaneta.

As the native town of Hollywood’s first Latin lover, Rudolf Valentino, Castellaneta has a strong claim to fame, yet the town also deserves recognition for the beautiful green and lush canyon which can be seen from above from Via l’Affissione. 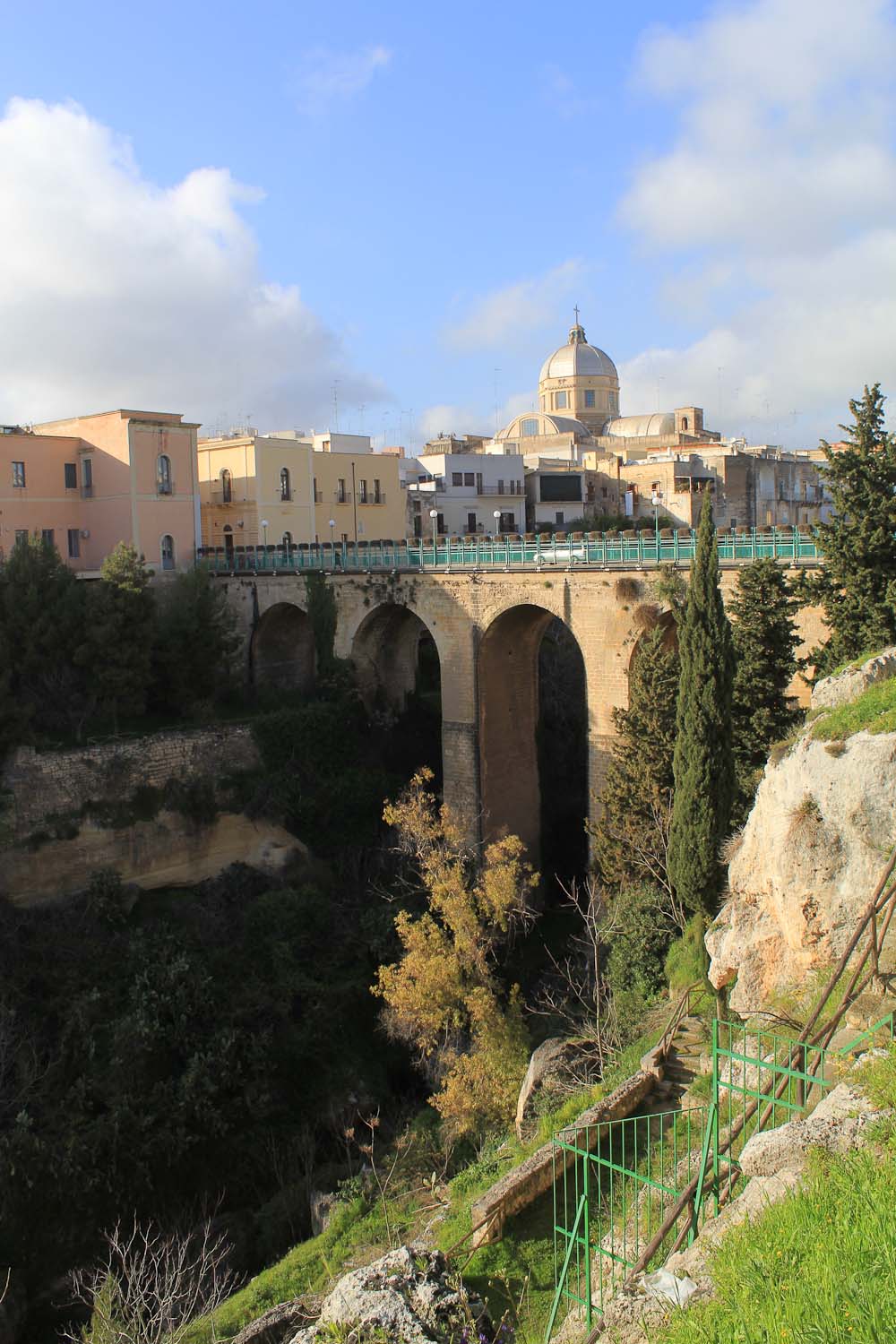 A beautiful church has been built into one of the canyons in Massafra.

Massafra is located on a series of ravines and the so-called lame, which are smaller gorges without steep sides. In facts the town was built between the ravines of San Marco and Madonna della Scala. In the Madonna Della Scala ravine there’s a proper church with vibrant frescoes including a fabulous ochre and gold version of the Madonna with child. 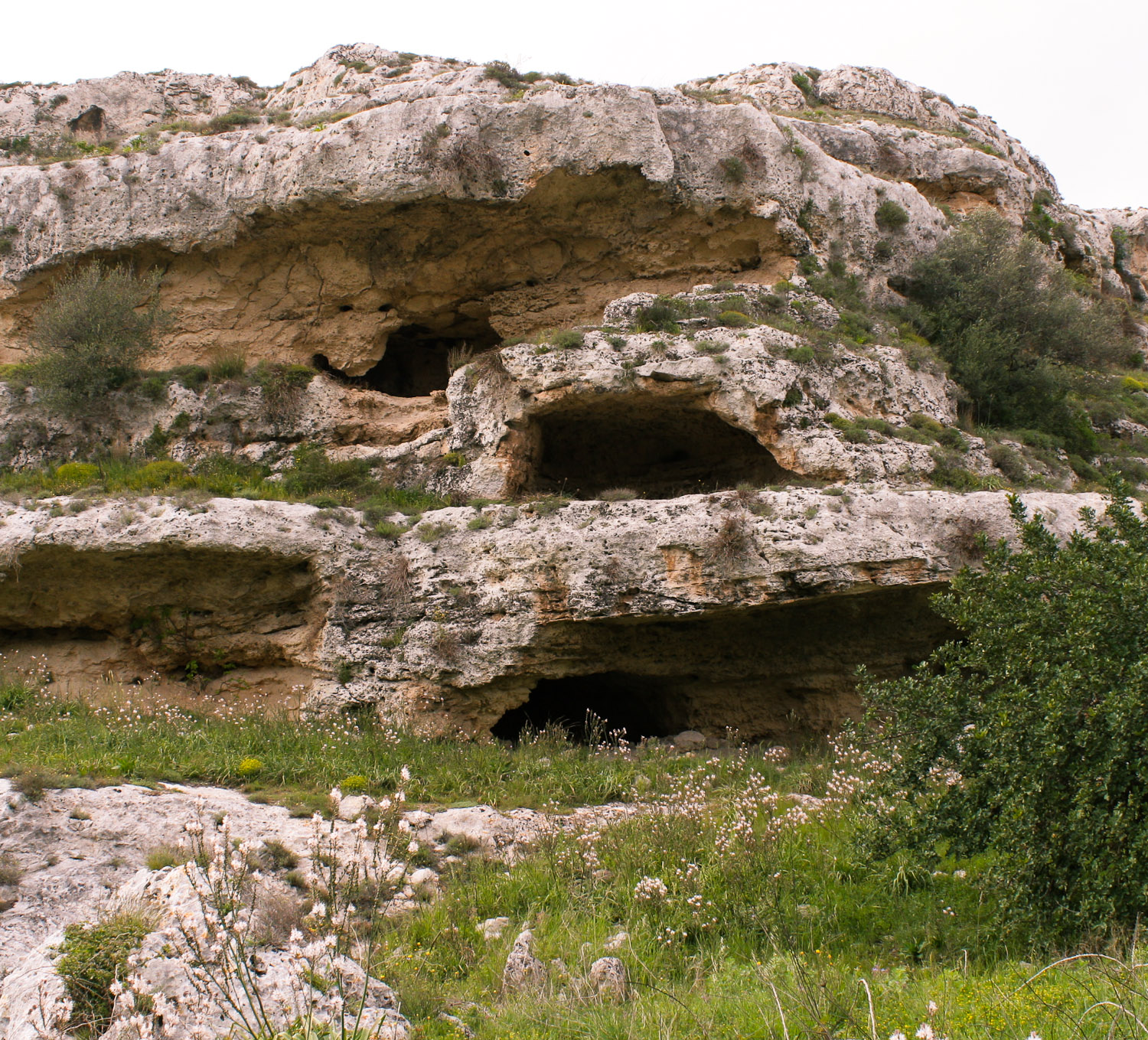 Some of the caves lining the Lama dei Pensieri canyon in Grottaglie..

The ravine right outside Grottaglie is relatively accessible, which makes it very interesting to explore, though there are no paths or tracks to guide the way. We have tried to hike through Lama dei Pensieri once, but after an hour and a lot of twists and turns, the foliage became too dense for my taste. The ravines around Grottaglie contain numerous natural caves in several layers. In one place, there’s a village of 20 prehistoric caves some of which have served as churches and sanctuaries. Landslides, rock slides and crevices, however, make it dangerous to venture too deep into the ravine on your own.