Things to see in Pompeii with kids

A visit to UNESCO World Heritage site Pompeii with kids can be a disappointment, unless you all know what to expect and what to see.


In 79 AD Mount Vesuvius in Campania sprayed pumice and ashes out over the Bay of Naples and buried the city of Pompeii. (See more facts about Mount Vesuvius by following the link) Today Pompeii is a major tourist attraction with 2,5 million visitors a year, but in spite of the fascinating story a visit to Pompeii with kids can be a disappointment. They expect drama and danger and end up with boring old stones.

Admittedly, it has been years since we visited Pompeii and lots may have changed in the meantime, but somehow I doubt that it has become much more kid friendly. I mean, once you are inside there are no ice cream parlours, cafes, souvenir stalls or coin operated rides. Just an endless assortment of stones – some big, some small and some that look like ordinary bricks – pillars and columns interspersed with weeds and – in many cases – a relentless sun. In order to hold the attention of people below the age of 15 for more than 1 hour, you have to be either an ingenious storyteller or your kids must be incredibly well-behaved.

In other words: Next time I’m taking kid to Pompeii, I’ll let them know what to expect beforehand, and we’ll head directly for the places that have more than just stones on display. Like the places listed here: 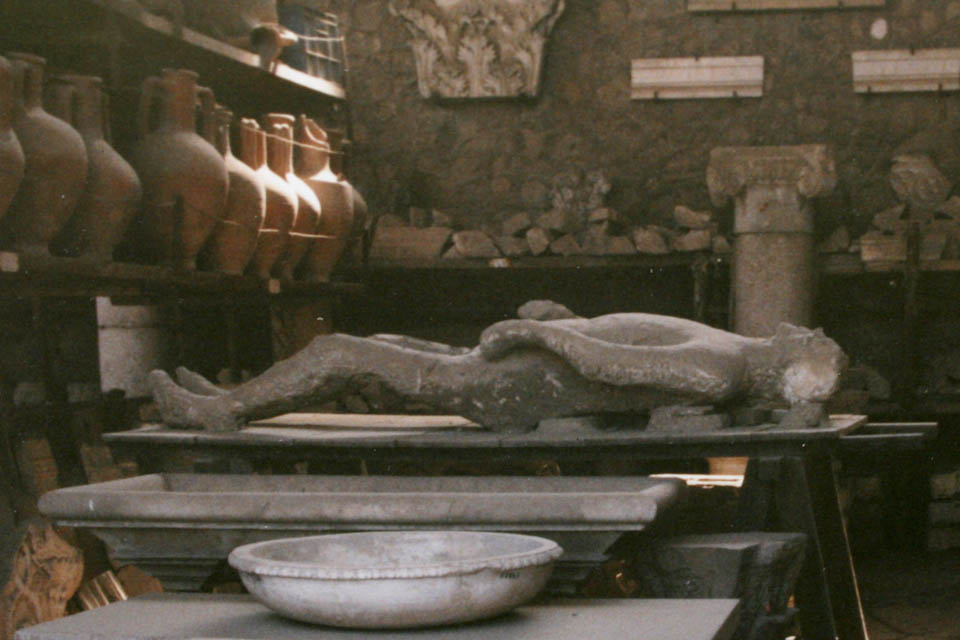 A peek into one of the magazines  where casts and amphora are stored.

Forum Olitorium was an unfinished warehouse at the time of the eruption. Today it is used as storage for archaeological finds. It contains a large quantity of amphora and pottery, oil presses, and architectural elements along with the chilling casts of victims. Even after 2000 years these figures still convey the unspeakable horror of the people trapped in lava, like the muleteer who sits crouched up trying to protect his face from the exhalations.

More casts can be seen in the Garden of the Fugitives near Porta Nocera. These people were imprisoned in ashes and pumice that solidified over time and left cavities in the earth. In connection with the excavations the cavities were filled with plaster giving us the human figures of the disaster.

You have to tell children the story about Pompeii to get them interested in the site.

With good imagination it is still possible to see that Via dell’ Abbondanza was Pompeii’s main shopping street. One of the most interesting houses in my opinion is the Thermopolium with a Lararium. A household shrine, where the family offered food and drink to the gods every morning. The holes in the counter were designed to hold amphora containers, and there are also some nice paintings on the walls.

Odeon is an intimate amphitheater with a seating capacity of about 1500. The kneeling atlantes that carry the world upon their shoulders are touching, while the gladiator barracks appear mainly as a square lined with old pillars.

In the tepidarium of the Forum Baths there’s the brilliantly decorated barrel vault with a nice band of human columns ie. atlantes figures.

Colourful frescoes have been preserved in some of the houses.

House of the Ceii has been attributed to a certain Ceius on account of the election slogans on the façade. Here you will see wonderful frescoes of hunting scenes with all sorts of wild animals, poetry readings and Dionysos pouring wine for a tiger and one of the mythical maenad females.

House of the Vettii is luxuriously decorated with snakes and gods and cupids and putti (and quite a lot of phalluses as well). While Villa of the Mysteries holds a lot of red colour paintings.

The House of the Great Fountain has a so-called nymphaeum or cave shrine to the nymphs. It is faced with beautiful mosaic in coloured glass combined with three tragic masks and a statue of a putto angle carrying a dolphin. Another kid friendly mosaic is the ‘Beware of the dog’ sign in front of the House of the Tragic Poet.

What would you go to see in Pompeii with kids?

Maps were disabled by the visitor on this site. Click to open the map in a new window.
17 replies