Visit Cave Dwellings
in the Sassi District in Matera

The Sassi district in Matera has cave dwellings dating back to the first human settlements in the world. The caves were inhabited up until the 1950s.

In the mid-1930s Matera was a town marked by misery and malaria. In his book called Christ Stopped At Eboli

the exiled Italian writer Carlo Levi recounts his sister’s first meeting with a city, she had trouble finding, because most of the habitations lay hidden in a ravine below the earth’s surface. As a doctor she describes how the residents suffered from malaria, dysentery and severe eye infections. The starvation evident in prominent ribs and swollen stomachs. Caves dug into the ravine where large families lived with their dogs, goats, sheep and pigs. And children begging quinine from strangers to fight the malaria.

From the Cathedral on top of the hill there’s a magnificent view over the Sassi district in Matera.

Today Sasso Barisano and Sasso Caveoso are primarily a tourist attraction. The Sassi in Matera  were formed in continuation of the first human settlements in Italy, and the caves, excavated in cells and layers like a beehive, have not changed significantly over time. In fact, the old city is supposed to resemble the old Jerusalem so much that, Mel Gibson used it as location for The Passion Of Christ.

In the 1950s Sassi dwellers were forcefully relocated to more modern housing, and only recently have the caves been renovated and transformed into hotels, cafes or shops.

Nevertheless a walk through the old streets of the Sassi district in Matera is still a fabulous experience and there are lots of cave churches and proper churches to visit along with the Casagrotta Museum in Vico Solitario. The museum looks exactly like Matera houses did 50 or 500 years ago. A one-bedroom earth cave with fireplace, washstand, agricultural tools, kitchen department, a cradle over the double bed, childrens’ beds in all chest drawers and “room for a pony” in a very real sense.

Tourists still pull a tail of children and adolescents, when they walk around the old city. But instead of malaria medicine, local youths asks for money for guided tours through the neighbourhood, and their dialect is replaced by a free choice of English, German, French, Italian and Dutch. It all goes to show that the jet age has reached the Sassi district in Matera. 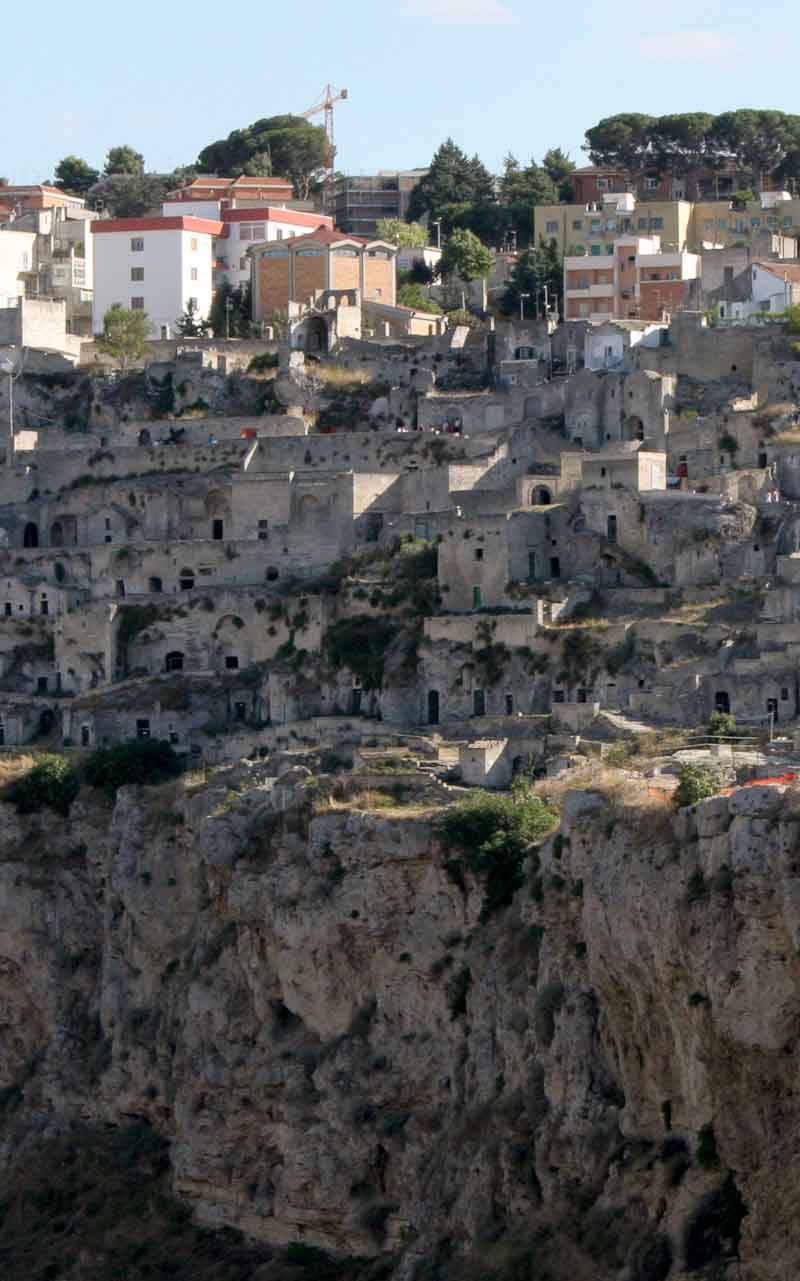 Dwellings in the Sassi district in Matera are excavated in a ravine and people lived in these caves until the 1950s.

Other sights near the Sassi district in Matera

Orvieto: A city in platform shoes