Driving down Europe Road 90 from Reggio Calabria to Taranto resembles a scene from an American road movie.

There is no music score accompanying the drive, but otherwise Europe Road 90 resembles a scene from an American road movie where an endless streak of asphalt stretches out under a blazing sun, while the deep-blue sea, the mountains and deserted yellow plains in the background set a colour scheme to make any Swede happy. Dotted along the way are local workers trying to earn a few euros by selling chili on a string without interference from La Fiamma Gialla; shirtless camionisti with black sunglasses, Christmas light chains in the windshield, Padre Pio dangling under the rear view mirror, and trailers loaded with smuggled goods; and Schumacher clones, flashing their red Ferrari in sleepy holiday villages. A cocktail, that makes Statale 106 one of the most dangerous roads in Italy.

Crashed cars, flower bouquets by the roadside, frequent speed checks and road sections that are blocked by traffic accidents or road works, testify to the latent danger, and turn the 500 kilometres drive into an all-day project. These years the road is being expanded from one lane in each direction to an expressway with four lanes and concrete blocks to separate oncoming cars, but construction takes time, and for the time being long queues is part of the fun. The same goes for the urge to drive faster and wilder when occasional gaps occur in traffic. Mortality on Statale 106 is still above average for Italian roads. 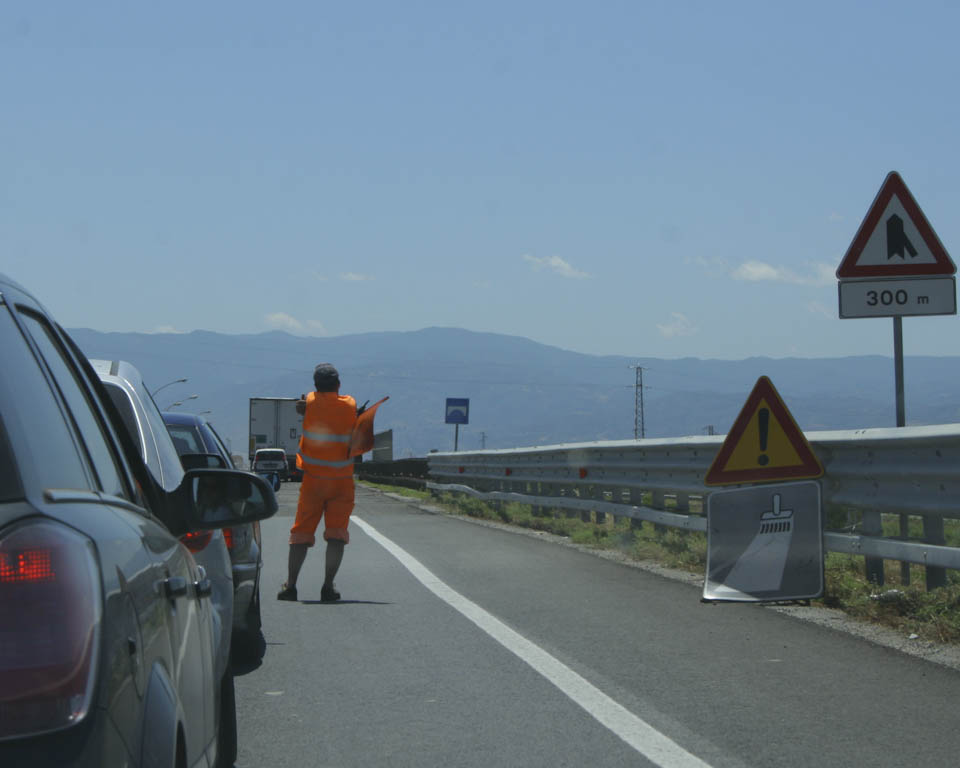 Road works on the Ionian highway can block the traffic for hours.

The road is rich in contrasts other than the contrast between the dense traffic and a depopulated landscape. Electric red plastic palm trees stand right beside the real thing. There is a slot machine for every saint statue. New shopping malls and holiday resorts in bright colours pop up in the neighbourhood of ancient Doric columns. Cultivated agricultural land alternate with forest-clad mountains stretching down to the water’s edge. And the orange groves and eucalyptus trees masks the stench of smelly oil refineries.
Yet conditions have changed radically since the English travel book writer Augustus Hare a hundred years ago warned foreigners against all travel in the South:

“The vastness and ugliness of the districts to be traversed, the bareness and filth of the inns, the roughness of the natives, the torment of zinzare, the terror of earthquakes, the insecurity of the roads from brigands, and the far more serious risk of malaria or typhoid fever from the bad water, are the natural courses which have hitherto frightened strangers away from the south.”
Augustus Hare: Cities Of Southern Italy And Sicily

The best ice cream in Italy