Just back from a fabulous road trip across Italy- this time from Rome to Salento – I feel like sharing some tips on how to survive when driving in Italy.

Seen through Scandinavian eyes, Italians drive in a slightly unorthodox way. But if you know their habits, they are not really dangerous. And in my opinion they are not nearly as aggressive as North European drivers. For instance, I have rarely seen Italian drivers use the middle finger or get into road rage, because of the rotten driving of others.

On the contrary, Italian drivers are reasonably magnanimous with a tolerance bordering apathy, when it comes to alternative ways of driving. Their use of the horn seldom signal annoyance or danger. Instead, the horn as a warning in hairpin turns, where the use of horn can be compulsory. When waiting at a traffic light as a favour to the first car in row, who may not have seen the light change from red to green. Or when they are greeting friends or celebrating important events like a football victory. Hoots are rarely hostile, and they are never used as a lesson to others who may have made a wrong turn. Italians in general leave policing to the police. 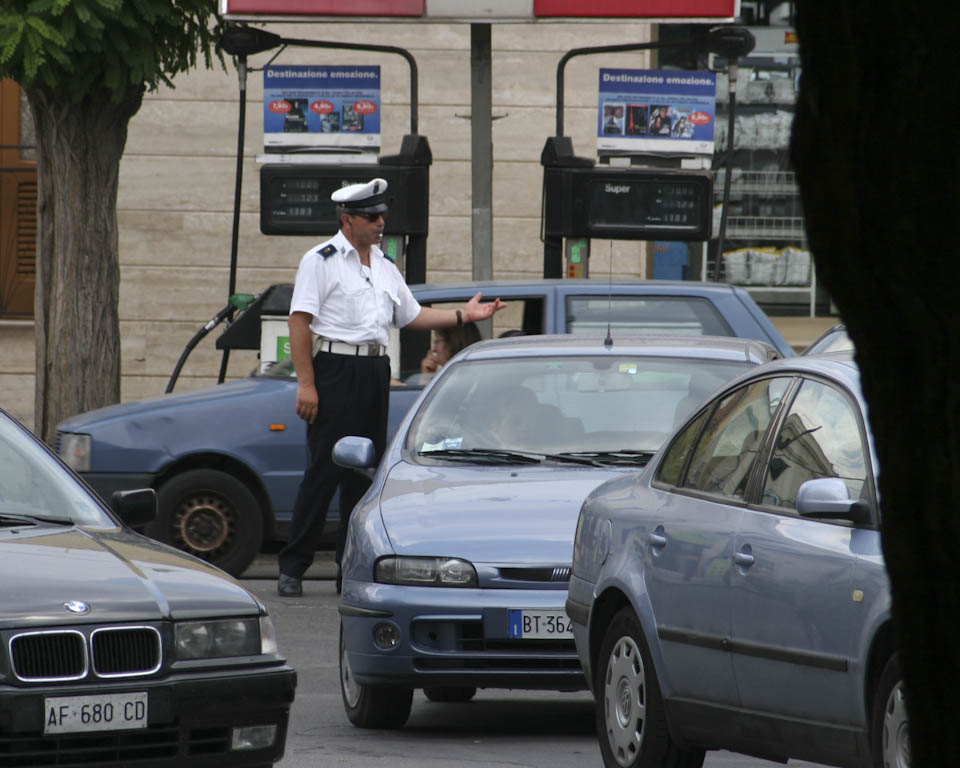 A local police officer directing the traffic in Francavilla Fontana

One of the first things you notice, when you get behind the wheel in Italy, is the other drivers’ tendency to keep close. Italians have a social disposition. They like to lie close to each other on the beach, big families live together in small apartments, they go on holiday in large groups, and they feel no particular need to keep their distance when driving. If there is free space, there is room for another vehicle, regardless of the need for safety margins and braking distances. This always leaves me breathless for the first couple of hours after entering Italy, but you get used to it by and by.

The bumper to bumper urge also manifests itself in a nasty habit of switching lanes without using signal lights, rearview mirror or sideway glances. In Italy people focus on what lies ahead, so if you see a car that might have an interest in making a sudden maneuver in front of you, you might as well keep your foot on the brake or warn him with the horn or the light before it is too late. Similarly, you don’t have to worry too much about what is behind you, for they are probably already busy trying to read your mind. 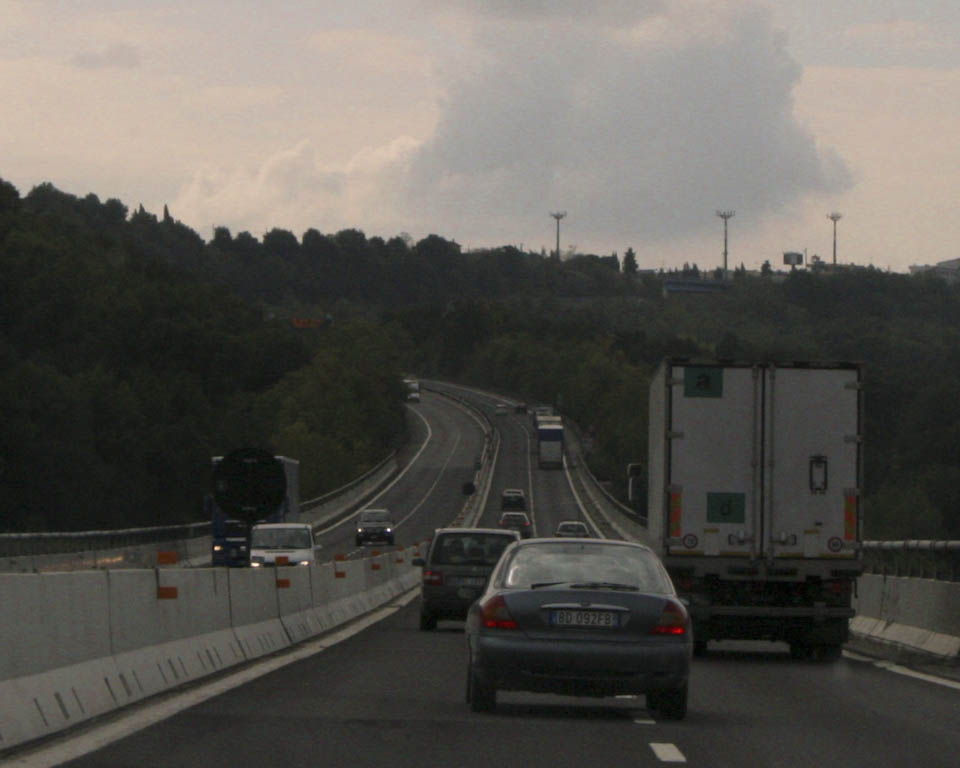 The motorway between Bari and Napoli

The advantage a forward looking traffic culture is that it is easy to make way. The zipper rule is used relentlessly, and as long as you take turns, other drivers are almost always willing to let you in. It is an effective form of organised chaos. As long as you remember to show some initiative. No one will pause to wave you forward from a by-road, unless push a little. After all, you might just want to stay there, which also explains, why drivers from behind will make an island of a slow driver and try to pass from both sides.

Mind reading does not work in all situations, when driving in Italy. Sometimes cars change speed or slow down for no apparent reason. Mostly this is due to multitasking, when the driver is texting a message or making a phone call. This kind of behavior is virtually impossible to predict, yet there are signs. This summer I was shocked to see cars blocking the brakes, whenever they encountered a sign saying ‘Controllo elettronico della velocita’. These warnings have been there for years without anybody paying attention, but now they are quite often followed by a police officer with a speed camera or a baby blue box that may or may not contain the same equipment. This can really clog up motorway traffic. 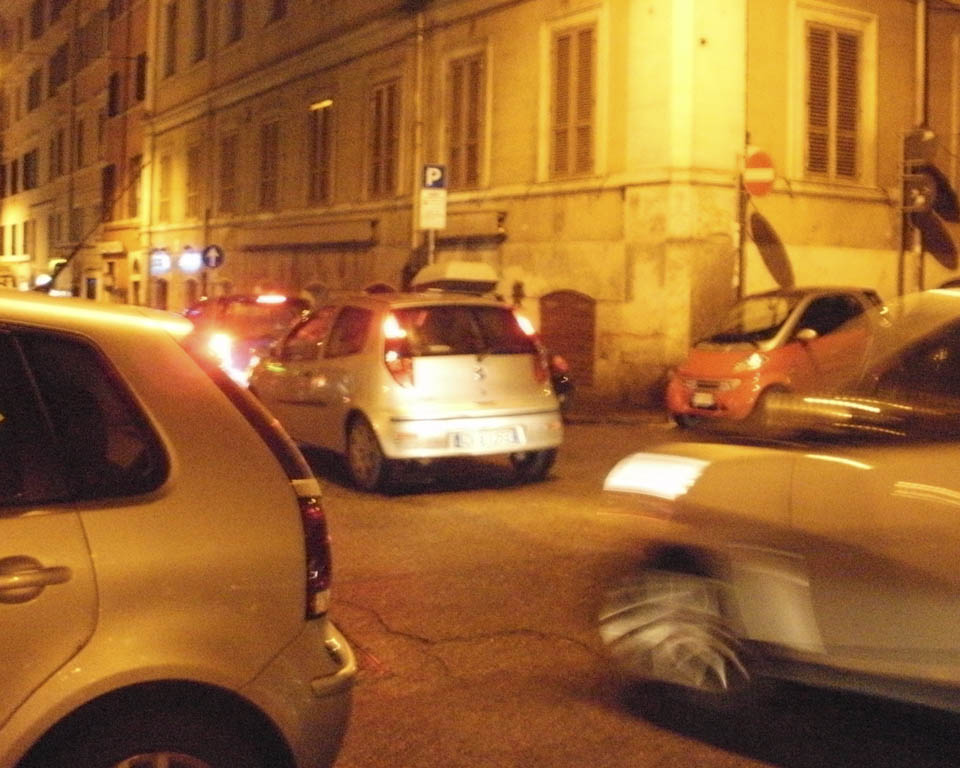 Other showstoppers include ‘swarming bees and killer-Pandas’’. Slow vehicles as the Piaggio Ape work bee that is incredibly popular in Southern Italy and the small Fiat Panda with a maximum speed of 100 km/h, if it is going downhill with the wind. These vehicles can sometimes be seen on the autostrada, where there is a minimum speed of 50 km/h in the middle lane and 70 km/h in the fast lane. In the right hand lane there is basically ‘free’ slow speed.

No self-respecting Italian will, however, be seen in the inner lane among trucks and lorries. Teeny weeny city cars are crawling along in the middle lane forcing other cars into the fast lane, where there is a risk of getting run down by a 200 km/h BMW.

Still the BMW knows he must pay attention to all traffic in front of him, so he or she does not do anything hazardous, even though he flashes his lights hysterically.

With these guidelines we get by, and the only time I find driving in Italy really uncomfortable is Sunday afternoon after the traditional family dinners, when you know a lot of the other drivers have enjoyed their wine and ‘amaro’. For Italians the drinking and driving ‘ubriachi’ is always someone else, and I have never seen them refrain from driving just because they have had a couple of glasses of wine.

For a current status of motorway traffic in Italy check the Autostrade homepage. There are webcams, weather forecasts and route planner, as well as an – for Italian web-sites – excellent version in English.

More tips on driving in Italy

Reggio Calabria to Taranto: Scenes from a road movie