We have visited Matera in Basilicata several times over the years. Spent hours panting up and down steep stairways and narrow alleys in the Sassi area looking for beehive dwellings that were first dug out with simple stone tools some time during the Paleolithic Era more than 12.000 years ago. A mistake that cannot alone be blamed on ‘The Passion of Christ’ and the knowledge that it was filmed on location in Matera due to it being the oldest inhabited city in the world. 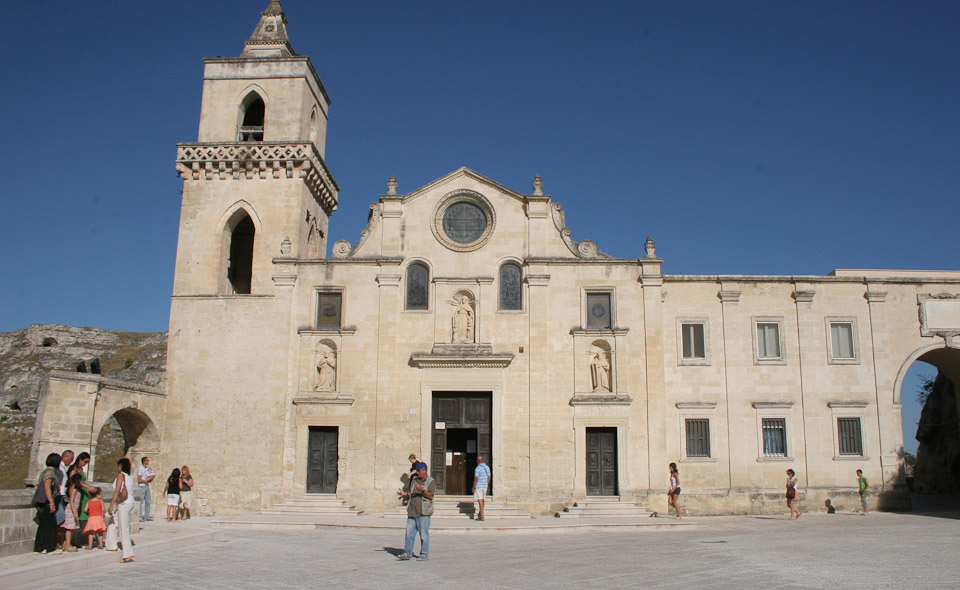 If you have not got time to ramble around the countryside looking for one of the 150 odd cave churches near Matera make sure to visit the chapels under San Pietro Caveoso.

What we failed to realise the first couple of times around was that there is not much Stone Age about the Sassi. People did not dig out their one-room homes in this area until the 19th and 20th centuries, when overpopulation and undernourishment turned the Sassi into slum. Seeing the poverty and measly living conditions from a time when our grandparents were children is one reason to visit Matera.

Across the canyon from the Sassi you can see some of the caves at may have been home to Mr. and Mrs. Flintstone.

Caves across the canyon

But there is literally a canyon between the cave dwellings of our immediate ancestors and the first stationary homes of a tribe of hunter-gatherers. Their homes can be seen from a distance, and that is a second reason to visit Matera. Just remember you have to be very persistent and find a good guide with impeccable rock climbing skills and strong local knowledge to visit the Paleolithic caves in person. And even then I’m not sure there would be more to see than eerie darkness filled with goat shit, weeds and sleeping bats.

The third World Heritage reason to visit Matera is the more than 160 rupestrian churches found in the area. And again don’t expect an Italian version of Turkey’s Cappadocia. Most of the cave churches near Matera are only a few hundred years old. They are modest and smallish and were excavated and used as a point of worship for farm workers living in the country side. As such there is a rock-hewn church for almost every masseria thoughout Puglia and eastern Basilicata and they were in use until quite recently. 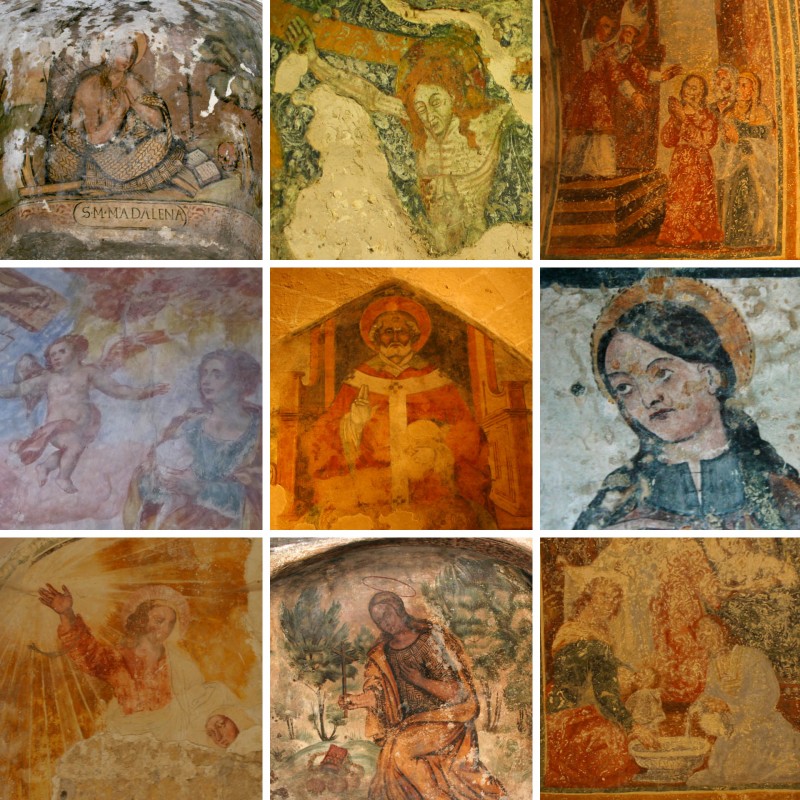 Frescoes in the cave churches near Matera are a treat. These samples are from various churches in the area. The fresco on top of the post is a beautiful Madonna found in a rupestrian church in Jesce between Matera and Altamura.

These cave churches are great fun to find and explore. You can come across them in the most unlikely places. And quite often they will be decorated with vibrant, colourful frescoes. Most of these frescoes are in a sorry state, but that makes them all the more fascinating.

If you have not got time to ramble around the countryside for days looking for secret entranceways to holy subterranean caverns, you can still get an impression of the rupestrian churches by visiting the chapels beneath San Pietro Caveoso and other Sassi churches. Here you’ll find stories and frescoes too good to miss.

Other unmissable sights near the cave churches and Matera