If you have heard about ghost towns in Italy you have probably heard about Craco. And chances are you have seen it too, as the abandoned town has become one of the most popular filming locations for historic movies.


Craco is only 40 kilometres inland from the Gulf of Taranto, and therefore quite close to our place, but it’s a slow drive and for some reason we had never been there. Wanting to put things right, we went over to explore this part of the Matera province this summer and were immediately gripped by the rugged landscape. There is a surreal atmosphere in this part of Basilicata strengthened vast open stretches of calanchi with no signs of vegetation, people or habitation.

Even from a distance you can see that Craco is a ghost town.

Going through Craco Pechiera my premonitions increased. The rows of detached, house barracks looked sadly out of place in this part of Italy with their square lawns and straight parallel and perpendicular streets. And again there were no people around. No women sitting outside on their front steps shelling beans or scrubbing the pavement. No men on their way to fetch water. And no children kicking balls and riding bicycles. The modern town was unnaturally quiet.

Regrettably, we didn’t stop, but followed the signs that said Craco was 8 km (and 15 hairpins) up a cracked and potholed road. We met only two other cars going down, but halfway up the hill the ghost town appeared in the distance. Craco was built on the summit of a steep 400 m cliff giving it the striking appearance of buildings that have become one with the mountain.

Guided tours
A few other tourist were parked at the top, but the town itself was locked behind a fence, and seeing the way the walls crumbled and fell apart you didn’t want to go in there without a guide. It looked as if most visitors were satisfied with a few snapshots and a quick thrill, before they turned around and went back down.

On the other side of town, however, there was a media centre, and when we ventured inside we met both a receptionist and a researcher.

– You can have a guided tour of the town, if you like. It costs 10 Euro per person, but you have to wait until there’s a group of 5-7 people, the researcher explained in Italian.

That sounded okay, so we registered and were shown into an AV-room, where the researcher sat down to introduce us to the history of Craco, while we waited for the guide- and more tourists – to arrive. Afterwards we were shown a medley of all the movies filmed on location in Craco. There was Mel Gibson, Richard Gere and Tom Conti running around among the ruins in ‘The Passion of the Christ’, ‘King David’ and ‘Saving Grace’ and other scenes from ‘Quantum of Solace’, ‘Christ Stopped at Eboli’ and the weird ‘The Sun Also Shines at Night’ by Paolo and Vittorio Taviani.

After about an hour our guide Vincenzo appeared and we managed persuade a Belgian couple to form the rest of the group, so the tour could start. 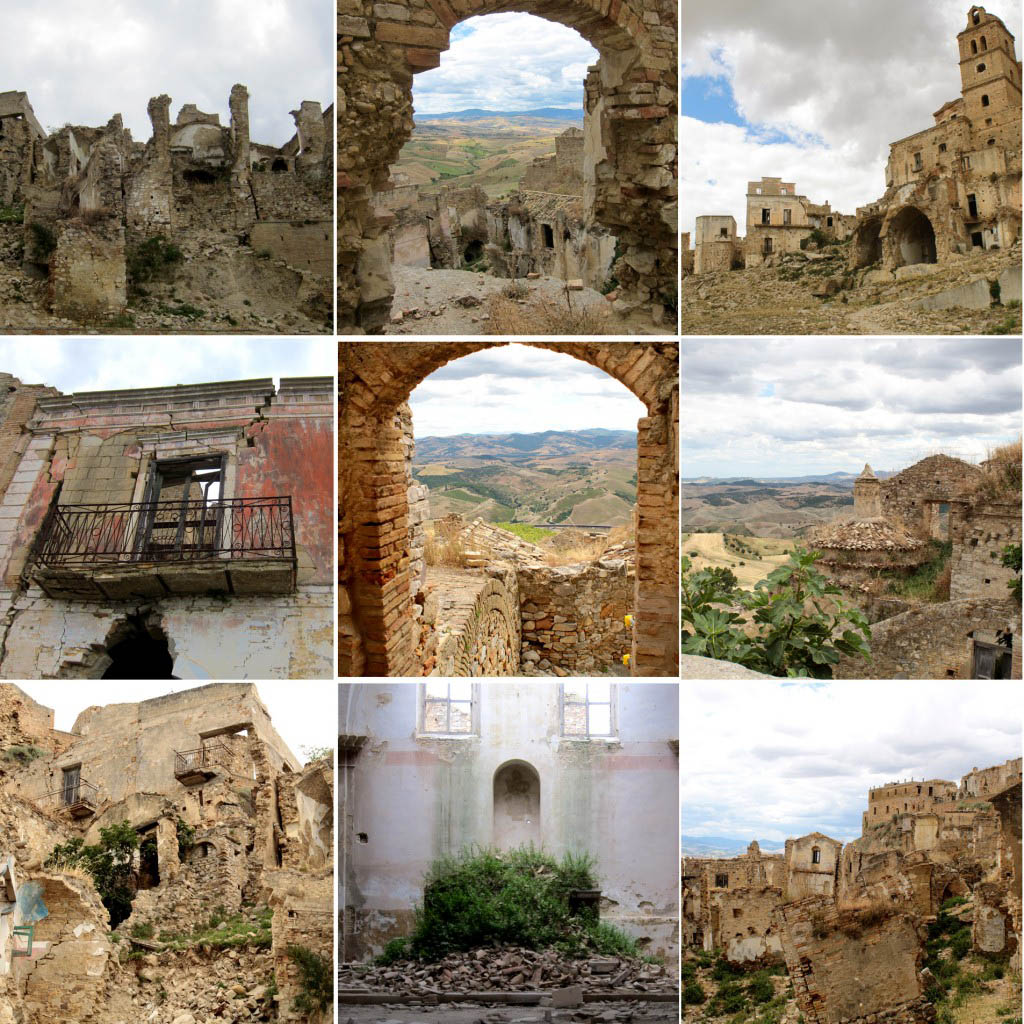 Views from our walk around the crumbling ghost town.

Vincenzo was about 30, and he was born in the old town and had played in many of the houses that were sliding down the mountain. This – along with the melancholia often encountered in people from Basilicata – made the experience rather sad.

Vincenzo explained how the landslides mostly came at night in December and January, where people would wake up after a heavy rain and see that their kitchen or living room was lying crumbled down the mountain. The first houses were evacuated in 1963, but people stayed on until the 1980s, when the continuing landslides, erosion and an earthquake rendered the old town uninhabitable.

Vincenzo pointed out the bakery with the best cakes. Fascist marks in a road grate. The market square where vendors announced their products in a megaphone, so housewives could send one of the children down to fetch shopping for the whole town. An abandoned stove. And the fallen church bell that was still visible through one of the lower windows in the church tower. We walked through goat shit to the palaces where the local aristocracy lived at the time, when Craco was still known as the golden mountain. Peeped into the church where the altar was overgrown by weeds. And ended up in the Norman castle tower that was used as a prison under Frederick II in the 13th century.

The sad irony of the place

And that’s the sad irony of the place, for the oldest building in Craco is also the most intact. But as two clergymen who had recently visited Craco pointed out, it was written in the Bible, that houses should be built on rocks and not on sand. I’m not sure I agreed with the implications of this observation, but the universal truth of the axiom cannot be ignored.

And the 3.000 people who lived in Craco until the landslides began have certainly paid the price for the heedlessness of their ancestors. According to Vicenzo the houses in the phantasmagoric town are still owned by private families, who have received no kind of compensation or help from the state to finance a new start on solid ground in eg. Peschiera.

Other places to visit near Craco: A ghost town in Italy

The Sassi district in Matera 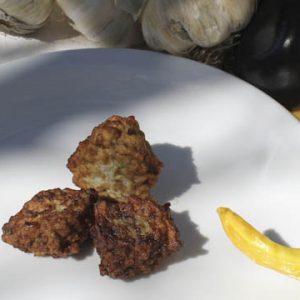 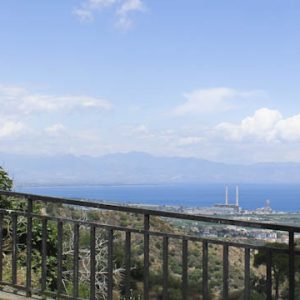 A guided tour of Rossano
Scroll to top