At least 4 000 dinosaur footprints have been found in a quarry in Puglia. But when we went to look for dinosaur tracks near Altamura there wasn’t a lot to see.

This week the British newspaper The Telegraph brought an article describing an amazing archaeological discovery in the Roman Vagnari Estate near Gravina in Puglia. Archaeologists have been excavating a cemetery from the 1st century, and they have found 72 skeleton among which were that of a man, who according to DNA tests derives from East Asia. The discovery is extraordinary, because it indicates that the Roman Empire was far more extensive than previously thought.

So far history books have maintained that Romans traded silk and spices through intermediaries along the Silk Route, but no Asians were believed to have travelled in the other direction. Judging from his burial place and the grave goods, the man with the old Asian bones was a slave or a labourer of humble standing, but he is nevertheless an example of a hitherto unknown migration, which makes it interesting to identify his exact place of origin. Perhaps the Vagnari cemetery will revise history. 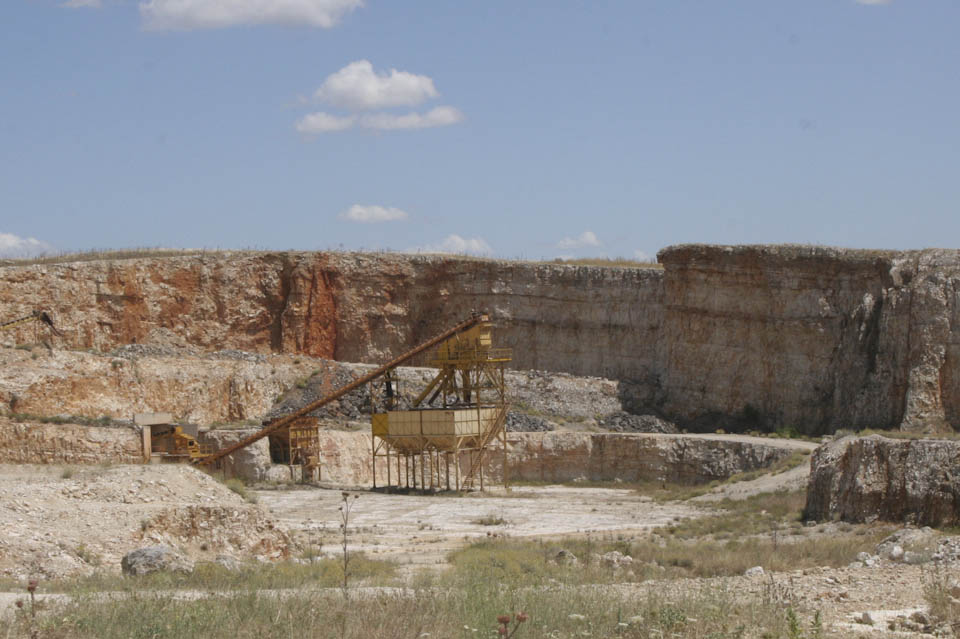 Outing to Jurassic Park
The story reminds me of an excursion we made to the murge around Gravina and Altamura a couple of years ago. I had read in a similar article that at least 4 000 dinosaur footprints ranging from 5-45 cm in size had been found in the De Lucia quarry, and I thought it would be interesting to see, what genuine 70 000 year old dino marks looked like.

Unfortunately, the footprints proved really hard to find, although the quarry is placed in an wide open landscape with rolling wheat fields stretching into infinity. We ended up in Altamura, where two old men hiding from the midday sun in the Pro Loco told us to go back the way we had come and stop around a point in nowhere called Casal Sabini, where there was supposed to be a quarry.

The quarry was of course fenced off and closed to the public, but a hole in the fence and not a soul in sight for miles around dared us to enter, and after walking around the gravel and limestone excavations for some time, we did find some cracks and hollows that might – with a bit of imagination, goodwill and the hurry of trespassers – be dinosaur footprints. Whether from the long-necked herbivorous Sauropods, horned Ceratopsids, Iguanodonts and Achilosaurs, or the carnivorous species Teropods, I could not tell, and there were no signs of the promised folds of animal skin, either.

Still, the closed down quarry was definitely an interesting experience. And maybe one day the site will be turned into a major tourist attraction as Jurassic park and fairground with explanatory notes pointing out the best preserved tracks. So far it has been listed on Unesco’s tentative World Heritage List

The very old Altamura Man
In the meantime we might take the old men at the Pro Loco’s advice and go back to see the Altamura Man (and one of the first Asian immigrants in Europe, if that becomes possible).

In 1993 a group of spelaeologists found the extremely well preserved remains of a Homo heidelbergensis in a karstic pulo called the Lamalunga cave. According to Unesco, the Altamura Man is 130 000 years old, but Wikipedia says he may date 400 000 years back, so it is safe to say his exact age is attached with some uncertainty. This, however,  does not make the sight less interesting. As the old men in the Pro Loco said:

– The Altamura Man is a lot older than the dinosaur tracks and much more interesting for tourists to look at, because you have to go down to a cave at the bottom of the gravina, where there are heaps of skeletal bones from many different animals. It is a sight not to be missed, but … you won’t make it before afternoon closing time, so you have to wait five hours till they reopen.

Other sights than dinosaur tracks near Altamura