the Gothic Cathedral of Milan

Novelists have described the gothic cathedral of Milan as “a curious marble mountain” and a “glorious structure in all its majesty and beauty”.

I am positively addicted to famous sayings and enjoy collecting quotes about Rome and quotes about Venice. In consequence, I’m always on the lookout for second-hand books on Italy, and yesterday I came across H.V. Morton’s A Traveller In Italy

from 1964. On this trip, Morton starts out in Milano, where he observes that people can walk and talk simultaneously unlike the Romans who block the pavement every time they utter a word.

He also provides this description of Milano’s – in my opinion – slightly overdone and overwhelming Duomo, the construction of which stretched over 579 years from 1386 to the completion in 1965.

“The crowds circulated in front of brilliantly lit shops in a piazza in the centre of which stands the largest cathedral in existence after S. Peter’s in Rome. This trans-Alpine mastodon is a curiosity. It was begun in the late Middle Ages when Gothic architecture was in vogue and it was continued for centuries after it became unfashionable, but having been committed to such a vast construction, the builders were obliged to continue building in generation after generation in a spirit of conscious archaism. Naturally they overdid it. Whenever they were in doubt, a few saints were added to the building. Their numbers confounded even Baedecker, who says there are ‘upwards’ of two thousand statues in marble. Slender pinnacles rise everywhere, each one holding a saint. This pious encrustation culminates in a floodlit, golden Madonna – Milan’s beloved Madonnina – who, when I first saw her, stood high against the dark sky gazing into the piazza far below, where Victor Emmanuel II rode a bronze charger.” 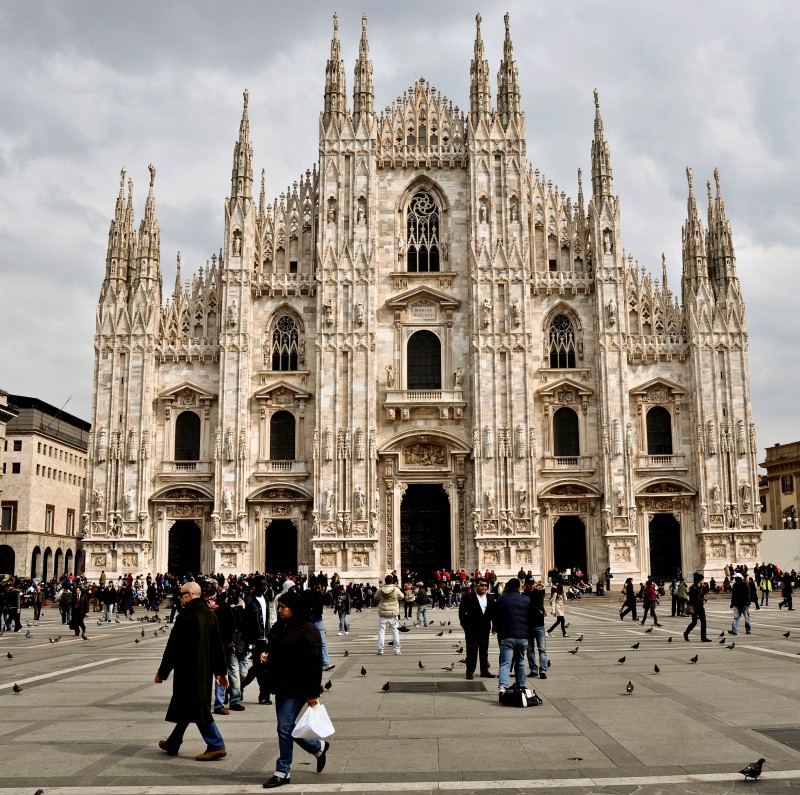 Hans Christian Andersen was more impressed. He visited the cathedral around 1833 and recorded his impressions in The Improvisatore

“I went daily to the cathedral of Milan, that singular mountain which was torn out of the rocks of Carrara. I saw the church for the first time in the clear moonlight; dazzlingly white stood the upper part of it in the infinitely blue ether. Round about, wherever I looked, from every corner, upon every little tower with which the building was, as it were, overlaid, projected marble figures. Its interior dazzled me more than St. Peter’s Church; the strange gloom, the light which streamed through the painted windows – the wonderful mystical world which revealed itself here – yes, it was a church of God!”

The Glorious Structure in All Its Majesty and Beauty

While Charles Dickens’ view of the church ten years later was obstructed by fog. In Pictures from Italy

“The fog was so dense here, that the spire of the far-famed Cathedral might as well have been at Bombay, for anything that could be seen of it at the time. But as we halted to refresh, for a few days then, and returned to Milan again next summer, I had ample opportunities of seeing the glorious structure in all its majesty and beauty.”

I guess, the gothic cathedral of Milan is just one of those sights we all have to see and judge for ourselves.

Notes near to the gothic cathedral of Milan