Faenza ceramics have been produced since the mid-1500s and in many languages the city’s name has become synonymous with pottery.

– Welcome to the world famous Faenza. I suppose you are going to see the Faenza ceramics museum first thing tomorrow. It is said to have one of the world’s largest and finest collections. As a matter of fact the city has made pottery since the mid-1500s and in many languages the city’s name has become synonymous with ceramics. Think about it: What’s pottery called in your language? a very enthusiastic man with big expectant eyes asked.

If you have visited Faenza before, you know the answer, and besides I did not have the heart to ruin his fun by answering ‘earthenware’ or ‘majolica’. Still, I honestly do not know what the word ‘faience’ means, and like the other times we have stopped over in Faenza, we did not stay long enough to visit the museum and perhaps find an explanation.

Faenza has the disadvantage of a truly foul smell. You notice it from a distance, when you drive along the autostrada with the air conditioner switched on, the stench is incredible and it is impossible to decide whether it comes from hemp fields, agriculture, industry or the large factories producing ceramic tiles. You suddenly understand why some people talk about The Poo Valley.

Fortunately for the city’s 55,000 residents, the smell does not seem quite as bad in the centre, but you can find threads discussing boundary values and methods to measure the discomfort on the Internet, so the problem is real.

It was not the scent that made us leave town after one night only, but a feeling of not being able to find a way in. Allegedly, Faenza’s central square should be bordered with arcades and really nice buildings, but we walked around a residential area for hours, and although we asked directions several times, we never managed to hit bulls eye. After crossing an artful junction with several over- and underpasses, we ended up in a park lined with winos, and instead of a good restaurant, there was a primitive pizza place selling beers in paper bags as a sideline. On previous visits we have been unable to find a hotel in the town, although I am sure it must be there some place. Sometimes it is just difficult to be a tourist travelling on your own.

This time we had found a great Bed & Breakfast in the outskirts, but due to the apparent lack of attractions, we decided to drive on early the next morning. I know from experience that no Italian city is totally ugly, smelly and boring, so maybe it’s time to pay Faenza another visit?

Other sights apart from Faenza ceramics 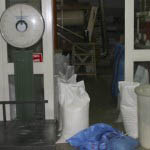 Famous Words about the Gothic Cathedral of Milan
Scroll to top