The Trials and Tribulations of

If towns had a personality, Teramo in Abruzzo would be the shy, introverted type with a streak of melancholia. But its an interesting acquaintance all the same.

Teramo in Abruzzo is a fair-sized town backed by the highest mountains of the Appennines and surrounded by two rivers. It is located 40 km south of Ascoli Piceno but regardless of the proximity the two towns are distinctly different. If this area of Abruzzo and Marche were a pop group, you might identify Teramo with George Harrison, while Ascoli is John, Paul AND Ringo.

In Teramo you can sit in a café for hours without buying anything.

We must have visited Teramo in Abruzzo 4 or 5 times over the past 20 years and each visit has left me with an elusive feeling. Maybe it’s the towering snow-clad mountains at the end of the streets that affect the microclimate and make it alternate between chill winds and stifling heat; maybe it’s the shops that hide their gaze behind half drawn steel shutters, as if they are just about to close; or the indifference of waiters that will let you sit at their marbled plastic tables or use the bathroom without meeting your eye or asking for orders. Teramo is not an easy acquaintance. There’s something private and impenetrable about the town that still hides behind massive medieval walls.

For years there was – and maybe still is – an old-fashioned photo booth beneath the arcades in Piazza Martiri della Liberta in Teramo, where skinny 6-year-old girls could be transformed to giant American football players with helmet, visor, shoulder pads and breast plates. You walked away with pictures of Amazons about to ride a charge, as Henry James wrote in an entirely different context in Lady Barberina, and looking into the history of Teramo it’s easy to understand people’s need for keeping part of themselves under armour. 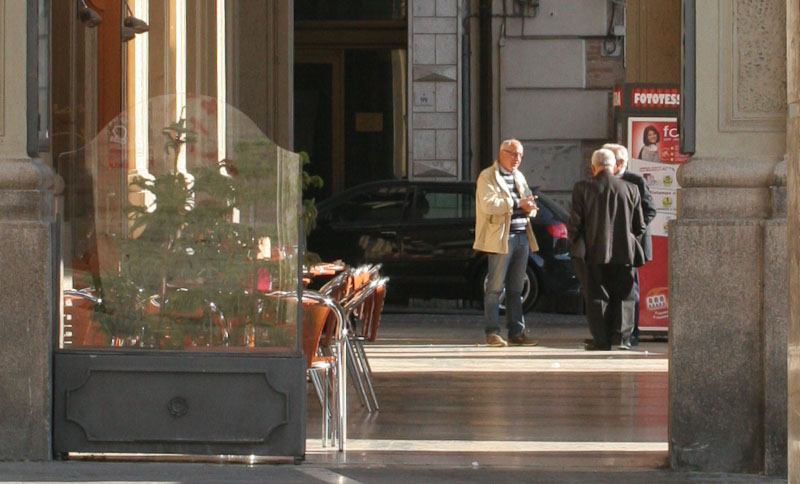 The Tombstone of the Evil Tongue

Like most other cities in this part of Italy, Teramo can trace it’s origin back to the Pre Roman Age, and as Mr. Dickens pointed out in Martin Chuzzlewit there’s a murderer and a vagabond in all old families, and the more extended the ancestry, the greater the amount of violence and vagabondism; “for in ancient days, those two amusements, combining a wholesome excitement with a promising means of repairing shattered fortunes, were at once the ennobling pursuit and the healthful recreation of the Quality of the land.” So like the Chuzzlewits, Teramo has been actively connected with divers slaughterous conspiracies and bloody frays. 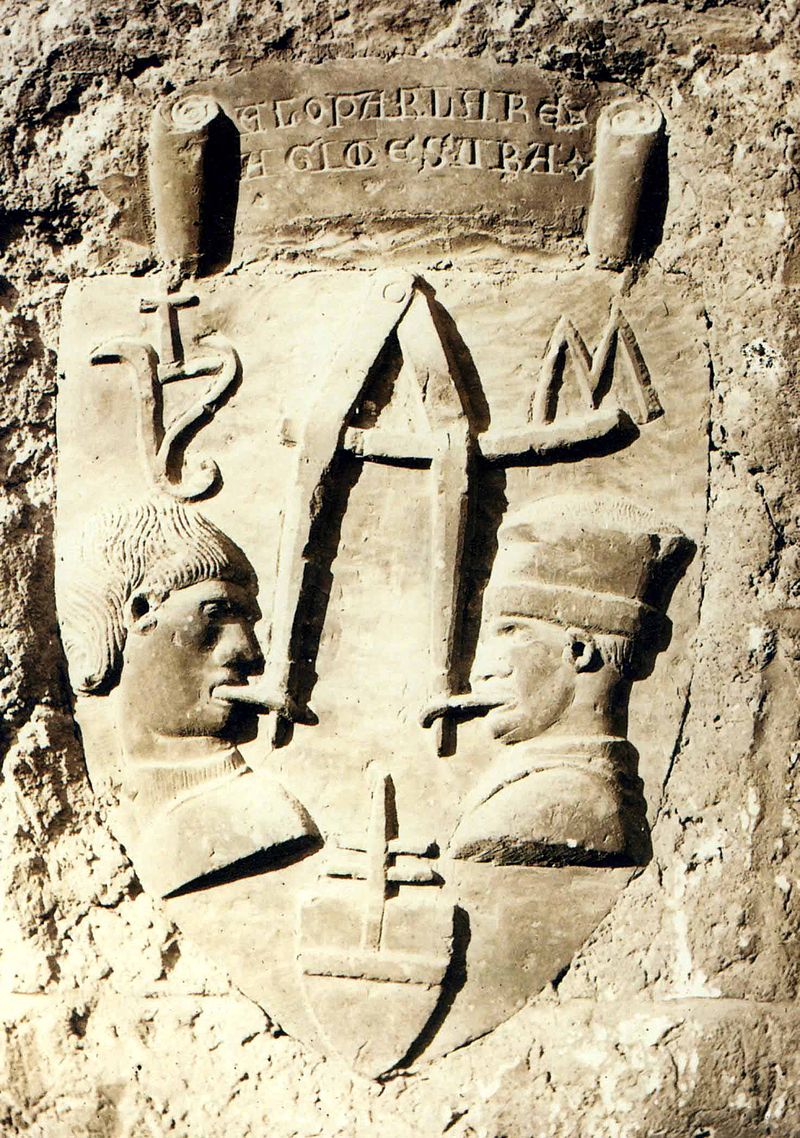 The tombstone of the evil tongue can be seen in the town hall.

Particularly in the 14th and 15th century, when the families De Valle and Melatino were locked in a bloody feud. The two fractions were murdering and massacring and backstabbing each other and any citizen who dared support this side or that, until the Duke of Atri, who had been appointed lord of the town, decided to teach the warring tribes a lesson.

The Duke of Atri invited the heads of the two rivaling families to his palace, where they were locked up for the night in separate wings and told they would see the reason for the invitation on their way home. When they drove up to Teramo the next morning 13 members of the Melantino family had been hanged from trees lining the road.

After that the Melatino laid down arms, and they were given the derogatory name Spennati meaning ‘plucked’. The De Valle household had a plaque chiselled into their facade with the inscription “A lo parlare agi mesura” or ‘talk should be measured’. The plaque shows two men whose tongues have been pierced by a compass, and it is known as the ‘tombstone of the evil tongue’.

Perpetual Surprise on the Face of the Cathedral

Neither the hangings nor the appeal to speak kindly could put an end to Teramo’s trials and tribulations. Over the last 500 years, city has repeatedly been struck by earthquakes, devastated by plague and suffered a succession of foreign invasions and poverty. No wonder the round-eyed and saint-nosed Cathedral that has witnessed most of the atrocities wears an expression of perpetual surprise mixed with fear. You can almost hear the rose window mouth exclaim a heartfelt “oh no” at the prospect of yet another calamity. 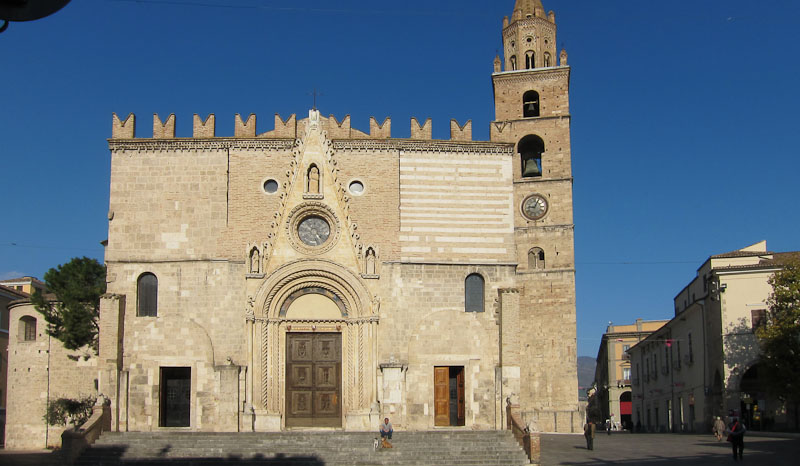 The astonished face of the cathedral.

Along with some roman ruins and a medieval castle, the cathedral is one of the oldest remaining buildings in Teramo, and although it looks like a patchwork of different architectural styles from the outside, it holds the treasure of a silver antependium and the relics of Saint Berardo, who performed the miracle of making peace among the warring fractions in Teramo for a period of 7 years beginning in 1116.

The Irony of Immortality

A little knowledge of the local history is useful, when setting out to explore Teramo. It makes it easier to appreciate the irony of immortality, as the losers in the Medieval feud have survived in several place names, while most traces of their opponents have vanished.

You still enter Teramo through Porto Malatini, the medieval Malatini palace was recently restored and there’s a Largo Malatini, where Corso Cerulli meets Corso De Michetti. On this corner you’ll also find a goofy looking griffin that combines opposing character traits – like the small girls in football armour coming out of the photo booth. 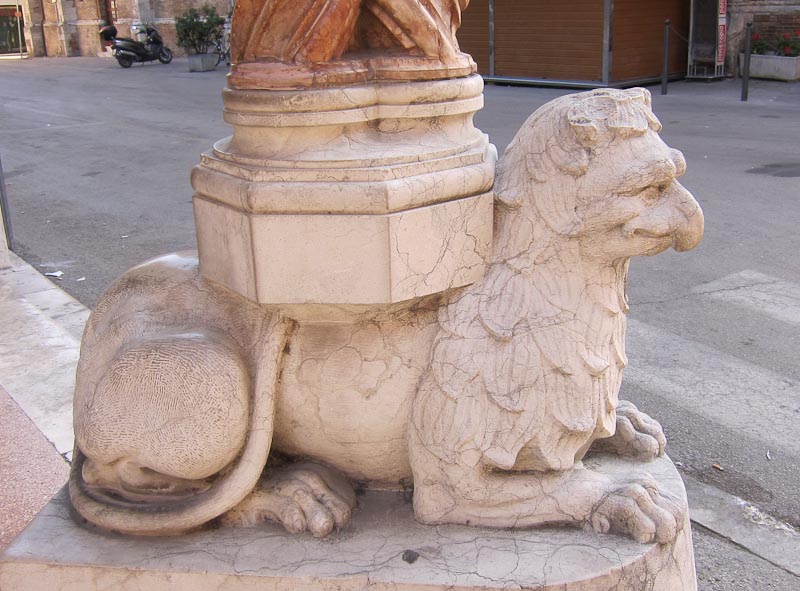 The half eagle half lion griffin that still guard the Malatini’s corner in Teramo.

The house of the De Valle family has crumbled, though someone rescued the tombstone of the evil tongue and brought it to the town hall. The only other trace left of the once powerful clan is an alley named Salita Mazzaclocchi off Corso Porta Romana as a reference to the De Valle nickname of someone who made clubs and maces.

Apart from these hints to a distant past there are neither murderers nor vagabonds in Teramo anymore. People are generally curious, talkative and friendly once they have certified that you don’t mean no harm. The town is rich on cultural events and architectural details, and the atmosphere is nice and peaceful bordering on boring.

Teramo may be the George Harrison of this particular part of Italy, but both the town and the musician have definitely got Something.