Perched on top of a hill 8 km from Sanremo in Liguria, Bussana Vecchia is a must-see for tourists seeking out the curious and weird wonders of Italy.


The history of Bussana Vecchia dates back to the 7th century, when the first stable settlements appeared. Due to its geographic position the area was easily defensible, and in the following centuries the settlement prospered and grew with the construction of a castle, a church and stone residences. It was all destroyed by a devastating earthquake on the morning of Ash Wednesday 1887, and hundreds of people lost their lives. After the earthquake, Bussana Vecchia was deemed uninhabitable, and it became a ghost town like Craco in Basilicata and Civita di Bagnoregio in Lazio.

After World War II migrants from southern Italy settled in Bussana Vecchia illegally, but they were evicted by the police, and to discourage further habitation the authorities ordered the destruction of all first-floor stairways and rooftops.

This did not deter the sicilian painter Vanni Giuffre, and in the early 1960s he established an international community of artists living and working within the village, not unlike Vincent City in Guaganano in Puglia. Despite the lack of sanitation, electricity and tap water and periodic confrontations with the authorities they managed to make some of the old buildings habitable, and today Bussana Vecchia has a total population of 66 people. They are mostly artists and craftsmen, who try to keep the free artistic spirit alive by living simply and cheaply without the constraints of modern society.

Yet it seems to me that commercialism is slowly catching up with the hippie ideals. Speculative craft shops peddle cheap souvenirs to the summer tourists, while artists in residence meet you with a hostile grunt, if you enter their – supposedly open – ateliers. We spent about an hour touring the old streets and stopping by the Chiesa di S. Egidio, which has never been restored, and can only be visited from the outside. The church is structurally unsafe, while the bell tower miraculously escaped the earthquake. 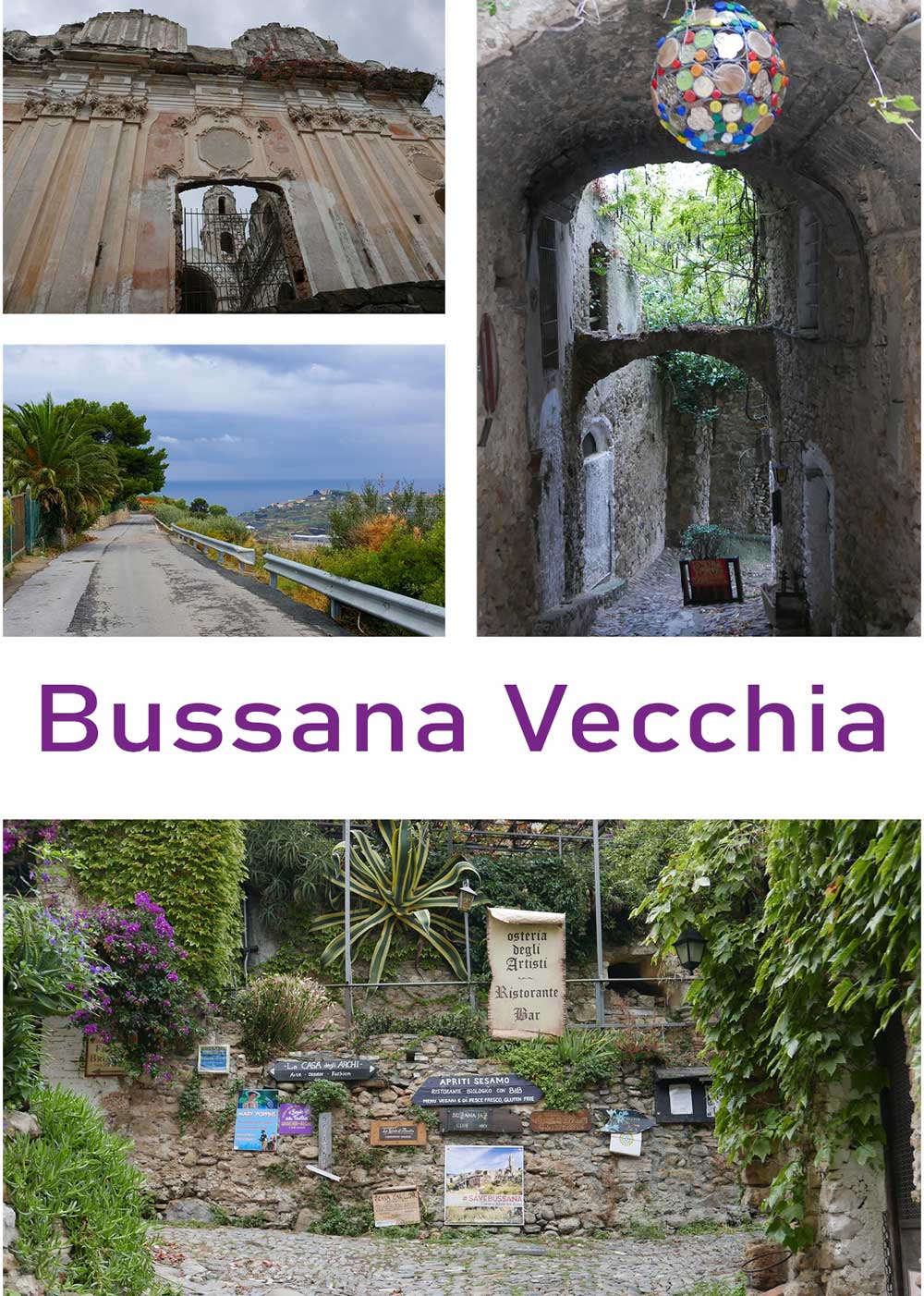 The sights of Bussana Vecchia include the church of S. Egidio with the miraculously intact belfry, magnificent views of the Ligurian coast and the workshops and ateliers of resident artists and craftsmen. Do not disturb signs indicate places where tourists are less welcome.

You need wheels to visit Bussana Vecchia. The distance from Bussana to the ancient hamlet is only 2 km, but it’s a steep incline and you would have to walk most of the way along a narrow, winding and derelict road, where two cars can hardly squeeze by.

It is also a good idea to check the weather forecast before you go. We went in the fall and while we were near the belfry on top of the village, rain came pelting down. By the time we got back in the car we were soaked through, and the already precarious road downhill had turned into a fast flowing river, making the journey down more memorable than good.