In Italian Civita di Bagnoregio is known as La città che muore (“The Dying Town”). But in recent years it has experienced a revival thanks to the influx of tourists. 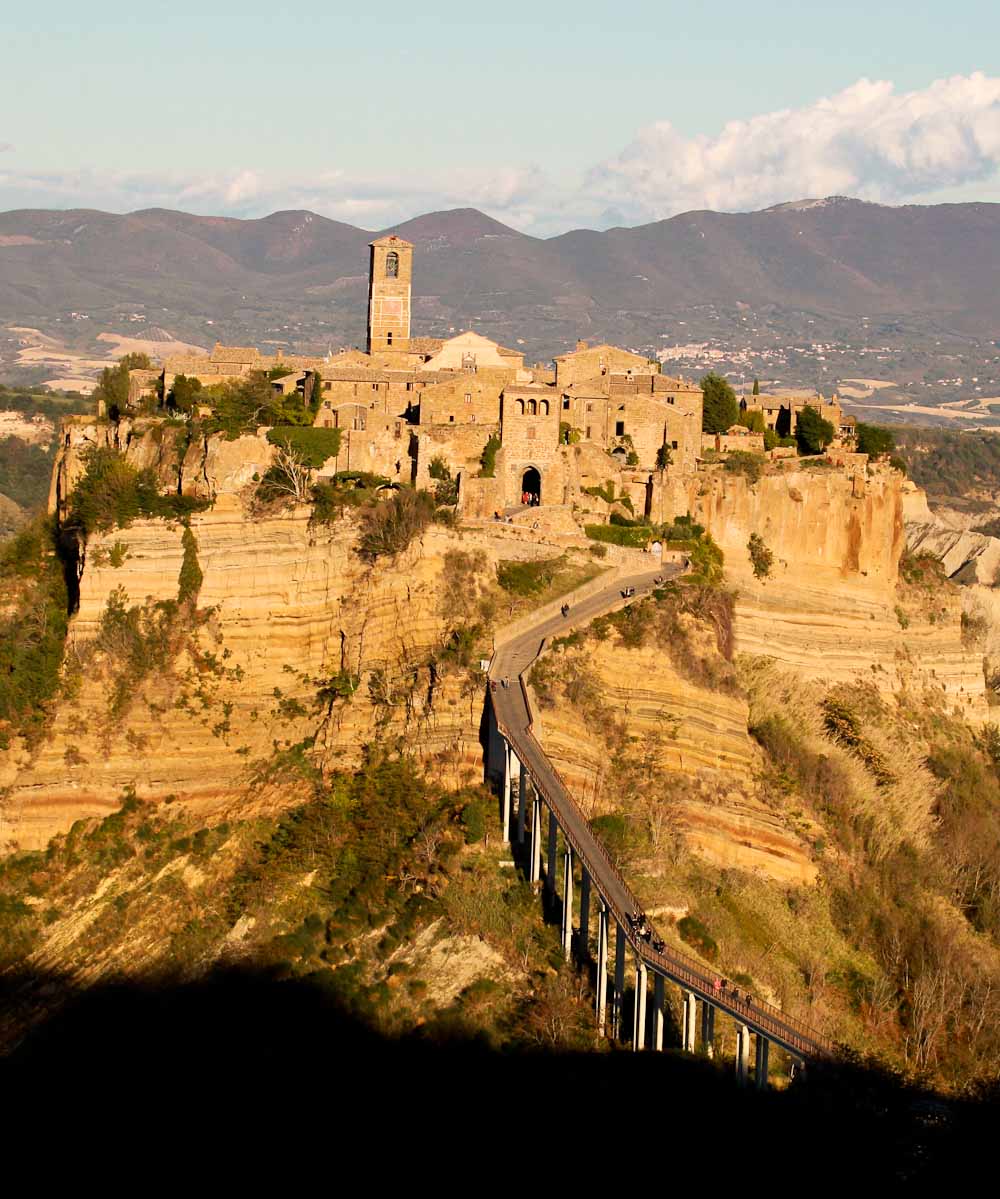 Civita di Bagnoregio outlined against the blue mountains of Umbria. A lot of the medieval town’s houses have been swallowed by landslides and earthquakes over the centuries, but a small nucleus remains.

Civita di Bagnoregio traces its origin back to the Etruscans, who inhabited northern Lazio and Tuscany before the Romans. They liked to build their settlements on steep hills surrounded by thick walls, and Civita was perfectly located near one of the main commercial routes of the time.

The ancient city of Civita had five gates and a tunnel called the “Bucaione” leading directly down to Valle dei Calanchi. Archaeologists have discovered a necropolis and several chambers carved in rock and dating back to Etruscan times. Even then Civita di Bagnoregio was threatened by earthquakes and erosion, and the Etruscan tried to protect the city against landslides by digging ditches and canals in order to direct the course of rain and rivers. 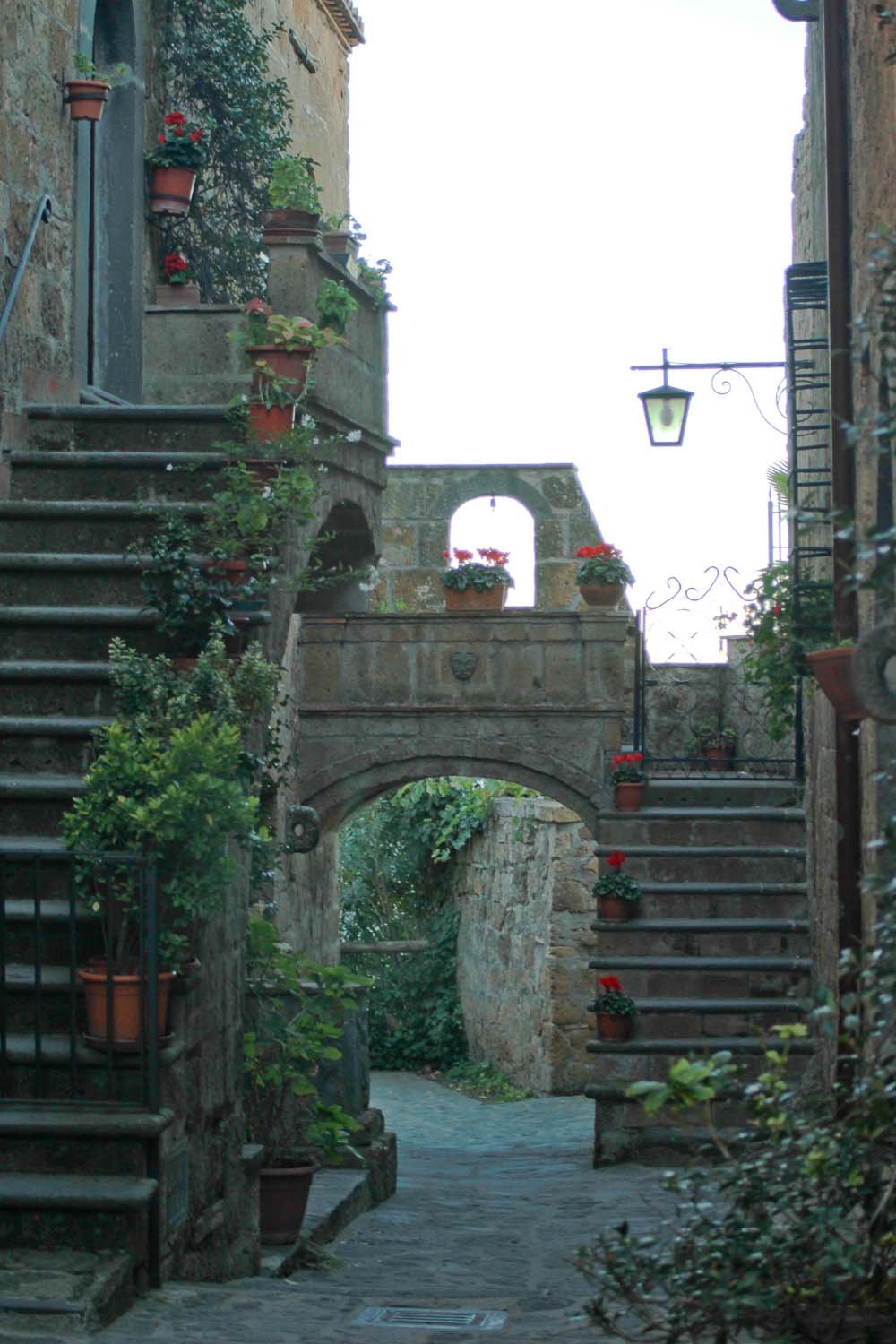 Civita di Bagnoregio is known as the birthplace of Saint Bonaventure (1221 – 1274), the “second founder” of the Franciscan order, and although his childhood home has crumbled, the town has retained much of its medieval hill town charm.

Town walls and most of the houses in the historic centre are made from natural stone with external staircases and flowered balconies. There are a couple of renaissance palaces near the Romanesque church of San Donato. In the church you can see a wooden crucifix, venerated for the miracle of talking in 1499, when it told a pious woman that her prayers had been heard and the plague harrying the town would soon end.

A Medieval feeling is also present in recurring annual events. The wooden cross is treated to a procession through Civita di Bagnoregio on Good Friday. There is a traditional donkey race scheduled for the first Sunday in June and the second Sunday in September, and at Christmas a living nativity scene is enacted in the town square. Planning a tour of Civita to coincide with these events would definitely spice up your visit. 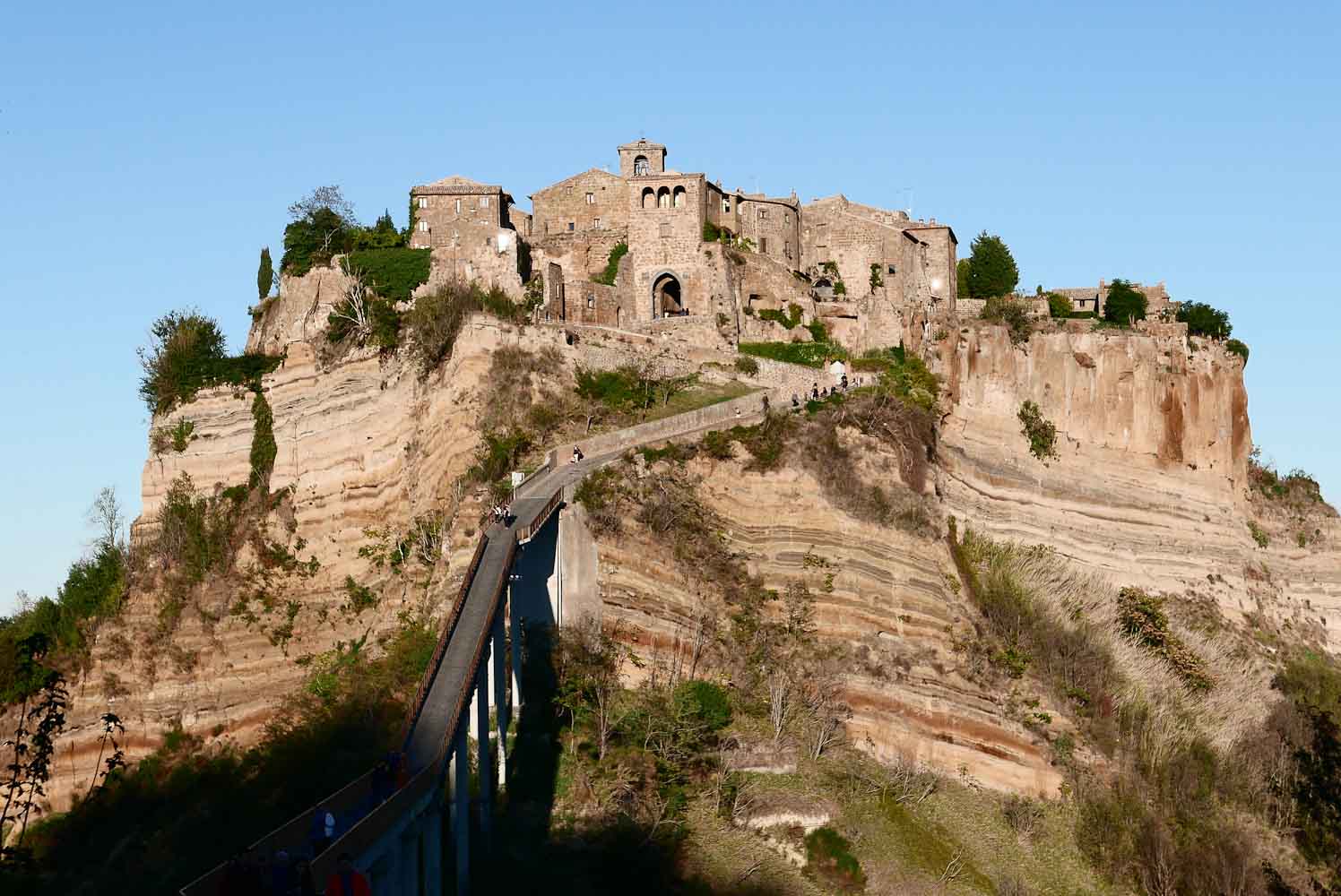 The thrill of visiting

Still, the most fascinating and vertigo inducing attraction in Civita di Bagnoregio is the pedestrian bridge and the phantasmagorical views of the ancient town floating above a sea of steep red cliffs and white gullies.

In 1944, a former bridge leading up to town was bombed by Germans and it was not replaced until 1965, when the present concrete footbridge was constructed. The 600 metre long bridge is only accessible to pedestrians, but the ten permanent inhabitants of Civita di Bagnoregio and the B&B owners, restaurateurs, street cleaners and dustmen are allowed to drive motorcycles or three-wheeled Api’s across with provisions.When they do, pedestrians squeeze up against the railings protecting them from a deep dive into the abyss.

The bridge is the lifeline that prevents Civita di Bagnoregio from dying. It is a seemingly fragile connection to the firm land and visitors, who like to get away from the hustle and bustle of big cities and spend an hour or a weekend in the complete silence of this ancient town that appears to be floating in the sky.

The Italian writer Bonaventura Tecchi (1896-1968), who was born in Civita di Bagnoregio, captured the magic, poetry and atmosphere of the place in several novels and essays like eg. “Antica Terra”. He wrote

I am sure he is right. Civita di Bagnoregio has applied for Unesco World Heritage status, and if it is granted, it will help to preserve a unique town for the future.

Access to the bridge and Civita di Bagnoregio costs 1,5-5 euro depending on the time of year.