Altamura and the meaning of claustrophobia

Take a walk around Altamura in Puglia behind the city walls and you will find a town closing in on itself. Then you will know more about Altamura and the meaning of claustrophobia.


We have been in Altamura between Bari in Puglia and Matera in Basilicata several times, but I would not have noticed one of the most unique features without the guidance of Tonio Creanza. He started a walk around Altamura by producing a street map and calling attention to the neat division of the inner walled city in four equal sized parts.

The two main roads going north-south and east-west divide the old town into sections that segregated the Muslims from the Jews from the Greeks and the Latins. Who belongs where should still be visible in the street names, though that particular detail is beyond me.

Stairs leading over the town walls. The central square where the two main roads cross. And an attempt to capture the cramped architecture.

The lacking will to mingle with other religious and ethnic group soon became a designing feature. With very thick, high and necessary city walls space was constricted, but to begin with all families had a house and a yard. The problems arose as the children in these families grew up and wanted to settle down and start their own family.

Then the family property was divided into ever decreasing lots and after a few generation space became so cramped, it was impossible to squeeze in another house. 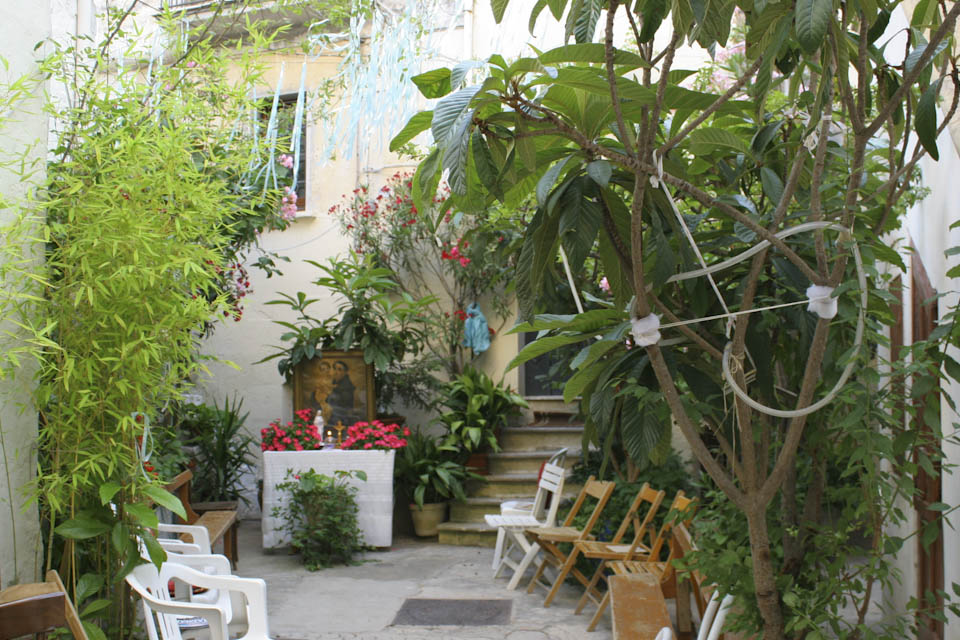 The remaining open square leading to the houses is called a ‘claustro’, and going there the reference to claustrophobia is self-explanatory. Some of the 80 odd claustri are not much bigger than a living room and filled with chairs and flowers and shouting and washing and outdoor shoes.

If it is a Greek claustro, there is a tree in the middle, while Muslim claustri are lost in a labyrinth of alleys. In places like this ‘love thy neighbour’ is an obligation. Yet people in the old Altamura did not stretch their definition of neighbours too far. All claustri have only one entrance making it easier to bar the way for enemies and defend the family property.

Other notes like Altamura and the meaning of claustrophobia

History and heritage around Altamura

Baked fish with tomatoes and gremolata
Scroll to top