Like many other south Italian cities, Bari in Puglia represents at least a two-in-one discovery with large areas strapped between the past and the present.

There is the commercial centre, Murattiano, which Napoleon’s brother-in-law Joachim Murat laid out with a ruler, and where the Mussolini era has left its mark with a series of sinister, pretentious buildings; and there’s Bari Vecchia – the small white historic town on a peninsula with more than 120 mysterious shrines, lively piazzas and old, erratic, get-lost alleyways that protect the inhabitants from the wind and the sun.

All time tourist favourites are the two Medieval castles, Romanesque churches and the holy relics, but the Puglian capital also stands out as a hot spot for shopping, music and being.

Sights
Castello Svevo, dating back to the 10th century and reconstructed by Frederick II 200 years later, is one of the first things you’ll notice when entering Bari from the north. Around 1220 the trapezoid defensive structure with moat and corner towers housed the Holy Roman Emperor’s court including Saracens, scientists, astrologers, hawks, leopards and the famous elephant. According to an inscription on a wall within the castle, this was where beggar monk San Francesco was severely tempted by a sensual young girl, whom he frightened off with a piece of burning coal. Today Medieval monks and knights in shining armour have been replaced by two old-age-pensioners selling tickets to the rather boring Gipsoteca within.

Fortino di Sant’Antonio Abate guards the eastern corner of Bari Vecchia against pirates from the sea. The building dates back to the 15th century and it was named after the saint of domestic animals, who has a chapel in the hallway that can only be visited on January 17th.

Cattedrale di San Sabino is one of 40 churches crammed into the relative small area of Bari Vecchia, and it is a prominent and admired example of the Romanesque style in Puglia. The unembellished, white exterior is simple and elegant and inside several tiers of columns, colonnades and galleries emphasize the solemn atmosphere. Remember to go downstairs to visit the crypt which contains the relic of San Sabino and a nice Madonna Odegitria icon.

Basilica di San Nicola is Bari’s main attraction. A massive church that contains the relics of San Nicola, better known as Father Christmas. The saint is celebrated with a big festival every year during the first weekend in May, when they tap manna – a liquid said to have miraculous powers – from his tomb.

The provincial gallery Pinacoteca Provinciale presents Italian baroque and impressionistic paintings especially by the local painter Francesco Netti. And in Museo Archelogico there is an impressive collection of red- and black-figure pottery from Attica. 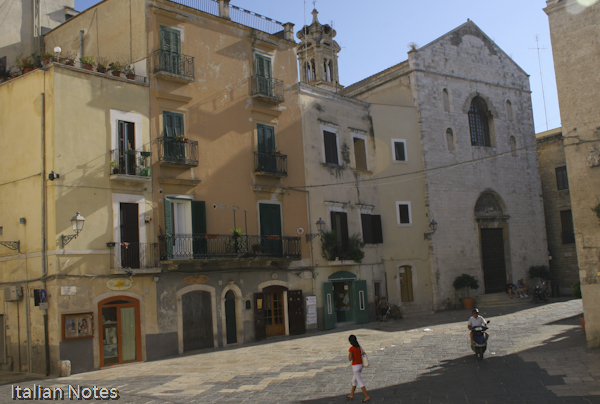 Places
Piazza del Ferrarese provides a lively entrance to the old town as market place in the morning and communal living room at night. Here you will find numerous cafés, bars, and gelateria in addition to excavated patches of via Appia-Traiana, the Sala Murat which holds minor exhibitions of contemporary art, the old indoor fish market, and occasional public events like fashion shows and food festivals, etc.

Piazza Mercantile merges imperceptibly into Piazza del Ferrarese. Historically this was the political centre of town, where Bari’s Council of Nobles met at the Palazzo del Sedile, and where debtors were flogged and punished at the Colonna della Giustizia that can still be seen in a corner of the square. A great number and variety of pizzeria and restaurants can be found in alleys surrounding Piazza Mercantile.

Lungomare Imperatore Augusto fill with people promenading back and forth every evening in the typical Italian fashion. The promenade in Bari Vecchia is raised over the sea and appears to lie on an old city wall, while the less crowded Lungomare Nazario Sauro in the new part of town runs along the harbor.

Piazza Garibaldi is the place to relax in the shade of tall tree. The public garden offers authentic Italian park life, where men crowd around obscure betting games, while women chat and children play.

Another annually recurring festival is Times Zones in November staging international performers with a repertoire of progressive and independent jazz, rock and electronica. The venue for most of these concerts is Teatro Kursaal.

And then there is the opera scene in the newly renovated Teatro Petruzelli. One of the great opera houses of Italy alongside La Scala in Milan, Teatro Massimmo in Palermo and Teatro San Carlo in Naples. The gorgeous Art Noveau building with a frescoed cupola, red velvet seats and gilded wood carvings burned down to the ground in 1991, but reopened in December 2009 after a reconstruction costing 20 billion euro.

Other notes on things to see near Bari in Puglia

The Puglian aqueduct and other sights

Beetroots in walnut sauce with white cheese
Scroll to top