Albano Carrisi is a very famous Italian pop singer you might go visit, if you happen to be in the Brindisi area.

Well, for those of you, who don’t know Al Bano aka Albano Carrisi with or without Romina Power, he (and she, ie. his former wife) are Italian pop singers, who made it big in San Remo and the Eurovision Song Contest in the 80s. A bit like Keld&Hilda, Svenne&Lotta, Sonny&Cher or Captain&Tenille. I write this tentatively, because all Italians – or at least all pugliesi – find it absolutely incredible that anybody, who was alive in the 1980s, haven’t got an Al Bano and Romina Power (who is by the way daughter of the famous American actor Tyrone Power, you know?) soundtrack to their lives. They are soooo famous. 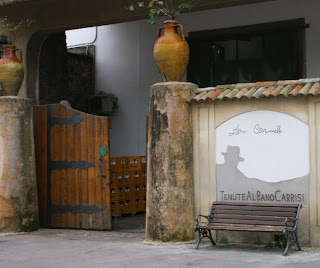 And they are not just famous for their hit music, the Italians stress, when they have finished rolling their eyes in exasperation over foreign cultural twits. They are also famous for their marriage, their tragedy, their break-up, and for Al Bano’s unwavering loyalty to the place, where he grew up, Cellino San Marco. Actually, Al Bano still lives in Cellino San Marco (or more precisely on the road between Cellino and Oria), where he has got his Tenuta, ranch, and where you can buy his award winning ‘Don Carmelo’ wine, eat at his restaurant, visit his casa discografica, or stay in his villagio. It is pure celebrity-star spangled magic.

The magic starts, when you come to a fork in the road and meet a 5 metre tall Madonna statue with widespread arms announcing that you have reached Tenuta Albano Carrisi. Further down the road, there is a boundary wall surrounding a small village in a kind of patchwork architecture merging different styles and materials. There is a park with lakes, streams and gold fish. And there is the restaurant, the enoteca, the church, and other facilities for residents.

According to the article ‘Un villagio di nome “Albano”‘, the popsinger has designed the buildings himself, just as he has taken part in the practical construction work. Maybe that explains the clash of tastes, and what he himself calls a fruit salad of various ideas, memories and feelings picked up on travels throughout the world.

Al Bano’s world can now be seen all year round outside Cellino San Marco, and his music can be heard on record, and on YouTube where he and Romina Power are forever performing ‘Felicità’, which happens to be the only Al Bano hit song, I remember having heard before.

Other sights near Cellino San Marco and Albano Carrisi

Italian artist at work in Guagnano 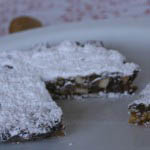