Magic waters and Moorish architecture with onion domes, crenelations and keyhole windows turn Santa Cesarea Terme on the coast of Salento into a fairy tale setting, where you can live like a princess from Arabian Nights.

It’s a strange sight that meets motorists driving south from Otranto towards Leuca on the tip of the Salento peninsula. Suddenly onion domes and colours more appropriate for the other side of the Mediterranean come into view, and you start to wonder if you have fallen through a rabbit hole.

Moorish Architecture as a Fashion Statement

The Puglian spa town Santa Cesarea Terme is spiced up with Moorish architecture that would be more at home in a suburb to Marrakesh.

In between the low, brilliantly white houses that cling to the rocky coast, presumptuous palaces with onion domes, winded columns, elaborate balconies, arches and balustrades comes into view. The peeling plaster is painted in douche pink, blue and golden colours not unlike liquorice allsorts, and you almost expect to meet a sultan and his harem in an outing from Arabian Nights. 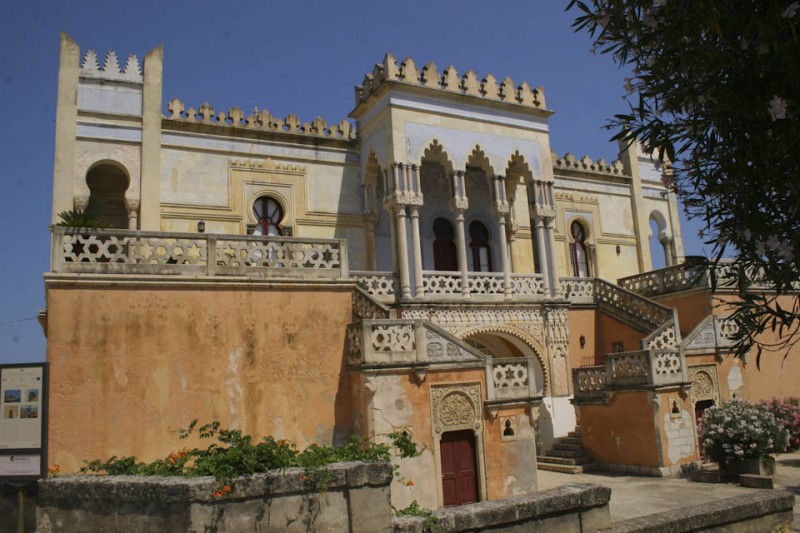 A hundred years ago Moorish architecture became a dominant building fad at the Salento seaside. Why I don’t know, but the style is particularly dominant in Santa Cesarea Terme and a good reason to visit, even if you don’t wish to take a dip in the thermal baths.

Apart from alluring architecture, Santa Cesarea Terme offers magic mineral waters that stimulate beauty and well being and alleviate the some of the symptoms connected with arthritis, rheumatism and skin diseases. There are even a few legends and myths linked to the waters.

Pagan myth links the origin of the sulphurous waters to the disintegration of the bodies of giants killed by mighty Heracles, while Christians associate the place with the legend of Santa Cesarea.

She was the daughter of a man and a woman who lived in the area once upon a time, and when the mother died her father insisted on taking the girl as his wife. Terrified she ran away from home and just before her father caught up with her, she came to a rock that opened up and beckoned her with heavenly light. When she entered the cave, the rock closed behind her and she found her way to heaven.

The night before Ascension the opening in the rock and the heavenly light still should visible from the sea. But I suppose you have to be a strong believer to witness the miracle.

More on the Lecce province

Cartapesta is not just for tourists