Old fashioned Trabucchi fishing machines surround Termoli’s old town, and although the contraptions have lost their economic importance they are still in use.


For some reason, I have always associated the characteristic Trabucchi – or trabocchi as it is also spelled – with the Gargano peninsula. These fragile wooden constructions that float above the water like a daddy longlegs caught in a web of weights, pulleys, pine sticks, rods and fishing nets, ready to seize any fish swimming past can be seen on the coats between Vieste and Peschici, but the ingenious fishing machines are also used further north. For instance, trabucchi surround Termoli’s old town, and although the contraptions have lost their economic importance they are still in use.

Connoisseurs may even spot a difference between Puglian versions and trabucchi in Abruzzo and Molise. On Gargano, the trabucchi fishing machines are placed on a rock overhanging the sea, fishermen in Abruzzo and Molise go farther out from the shore when they construct their trabucchi platforms, which can be accessed through a long jetty. The sea depth has to exceed 5 metres for the trabucchi to work and it should be placed correctly in relation to currents, seabed conditions, et cetera. 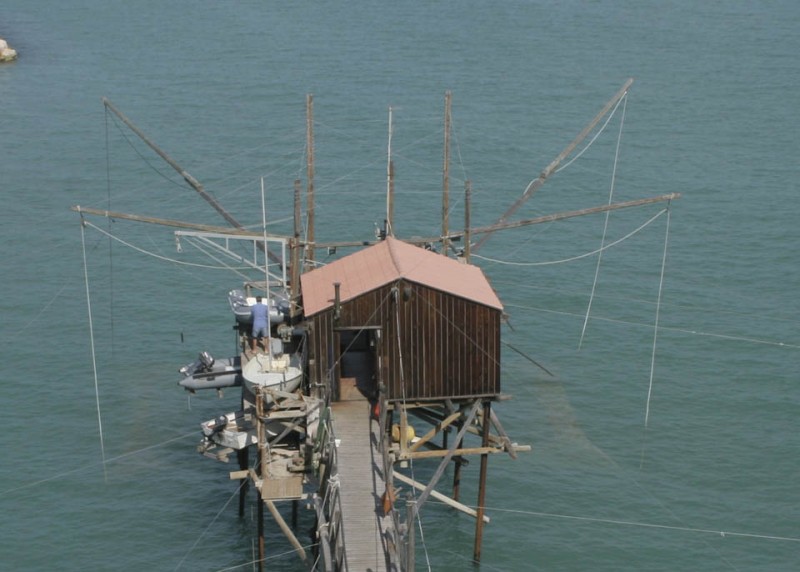 According to some sources the trabucchi originated in Asia Minor and was brought to Italy be the Turks. Other sources claim that the machine was invented by a seasick fisherman who wanted to pursue his profession with firm ground under his feet. And then there are those who maintain that the contruction sprung from the mind of fishermen who wanted to be able to work safely regardless of the weather. In any event, the trabucchis have been known from the mid 18th century, when the first equipment that should making fishing more like farming was introduced.

The machine is operated by a fisherman who sits with lowered nets in the shelter of the house, waiting for a shoal of fish to swim by. When the fish have reached the right position, the net is pulled up with the catch. In Termoli you can sit on a bench and study the trabucchi in operation, which is very entertaining, but personally I have not seen them land a worthwhile catch. The amount and size of the fish seem incredibly small compared to the magnitude of the apparatus.

Nonetheless, trabucchi have had great importance for the residents of Termoli up to World War II, when the fishing machines provided a steady supply of food. The equipment is therefore treated with great reverence and kept in good working condition. And in the meantime it has developed into a significant tourist attraction. Several trabucchi owners are willing to let tourists try their fishing luck from the platforms for a fee, and the gear does make a change from from normal angling and fly fishing.

More on Molise than trabucchi fishing

What to see in Molise