A small local museum guided us through a tragic chapter in recent Molise history with special focus on Isernia during WWII.


Thunder storms had washed out the outdoor cafés on Corso Marcelli, twilight concealed the views and a fenced-in archeological excavation looked like just another hole in the ground. It could be a very long evening for us as tourists in Isernia.

Light shone from a corner of the piazza, however, so I tried the moth-trick and found a small sign saying ‘Pro Loco’, which could mean anything really. In Italy, every town has a non-profit society for local history and tourism and sometimes it’s a private club, sometimes a library and sometimes an exhibition. It all depends on the efforts and initiatives of volunteers.

In this case, I thought I glimpsed a small museum, so I went down into the basement and asked the two ladies at the door, if I could have a look around.

– Yes, yes, but we are closing shortly, so you have to hurry. One of us has an old person, who must not be kept waiting. Just sign the book and walk through, one of them said.

She spoke good English with a strong American accent and typical Italian impatience.

– Today is a very special day for us, she continued. It’s September 10th – the anniversary of the bomb that destroyed a third of Isernia in 1943. We have just had a celebration to mark the date.

The guests had left, but we were still surrounded by mannequins dressed up as priests, nurses, blackshirts, as well as uniformed German and American soldiers arranged in small tableaus. Showcases displayed other kinds of WWII memorabilia like matchboxes, chewing gum, cigarette packets, surgical instruments and cotton gauze, but constant rushing didn’t leave time to dwell on the exhibits. 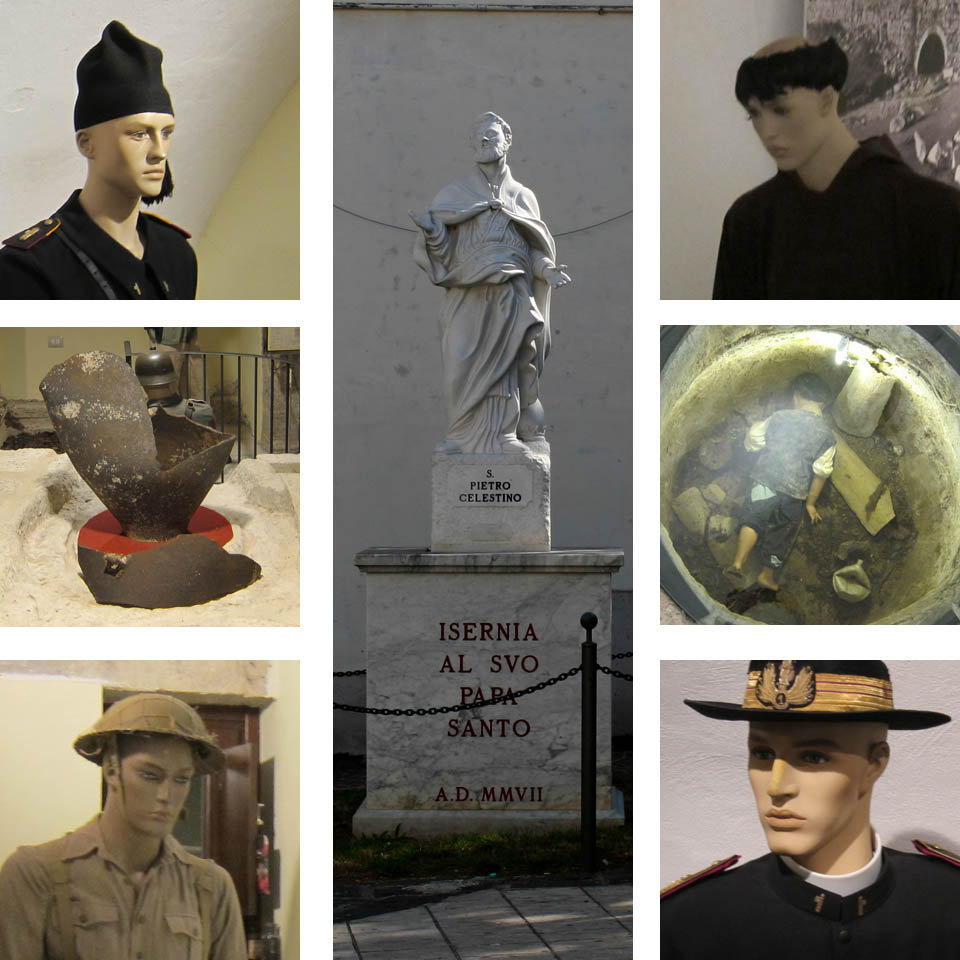 Some of the exhibits from WWII in Isernia. The statue in the middle is Isernia’s patron saint San Pietro Celestino.

The Boy in the Well

On the way out the woman seemed to regret her pushiness.

– Did you see the boy in the well, she asked, and pulled me back inside to show a glassed over hole in the floor with a boy mannequin at the bottom.

– After the bombing 7 children were found hiding in wells, most of them without clothes on. This boy was alive, when he was rescued, but unfortunately he died a few days afterwards.

To emphasize the gruesome story she led me to a broken iron casing and said:

– This is the bomb! It was found a few years ago among the roots of a tree by a man doing paving work – Right outside where you see the statue of our patron saint Pietro Celestino.

The tone of voice seemed to indicate some kind of miracle or divine intervention, but I haven’t quite figured out how. Outside the marbled impersonation of the only pope to have abdicated the papacy just spread his arms in a gesture that is more of a shrug than an embrace.

More notes on Italian history like Isernia during WWII

The Battle of Ortona

Medicine and gardens in Salerno

Street names: Roads to the unification of Italy