Things to See in Brescia

There are lots of beautiful and interesting things to see in Brescia, once you stop driving around in circles looking for a place to park the the car.

My first impression of Brescia was anything but positive. We had booked a hotel in the old centre and wanted to park the car within walking distance, but the GPS kept directing us through ZTL-zones in a maze of dead-ends.

I tried to make it understand that we did not want to go against the direction in one-ways streets or to dash through ‘No Entry’ pedestrian areas, but after three laps around the city we gave up, parked the car in a garage on the edge of town and ventured out on foot with wheelie bags in tow and only a Google map to guide us.

In the street we asked a couple of people for directions, but no one had ever heard of the address or the hotel before. In the end, a young girl took mercy on us and with the help of a tobacconist with a computer showed us which road to walk. After 20 minutes or so, we finally reached our destination. From that point on my perception of Brescia could only improve. And it most certainly did.

Brescia in Lombardy is a looker and a charmer, and there are so many attractions waiting to be explored that you need more than a couple of days to cover it all. Here is my list of the most important things to see in Brescia. 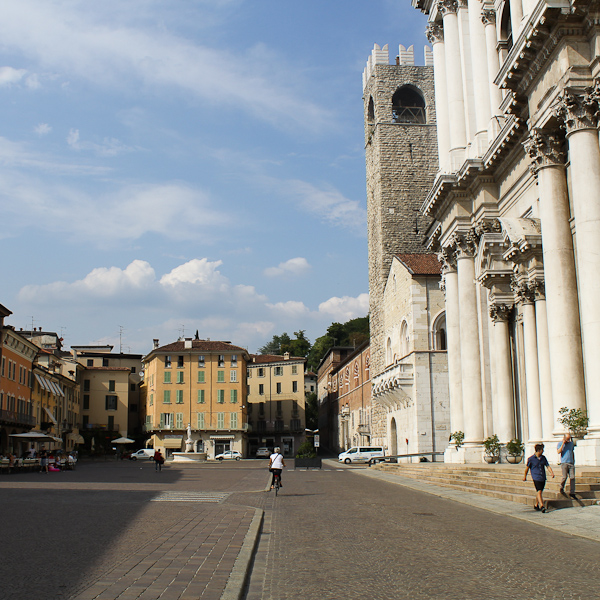 The stunning Piazza della Duomo in Brescia with its line of two churches and a medieval castle.

It is very hard to resist the urge of a drink and a bite, when you visit Piazza Duomo (or Piazza Paolo VI) in Brescia. The atmosphere is enticing, and once you are sitting down, you can enjoy the symmetry of the fountains of Minerva and the mistress of Brescia and a line of historic buildings from the circular 11th century cathedral La Rotonda over the towering Duomo Nuovo that was completed in 1825 to Il Broletto.

Il Broletto is a Medieval castle-like building that has housed the civic government since the 12th century. In fact, the tower is said to have survived a devastating earthquake which killed 20.000 people in 1159. It was used as a clock tower to summon citizens in case of enemy attacks. 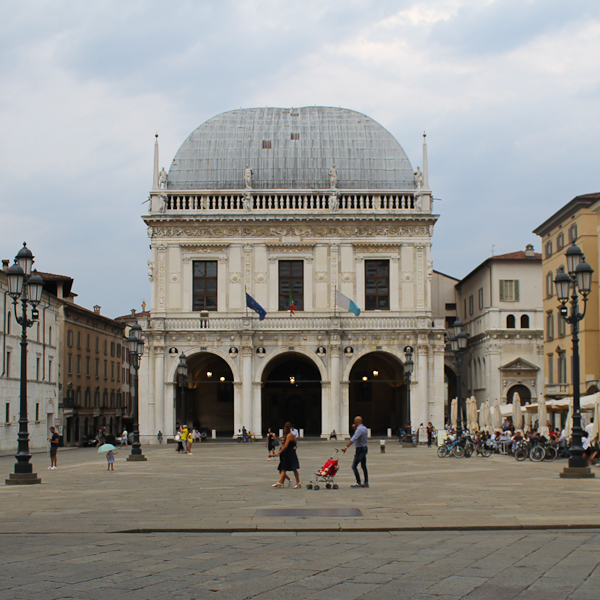 Piazza della Loggia is one of many beautiful piazzas in Brescia.

Another perfect place to engage in some serious people watching is Piazza della Loggia with the town hall as its centrepiece. Two of my favourite architects, Palladio and Vanvitelli, contributed to the design, and they are surrounded by interesting buildings such as two Christian lending houses with Roman tombstones embedded in the facade and the astronomical clock with Medieval robots to strike the hour. The clock resembles the ones in Venice, Udine and Bergamo and underlines Brescia’s history as part of the Republic of Venice. 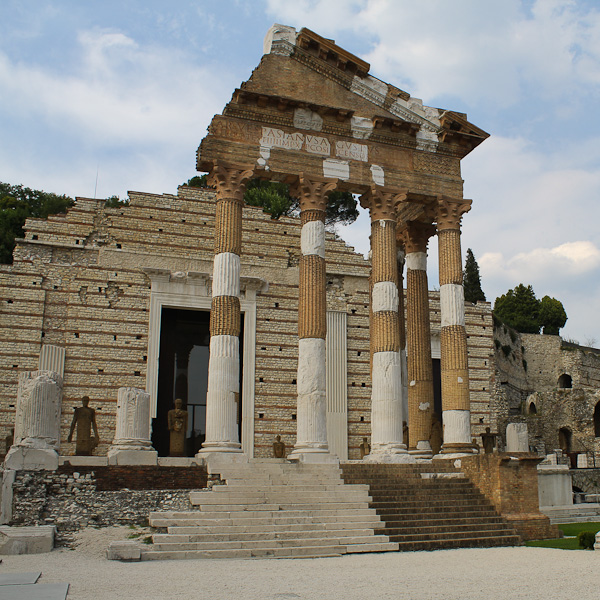 The remains of a Roman temple range among the must-see attractions in Brescia.

The Capitolium of Brixia and Other Ruins

For those who want a quick Roman fix to go with a visit to Northern Italy, the monument area of the Roman Forum in Brescia is a must see. The ruins that include a theater, a sanctuary and a temple are remarkably large and well-preserved, and compared to similar frescoes in Pompeii and structures in Rome, you can enjoy these archaeological treasures without having to fight other tourists for space. The archeological complex is part of Brescia’s contribution to ‘The Longobards in Italy. Places of Power (568-774 AD)’ listed as UNESCO World Heritage in 2011. 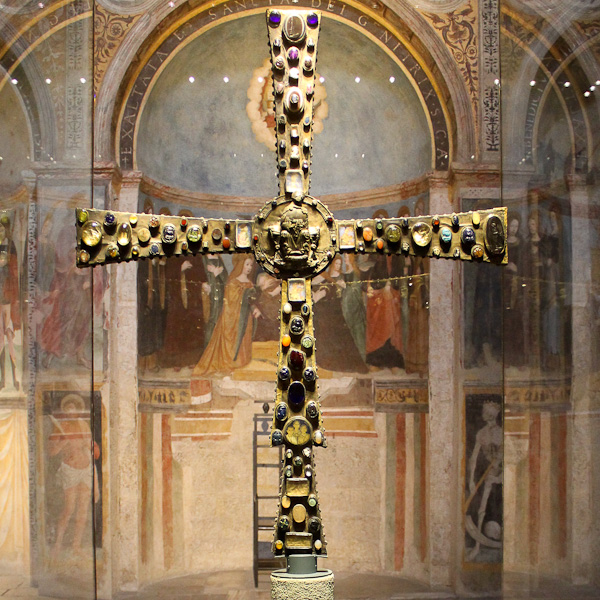 The golden Cross of Desiderius, studded with 212 precious gems.

Brescia’s main site UNESCO World Heritage site is, however the enormous, Monastic complex of San Salvatore-Santa Giulia. Today it has been transformed into a museum, and even with three hours to closing time we were warned against getting lost or delayed during our visit.
In spite of it being July, which is supposed to be a high season, I only noticed one additional visitor among numerous knowledgeable guides eager to share stories of the more than 11.000 works of art and archaeological finds in the former monastery. Look out for beautiful barrel vaults, vibrant frescoes and the golden Cross of Desiderius, studded with 212 precious gems. 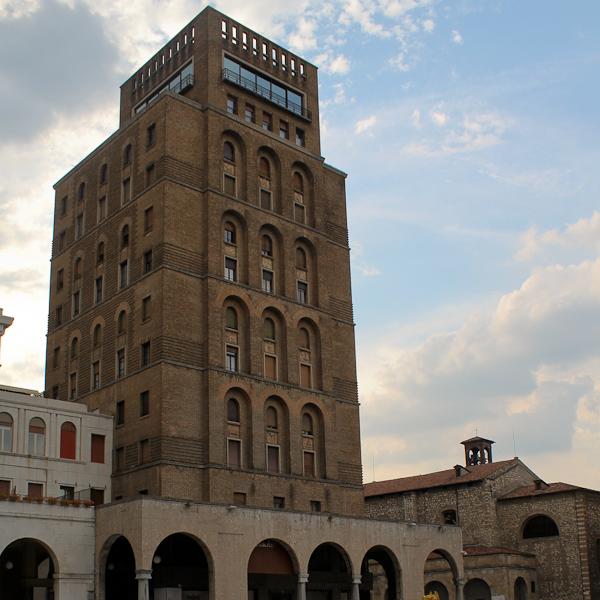 Il Torrione is allegedly the first skyscraper in Italy, built with inspiration from the Chicago School of architecture in 1932.

The First Skyscraper in Italy

Personally, I don’t feel comfortable among Italian Art Deco architecture which reminds me of fascism but I managed to suppress resentment and see il Torrione. Italy’s – and perhaps Europe’s – first skyscraper, built with inspiration from the Chicago School of architecture in 1932. The tower block is placed with rows of similar buildings on the eerily homogeneous Piazza della Vittoria.
At the time we visited, a summer school was doing a flash mob or a public stomp, and their noisy presence mitigated the hard and unapproachable appearance of the square.

Piazza della Vittoria was erected in around 1930 to replace the old Medieval part of Brescia. Il Torrione was designed in armoured concrete by the architect Marcello Piacentini as a classical column consisting of three parts with a base, a shaft and a capital. The 60 m tall structure has 13 floors, and according to a newspaper report of the inauguration Mussolini didn’t have the confidence to enter the new electricity driven elevator. He took the stairs to the panorama terrace on top of il Torrione and managed to arrive well ahead of all the other visitors that day.

In Italy, Brescia means Franciacorta, a high-quality, sparkling wine made in the image of Champagne, which simply has to be tried.
Other local specialities include casonsèi, that is over-sized ravioli with a filling of ricotta, egg, meat and strong cheese, mostly served with browned butter and sage. Polenta taragna made with a number of different cheeses. And exotic dishes of snails, frog legs and tripe.

Most restaurants and bars in Brescia are located in the area between Piazza della Loggia and Piazza Duomo, and incidentally that was also where we found our hotel called Albergo Orologio. (The nearest parking lot is on Piazza Mercato). There are numerous other hotels to be found in other parts of Brescia.

Italian NotesMonkfish with Tomatoes and Olives
Scroll to top