Vicenza – A Site for Pilgrims of Architecture

A total of 23 classic, renaissance buildings by the celebrated Andrea Palladio make Vicenza a site for pilgrims of architecture. And leaves even the uninitiated like me awestruck.

You can hardly pass through the gates to Vicenza’s historic centre without stumbling over one of the grandiose white buildings designed by the 16th century architect Andrea Palladio. The central Piazza del Castello leads directly to Corso Andrea Palladio, which would have been an ordinary high street if it wasn’t for the harmonious palaces of stuccoed brickwork lining the street.

Piazza dei Signori juxtaposes one of Palladio’s first works with one of his last.

Palladio’s genius was his ability to communicate power and wealth not by the use of expensive materials but in proportion and his strict adherence to classical Roma building principles. These houses are built to impress visitors and boost the ego of the owner by underlining their importance through tall porticos and elevated main floors known as the piano nobile.

Today banks and chain stores selling clothes and mobile phones have taken over the buildings on street level, but they still convey a baffling mixture of purity and pretention. 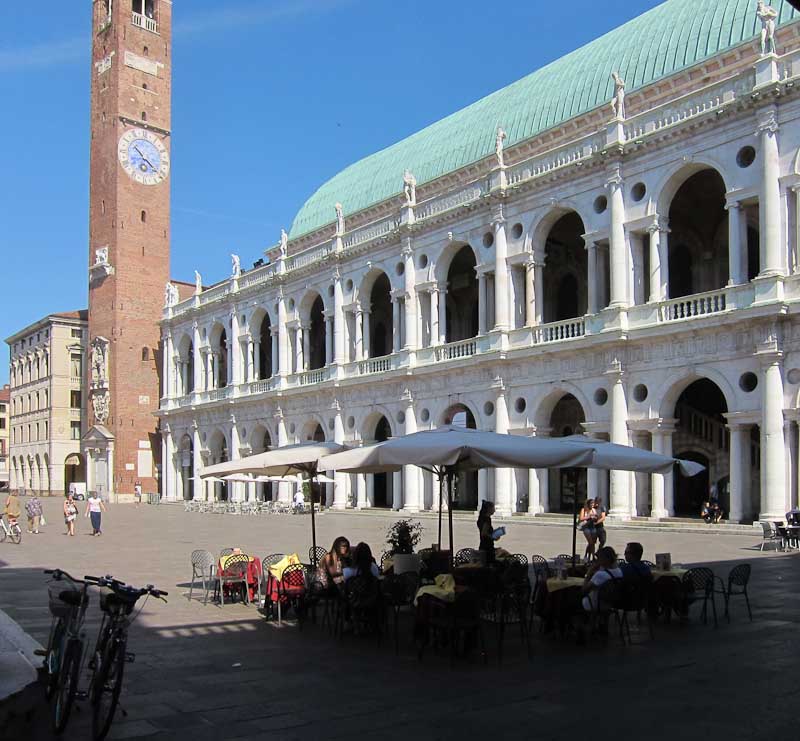 Born in Padua in 1508, Palladio was originally a stonecutter and a bricklayer of modest background, but at the age of 30 he was discovered by a benefactor who stimulated the young builder’s education. Impressed by his genius, Andrea’s first patron nicknamed him Palladio after the Greek Goddess of wisdom and arts and the name stuck. Shortly afterwards commissions started to flow in and Palladio ended up designing 23 palaces in Vicenza and a great many churches and villas in the countryside.

I have previously admired Palladio’s work in Udine and Bassano, but I wasn’t prepared for anything like Piazza dei Signori in Vicenza. The main square that hosts the local market on Tuesdays and Thursdays is surrounded by astounding buildings. And from his plinth in the corner Andre Palladio looks out over a scene he designed more than 400 years ago. 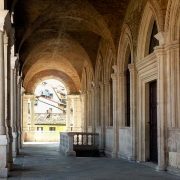 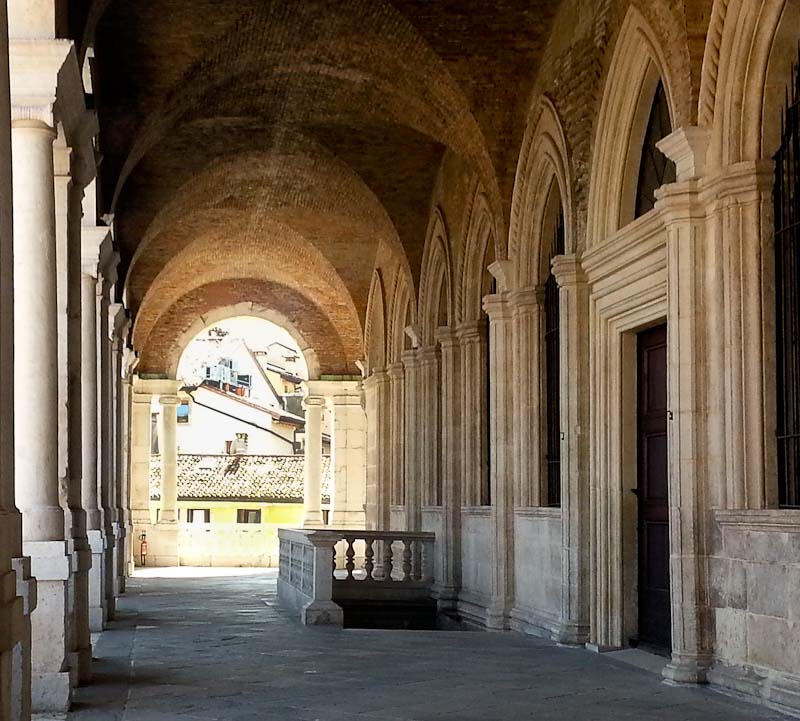 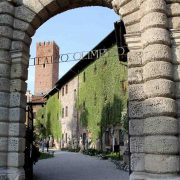 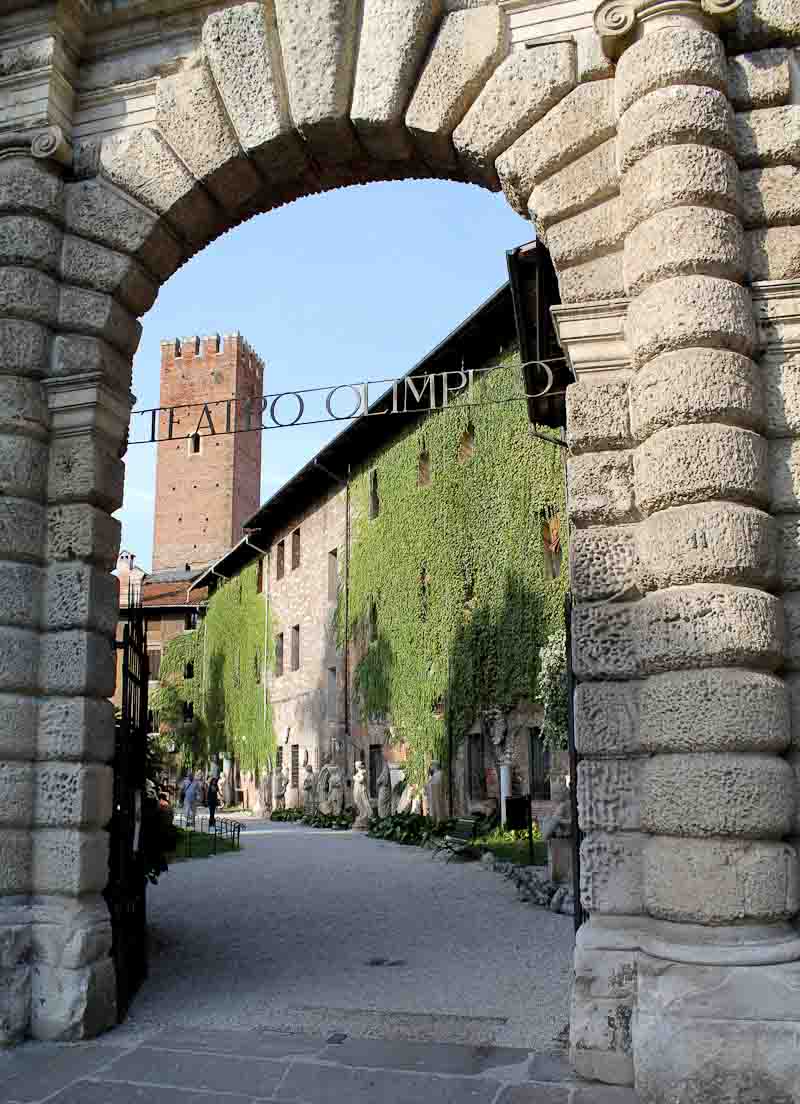 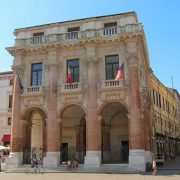 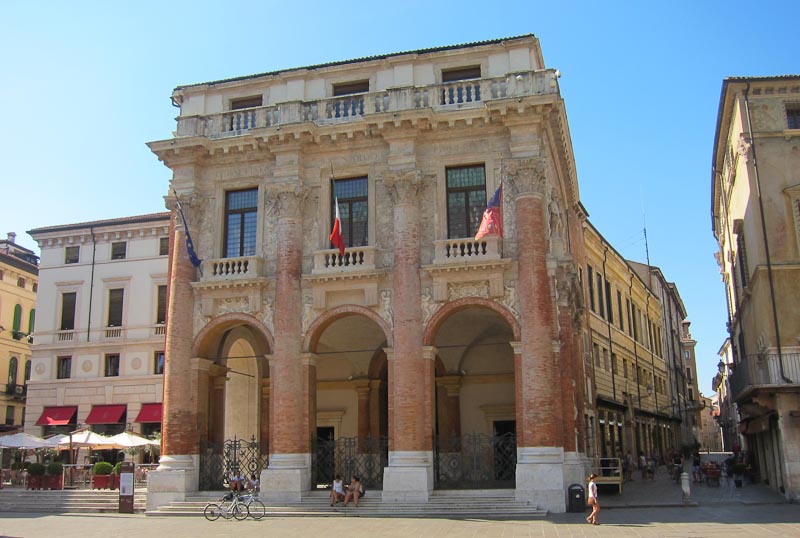 Piazza dei Signori is dominated by Basilica Palladiana that sparked Palladio’s career in Vicenza. The originally Gothic building was not a church, but a kind of town hall, and Palladio restructured it by adding a new outer shell with a loggia and portico that obscure the original façade.

We climbed the broad stairway and walked around the loggia on each floor before paying the entrance fee to the roof terrace, where there’s a fashionable cocktail bar, a parapet lined with statues that bring memories of St. Peter’s Square in Rome, and a stupendous view of the city.

From here you can see some of Palladio’s villas in the countryside and many of Palladio’s Vicenza landmarks including the Loggia del Capitaniato on the other side of the square.

Having seen Vicenza from above, we went down towards the Bacchiglione river  and Teatro Olympico and was Palladio’s  and one of his greatest with a stage set centered around ingenious perspective tricks and forced illusions. 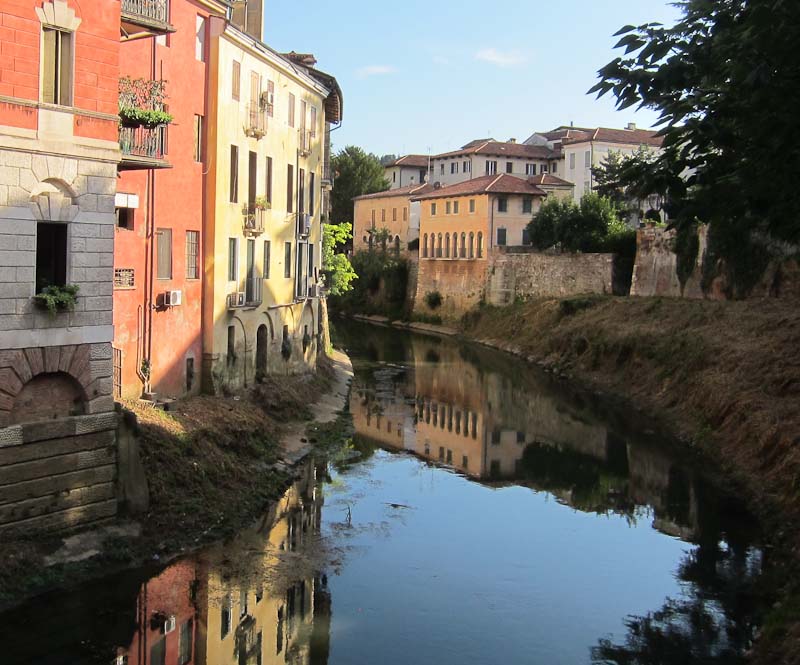 Residential area near the university of Vicenza.

One of the Most Influential Architects Ever

At that point I had started to see loggias, porticos and self-important houses everywhere, so it was a relief to hang out on the bridges among many-coloured residential houses near the University for a while, before completing the Palladio itinerary suggested by maps from the tourist office.

Despite it being the height of summer, there were curiously few tourists around, though we did see a few members of the European urban creative class that I took to be architects paying homage to the old master. At least they exhibited an extraordinary interest in the photography of architraves, entablatures and triglyphs (- and no, I don’t know what that means either).

What I do know is that Palladio is one of the most influential architects ever. His legacy was cemented by the publication of an architectural treatise that could be read as a book of rules. He has inspired the design of the White House and Capitol in Washington DC. And the entire city of Vicenza became UNESCO World Heritage in 1994.

This in itself should explain why Vicenza 6o km west of Venice deserves a pilgrimage.

Maps were disabled by the visitor on this site. Click to open the map in a new window.
9 replies

Fettuccine with peppers from Senise and a crunchy topping