Pilgrims in Monte Sant’Angelo in Puglia come to see an underground cavern, where the archangel Michael set up his shrine.

It was not for lack of encouragement. As soon as the car had finished crawling up the winding road and was parked at 852 metres altitude, willing guides offered to show us around and present the local attractions of Monte Sant’Angelo on Gargano.

Their offer was rejected. Again and again and again, and … while we strolled around the tiny town with row after row of identical white gabled houses, strangely reminiscent of an English mining town in its Sunday best. Interesting and enjoyable without being able to fill a postcard. But then again I missed the opportunity of seeing a print of the archangel’s hand, and that irks me still. That’s what you get from not reading guidebooks and turning down tourist hustlers.

The main attraction in Monte Sant’Angelo is an underground cavern, where an oracle that was allegedly able to cure diseases overnight lived in pagan times. Ailing people came to this cave carrying the skin of a black ram, then they would lay down on the skin to sleep, and the next morning they would be miraculously healed.

Subsequently the archangel took over the pagan shrine. According to legend a man living in the mountains of Gargano in 490 AD lost a fine bull. He looked for it for hours, and at long last found it standing at the entrance to the cave at the top of the mountain. The man tried to lure the animal away, but nothing helped. 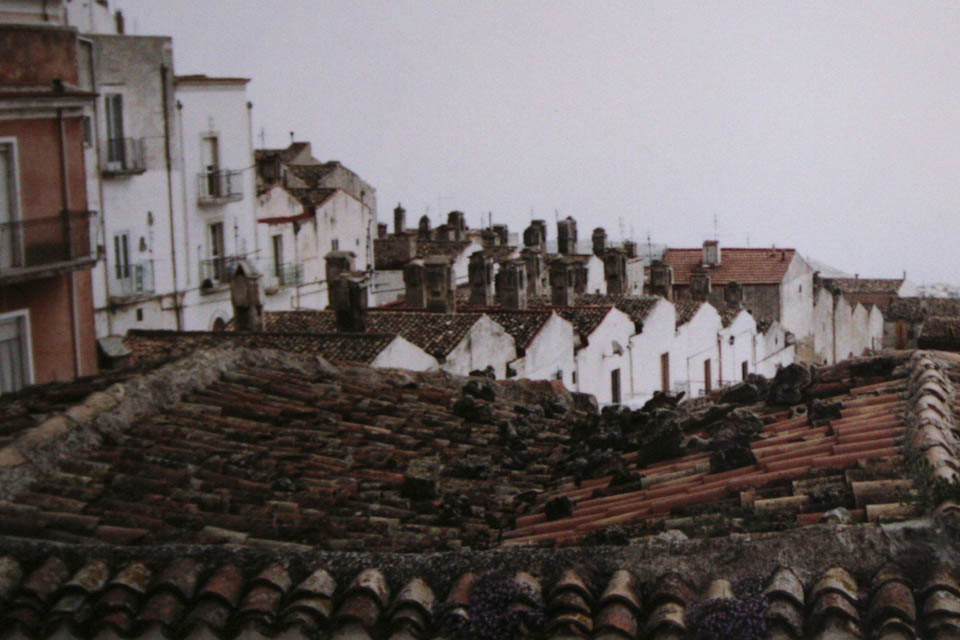 Eventually he became so desperate, he shot an arrow at it, but instead of hitting the bull, the arrow turned around and hit the man. This course of events, he found a bit strange, so he consulted the Bishop of Sipontum (today’s Manfredonia), St. Laurentius. The bishop went out to the mountain to study the matter and pray, and while he was there, he saw a winged man with a red cape.

The man with the cloak said he was St. Michael, the first of seven archangels, commander of the Army of God that led souls to paradise and guarded the forces of hell. The angel had gone to the mountain in order to wrest the cave from the pagan oracle, and he had summoned the bishop to inaugurate the cave to St. Michael and other angels.

The bishop entered the dreary cave, but once inside it blazed with light and in a corner he saw an altar covered in purple that had just been inaugurated by the archangel himself. This miracle transferred the cult of St. Michael from Asia Minor to Gargano, and Monte Sant’Angelo became an important pilgrimage site. Especially, for the Normans to whom St. Michael was the patron saint of warriors, blessing their sometimes bloody conquests.

In order to enter the archangel’s church, you have to pass through an archway with an inscription that reads something like: ‘This is an awesome place, the house of God and the gate to heaven.’ Words, that did not exactly read as an invitation to step inside.

If we had done so, we would, according to eg. HV Morton’s descriptions from the late ’60s, have seen a staircase with 86 steps leading down to some fantastic silver doors dating back to 1076. You enter the cave, where a holy spring makes the floor slippery, and between the steep rock walls are a crude altar, side altars, a bishop’s throne and a famous statue of the archangel himself. On the walls you will find graffiti and foot and hand imprints of earlier pilgrims, including several kings and popes. Morton also saw pilgrims licking the floor, but already at that time the practice was rare and basically forbidden, so hopefully it is a thing of the past.

I did not even buy a souvenir pilgrim stick at the stall outside the church but walked away with a pasta roller instead. We all have something we hold sacred, I guess.

Other notes like this one one pilgrims in Monte Sant’Angelo

The beautiful frescos in Arezzo Italy