Pietrapertosa and the flight of the angel

Pietrapertosa and Castelmezzano are both classified as being among the most beautiful villages in Basilicata, but it’s not just the views that attract tourists.

There aren’t many stops on motorway E847 that connects Napoli with Bari, which may explain why we always end up having lunch at the greasy Oasi Grill between Tricarico and Potenza. It’s definitely not a recommendation of the food or the facilities, but it serves the purpose, and last time we stopped I noticed a road sign to Pietrapertosa. 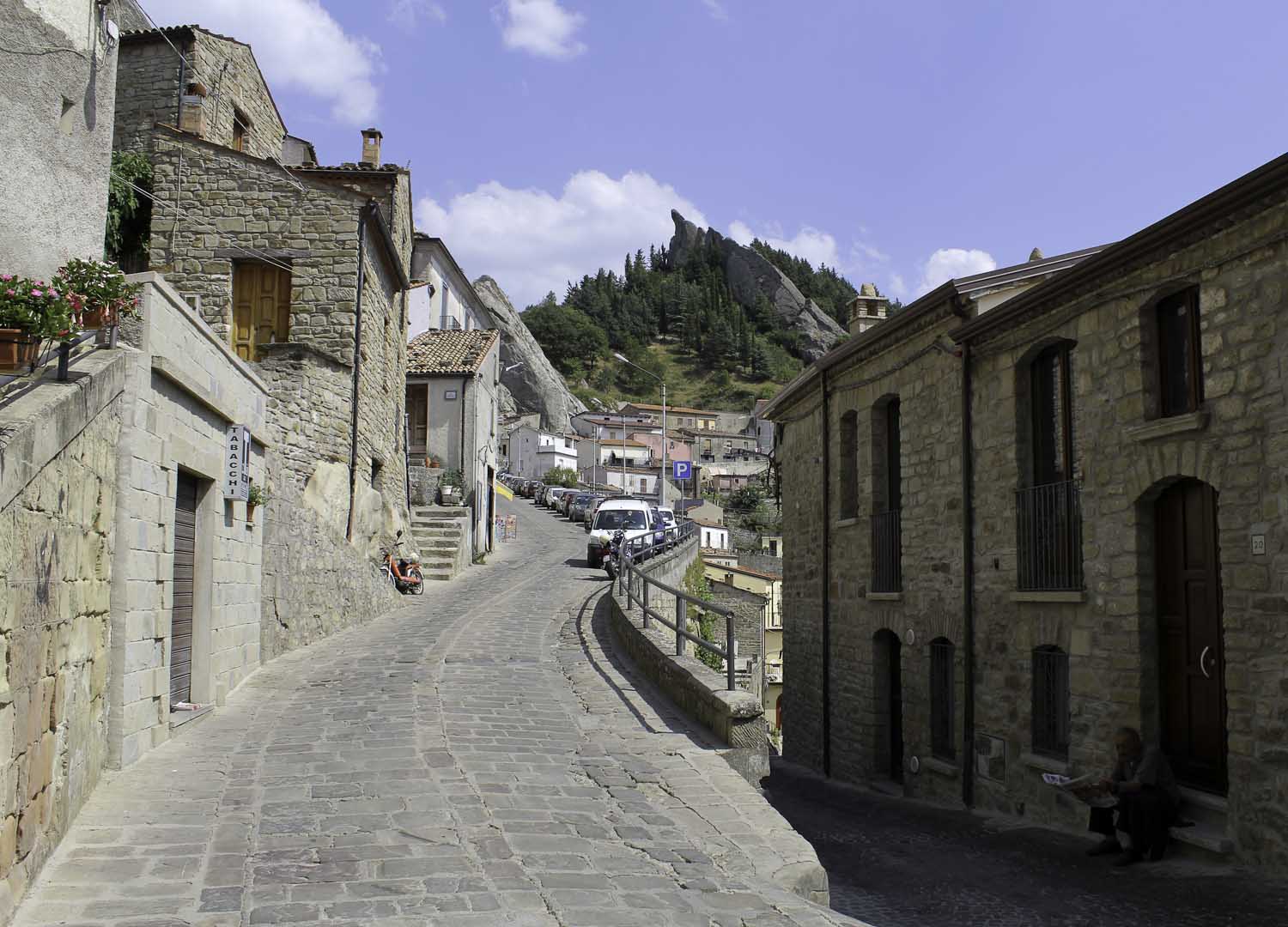 There’s basically only one street in Pietrapertosa.

Pietrapertosa is not one of the best known villages in Basilicata, but it ranges among the most beautiful, built on a rock summit 1088 metres above sea level, so of course we had to visit. Unfortunately the Oasi Grill does not sell petrol, and there’s a warning of no petrol stations ahead by the road before you start the ascent. The distance from the valley to Pietrapertosa is only 12 km, but it’s a steep climb on a zigzag road, and although we had fuel for 70 km, when we started, there were only fumes left we we reached a tank in Potenza after the detour. 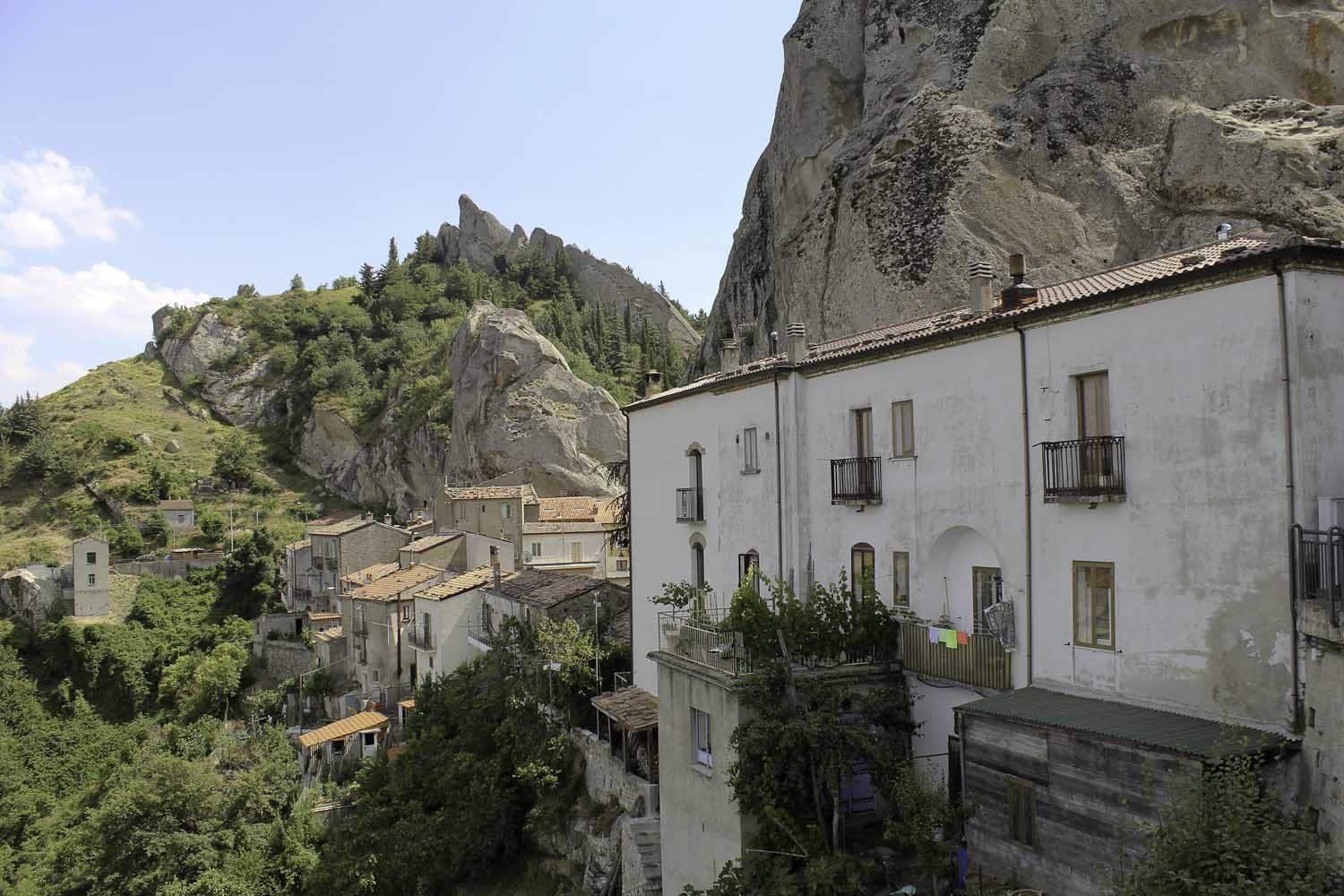 The houses facing east have their backs to the rugged mountains.

The flight of the Angel

The sense of adventure was also increased by signs announcing that the road to Castelmezzano was closed due to erosion, and – as we approached the characteristic rocky spikes that have given these mountains the name Lucanian Dolomites – by a whoosh and a scream as something shot through the air high above our heads.

Apart from the beauty, Pietrapertosa is famous for a high-speed zip-wire called Volo dell’Angelo. Harnessed onto a steel cable thrill-seekers can “fly” over the gorge separating Pietrapertosa from Castelmezzano at a speed of up to 120 km per hour. I’m not that brave, but it was clear that the Flight of the Angel held great attraction to visiting Italians, who were lined up outside the ticket office. 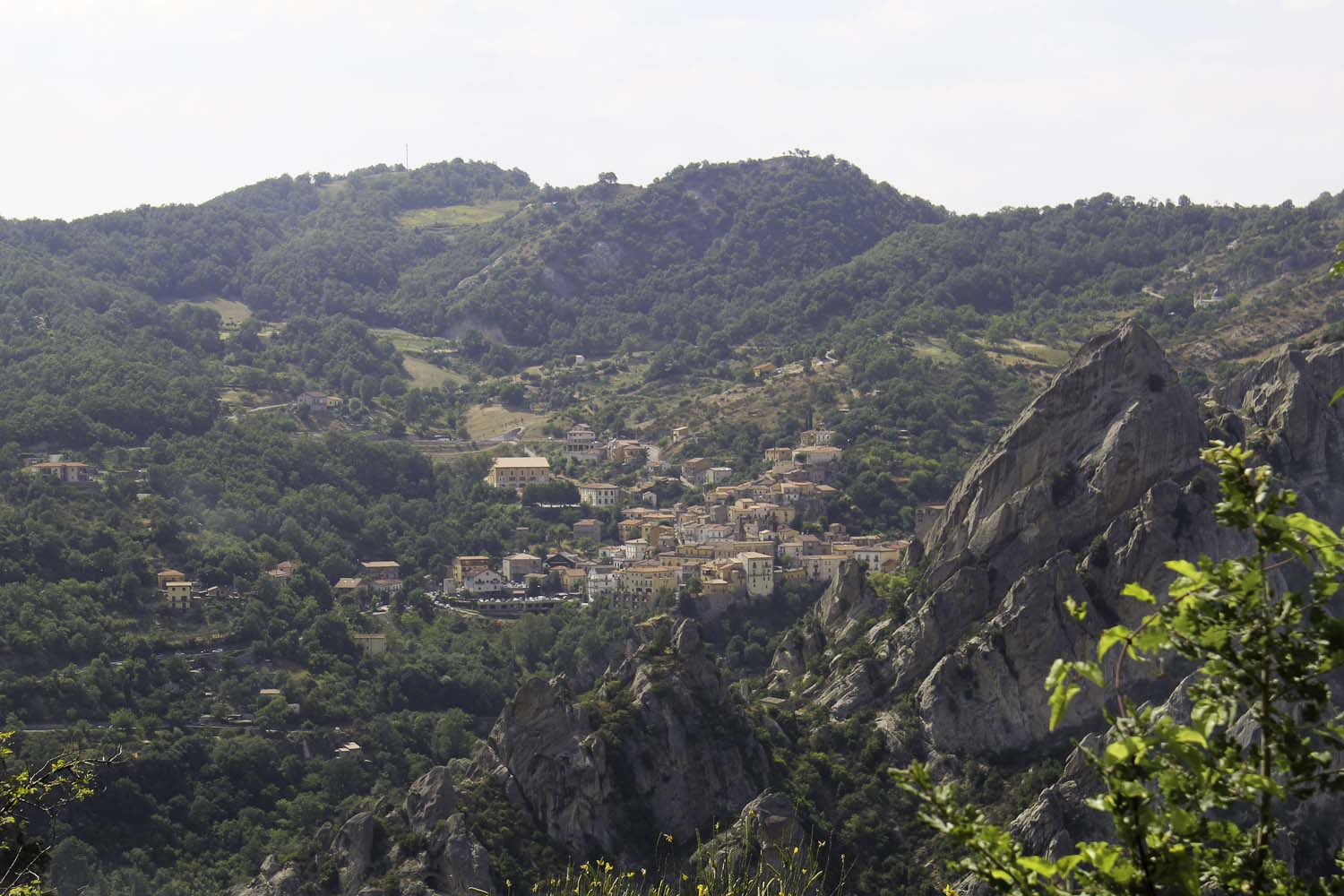 View of Castelmezzano acroass the gorge.

You can also walk from Pietrapertosa to Castelmezzano. There’s an old farmer’ trail connecting the two villages and the distance is only 2 km, though the elevation going from a 920 metre altitude in Pietrapertosa down the valley in 660 metres to cross the Caperrino stream and back up to 770 metres in Castelmezzano can be a challenge. Especially if you are out in the summer sun. People in the Pro Loco shack at the point where you enter the village will help with further information. 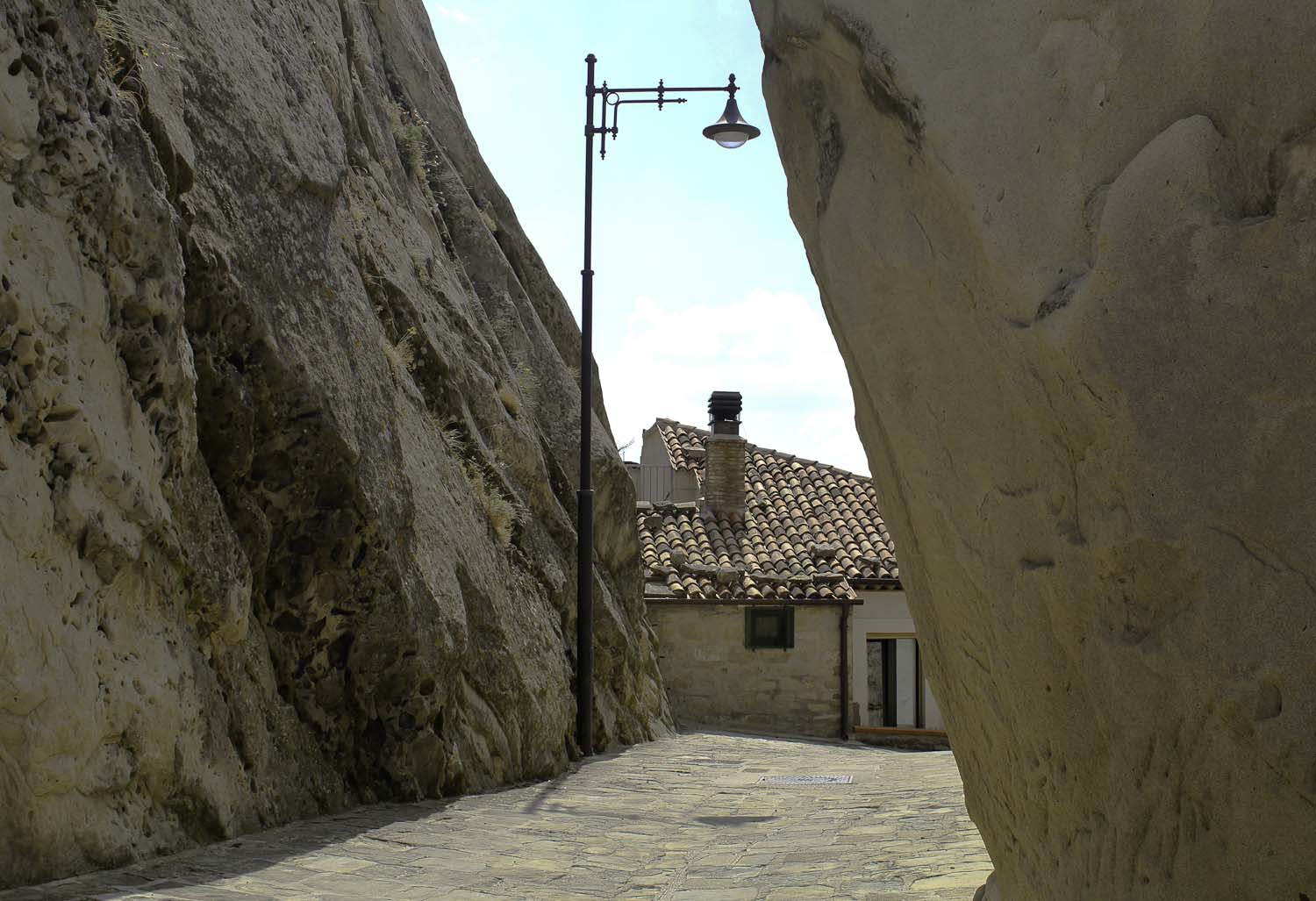 A house squeezed in between two rocks in Pietrapertosa

Life among the rocks

We settled for a walk through this remarkable village, where houses crop up in and among the rocks. Pietrapertosa has existed for more than two thousand years, as a natural fortress that dominates the Basento Valley.

Perched on top of the tallest cliff in the village there’s a Norman castle from where you get an uninterrupted 360 degree view of the mountains with evocative names like ‘the Hawk’, ‘the Anvil’, ‘the Great Mother’ and ‘the Owl’. Far below there are forests, rivers and ravines, where red kites, kestrels, and peregrine falcons have their nests. The landscape is fascinating. It’s not hard to imagine why the this place was so popular among the brigands of the 19th century. Or among hikers and adventure travellers today.

The influx of tourists help to keep the village alive. Considering the inaccessibility of the location, the town of Pietrapertosa is surprisingly big with about 1000 inhabitants. The houses that fill out the space between the rocks look inhabited and there are plenty of B&Bs and restaurants, so next time I’m in the area, I think I’ll stay the night and see the sun set over Castelmezzano. 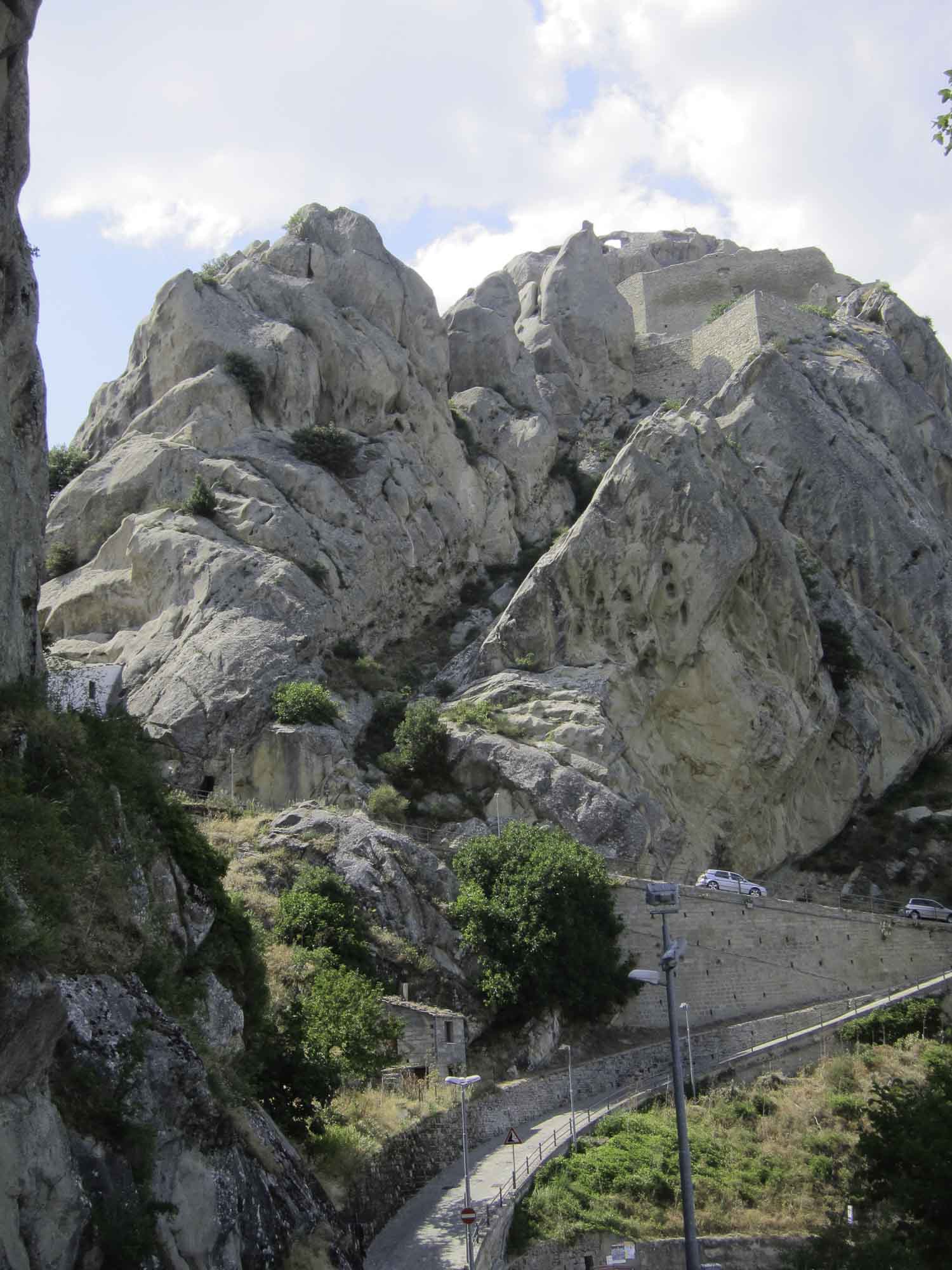 An old castle is perched on top of the rock 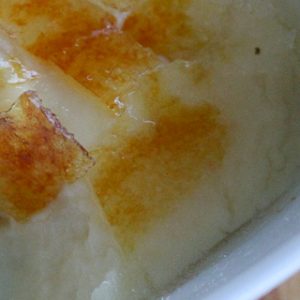 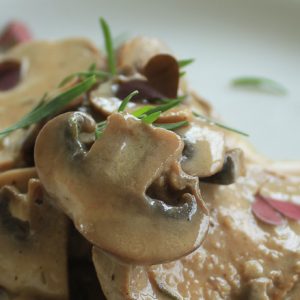 Lamb fillet with mushroom and tarragon sauce
Scroll to top