I’m always amazed by the number of eagles over Basilicata. Big birds-of-prey are constantly circling the folded and eroded hills of the Lucanian Apennines.

Even though I belong to the group of people who barely know the difference between a swan and a sparrow, there is something fascinating about the sight of birds of prey, when they are hanging still in the sky like a helicopter or floating around with smooth gliding movements.

Whether it was eagles, buzzards, kites or hawks that flocked over the Lucanian Apennines this summer, I can’t say, but the birds of prey were definitely there. In 4-5 hours, I counted eleven eagle-like birds circling over the desolate, barren mountain folds.

The stretch from Scanzano Ionico, where the Italian government has had – and maybe be still has – plans to build a dump for nuclear waste, over Montalbano to Stigliano and Sant’Arcangelo resemble a cross between a lunar landscape and a sandbox. There is distance between cars and even longer between houses and cities. Instead, you see how volcanoes, erosion and earthquakes over the course of time have cut, moved, folded and shaped the landscape, giving it a distinctive nature. The effect is at once magnificent, frightening and very, very beautiful. 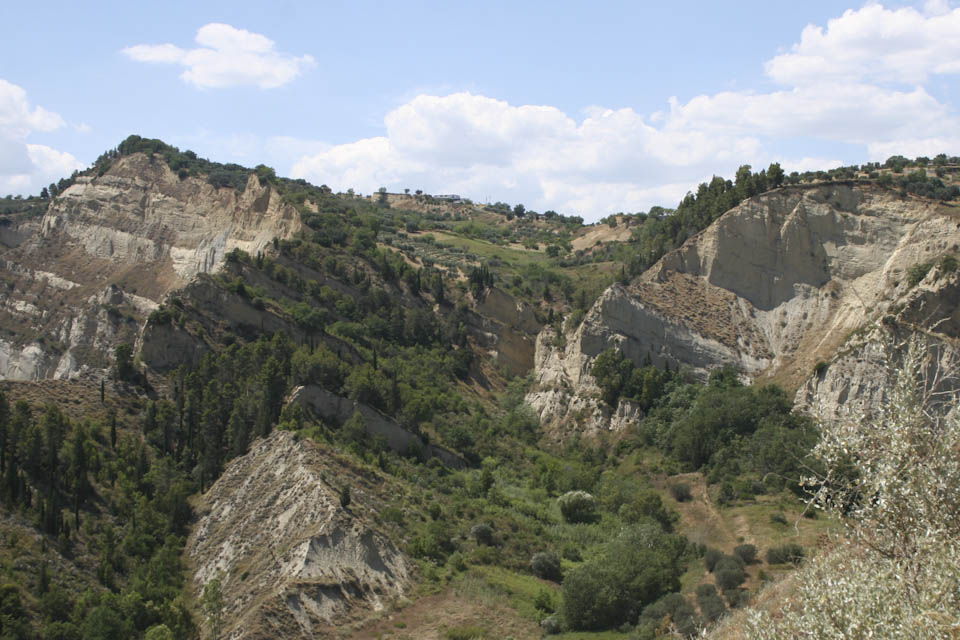 Though not captured on this picture, eagles are often seen soaring above the eroded hills between Aliano and Stigliano.

The landscape does not seem to have changed since antiquity. There are neither shops, mobile antennas or signposted paths, and the only feature signifying 21st century progress is the tarred road.

Animal life has not changed notably either. Allegedly the mathe-magician Pythagoras, who lived in the area 500 years before Christ, called down an eagle and made it sit on his head. Apart from proving the theorem that the sum of squares of the two sides in a right-angled triangle equals the square of the hypotenuse, the ancient Greeks also had the ability to speak with animals, and this skill gave him a large following in Crotone and later in Metaponte.

Then, as later, the vision of strong, independent birds of prey was interpreted as a good omen. The most prominent exception to this rule is found in Shakespeare’s Macbeth, where the beastly murder of Duncan reverses the natural order of things, and an owl preys on a falcon.

However, we are very far from dark, rainy Scotland. The blue skies and burning sun of Basilicata provides more evidence of the strong ties between the eagle and the sun. According to legend, an eagle should be able to stare directly at the sun without blinking. These birds have tremendous power of vision, and therefore people with a keen eyesight and good sense of detail are said to have eagle eyes.

Tips to survive the heat

The trulli in Alberobello
Scroll to top