Ferrara and the Origin of Urban Planning

According to UNESCO World Heritage, the origin of urban planning can be traced back to 1492 in the town of Ferrara in Emilia-Romagna.

I visited Ferrara at the end of July, just before the inner city was taken over by the annual busker festival, and was kind of puzzled by the airy, open spaces and systematic neatness of the street plan. While most historic Italian cities have grown like a cobweb with a rather crowded centre, Ferrara spreads out along two principal and perpendicular axes. In the inner, mostly pedestrian city centre a string of public squares, courtyards and gardens connects the dominant palaces and churches which are surrounded by an extension made in a strictly controlled grid of streets and buildings. The two parts appear perfectly integrated.

The city layout looks like – and is – the result of meticulous urban planning, as you can see in any modern town, but in Ferrara the planning was completed and implemented in 1492. Ferrara is the first realization of the humanist concept of the ideal city and the only planned Renaissance town to have been completed.

The design is attributed to a military engineer called Biagio Rossetti, who also built the extraordinary Palazzo dei Diamanti.  He managed to balance the humanistic principles in architecture with local traditions and the physical needs of a city. 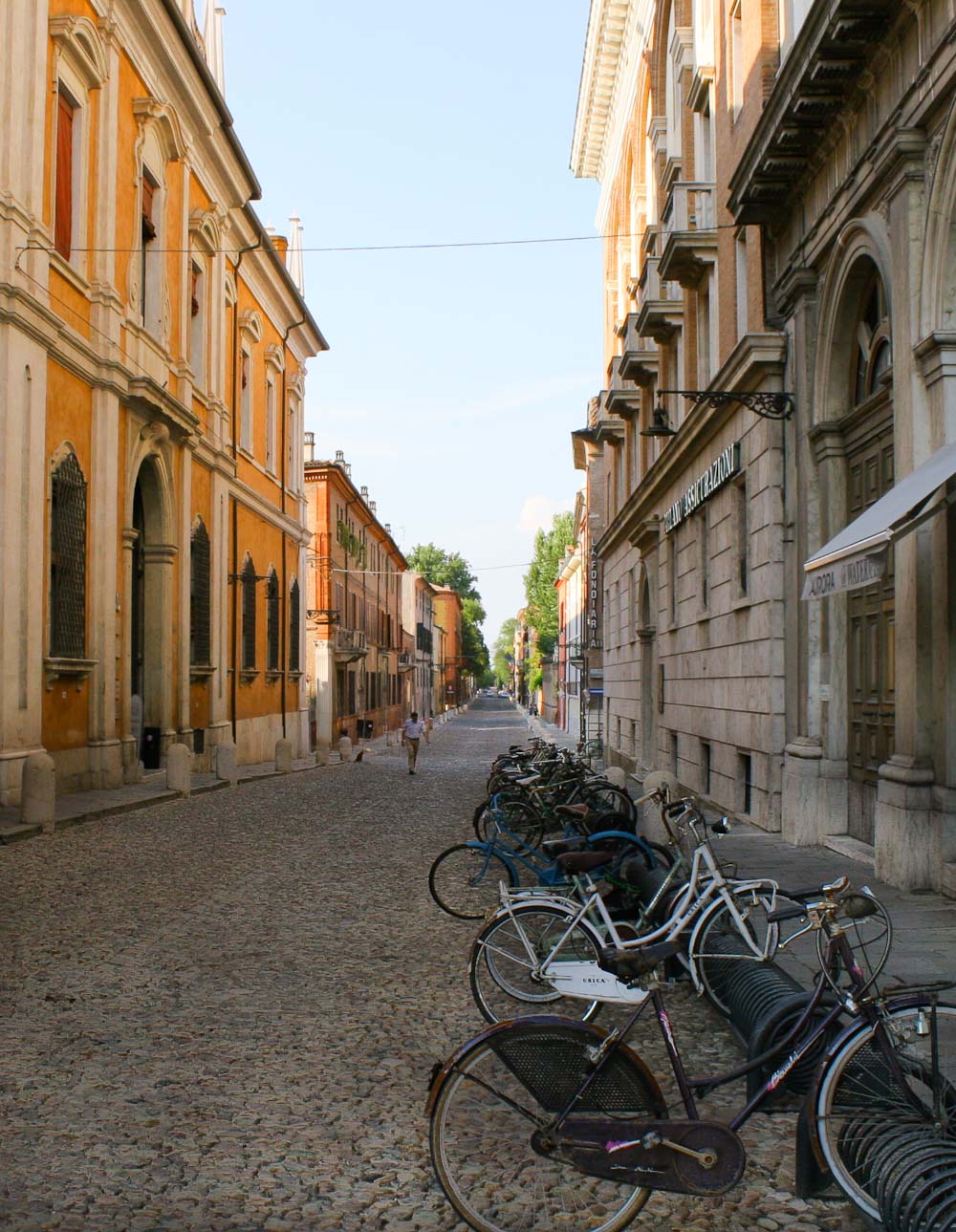 Broad streets in a matrix of straight lines helped improve hygiene and accessibility in the medieval town Ferrara.

Accommodation for the Lower Classes

The streets were extraordinarily wide and well leveled for medieval times, which made them better suited to heavy traffic – a recognized problem already 500 years ago. They crossed at more or less straight angles making crossroads less problematic. And central water supplies and sewers improved hygiene and drainage in case of flooding from the Po River nearby. Thus Ferrara became one of the first cities to offer decent accommodation to the lower and middle classes, who did not live with the clergy, bourgeoisie and aristocracy in the city centre.

The quiet predictability and functionality of the city plan makes a walk down Corso Ercole I D’Este in Rossetti’s addizione almost boring, but as soon as you cross the Largo Castello the city comes alive with lots of cafés, bars and gelaterie, where people gather for a drink and a chat after work.

Other attractions near Ferrara

Five sights not to be missed in Ravenna

Maps were disabled by the visitor on this site. Click to open the map in a new window.
14 replies