Mantova, a short drive from Lago di Garda and Verona, used to be the cultural hub of northern Italy.

Mantova still looks like a opera setting. Especially at night when a full moon accentuates the romantic shadows of the town centre’s arcades, colonnades, towers, domes and rows of merlature and when the windows of the Palazzo Ducale are lit up to reveal glimpses of the gilding and artworks concealed within. You almost expect to see an armoured knight or a Swiss Guard step forward onto the otherwise deserted Piazza Sordello, but after closing hours the only steps echoing on the cobbled stones are your own. Most tour operators allow only a short stop in Mantova on the way from Verona to Venezia and Firenze, so the busloads of tourists discharged on a daily basis along the three artificial lakes have gone long before darkness falls.

Instead locals dressed up for the ritual evening ‘passagiata’ take over the city. The piazzas and narrow streets between a seemingly endless row of churches and palaces get so crowded with push chairs, bicycles, runny ice creams and outdoor restaurants, that you forget to notice the magnificent medieval buildings all around. People no longer look up at the cage on Torre della Gabbia that used to be an openair prison where criminals dangled in public, or try to work out the time by means of the astronomical clock on Torre dell’Orologio. They stroll along in high heel and shiny shoes, kiss the air beside the cheeks of their friends and study the menu at the inimitable Trattoria Cento Rampini on the Piazza del Erbe, generally having a good time.

For some reason the large square in front of the austere and defensive looking ducal palace is not part of the circuit. Perhaps people are awed by the unassuming exterior of the Gonzaga residence that allegedly hides 450 rooms, a basilica, 15 courtyards and grand collections of art. It is so incredibly huge, and that I’d be lost without the guiding arrows or a gps, which is why I’ll have to save  a description of the interior for some other time. 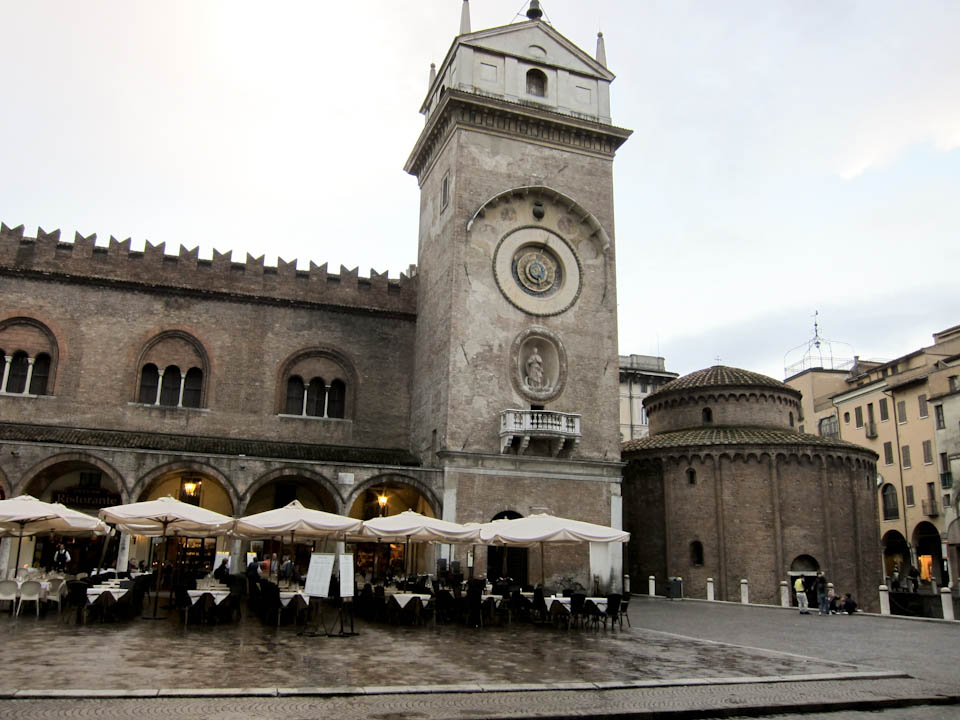 Piazza del Erbe with the Torre dell’Orologio on a rainy day in May.

Other things to see in Mantova