Trento and the Annual Polenta War

The annual Trento polenta war dates back to a dispute with the neighbouring town Feltre some time in the 6th century. But the battle is still reenacted every summer.

I hadn’t heard about Trento and the annual polenta war, before we made a stop in Trento on June 25th. It was in the middle of the celebration for the patron saint San Vigilio, and the whole town was abuzz with performances, processions and fireworks. It was great fun to watch, but suddenly we found ourselves surrounded by a group of fully grown men who looked like the Beagle Boys with black half masks hiding their faces and identical attire in grey and black. They rallied around a banner of similar colours and rushed through the streets under the command of some sort of captain.

Later I learned the reason for of their urgency. We were stuck in the middle of the annual ‘Mascarada dei Ciusi e dei Gogj’. And these men were “Gobj” on their way to protect Trento’s provision of food from the scoundrels from Feltre known as the “Ciusi”. 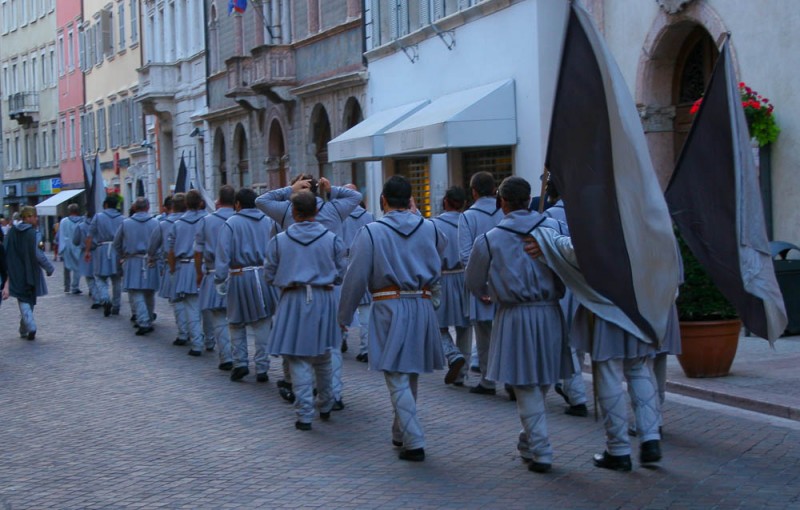 The proud “Gobj” on their way to defend the polenta and women of Trento against neighbouring scoundrels.

There is only 79 km and a few mountain tops between Trento in Trentino and Feltre in Veneto, yet the two towns are not exactly on friendly terms. There’s a lot of mistrust and animosity among the people said to arise in the 16th century, when the people of Trento invited their neighbours from Feltre over to help complete the city walls. At that time, the harvest had failed and to combat famine the guest workers tried to steal corn from the granges of Trento. According to legend this led to the first polenta war.

Tug of war around a cauldron

To commemorate this tragic event in local history, groups of men reenact the battle on an annual basis. But first a group of women dressed in traditional dirndls of full skirts and aprons prepare a huge cauldron of polenta in the middle of a battle ground. The black and grey heroes of the battle take a firm grip on each other’s belts and form a ring around the cauldron with their back to the women. And then they are attacked by gangs of “Ciusi”, easily recognizable on their hideous masks in combination with a warty red and yellow suit.

Equipped with brooms the women try to help their men by bashing the intruders on the head. A tug of war ensues as the “Ciusi” try to break through the ring and abduct some of the food or one of the women. But I suspect the “Gobj” always win in the end. Nevertheless, it’s a highly entertaining spectacle to watch, so if you are near Trento during the last weekend in June do not miss the annual polenta war.

Chicken with almonds and apricots
Scroll to top