A guided tour of Rossano

Our tour of Rossano started as a quest for liquorice and ended in friendship and dinner. In between the two, we did a guided walk to all the places that makes this town in Calabria so very lovable.

On a shelf in my office I have an old tin marked ‘Liquirizia Amarelli Rossano’. So when we drove past Rossano earlier this year, I wanted to make a stop and find out why a town in Calabria has become famous for its liquorice. We wrongfully assumed the answers could be found in the old town perched on a hill some 3 kilometers inland from the modern port, so we went right up to the historic centre to have a look around.

A view of the bay towards Policoro.

It being Sunday, the streets were deserted and apart from a tiny park with a magnificent view there wasn’t much to see. We considered moving on, but were stopped by a woman telling us to go on and pointing out the direction of the main square. The woman and her husband were heading in the same direction and offered to keep us company.

– Just before we met you, we saw another tourist family, who turned around and left town without seeing anything. That was such a pity, but they didn’t speak Italian, so I could make them understand what they were missing, the retired school mistress named Rosa explained. 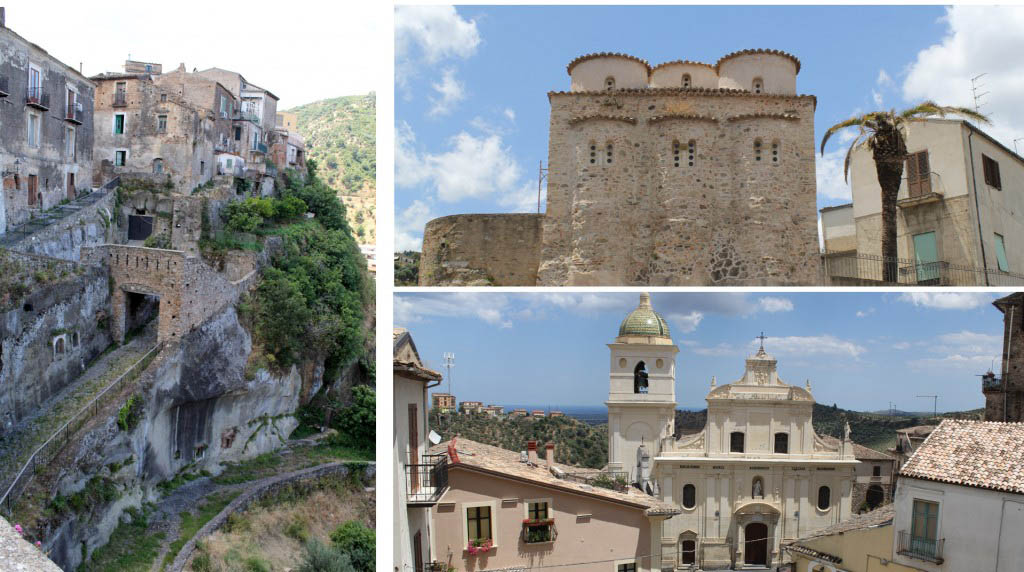 Her husband Ugo was a blacksmith entrepreneur, who had been born and raised in Rossano. He pointed out all the wrought iron railings along the way and explained how they were made. He also recalled what it was like, when the gates to the city were locked every night and numerous other tales of life in Rossano over the last 70 years.  There were patterned tiles his father had made by mixing coloured sand with cement. Churches where the ceremony was still conducted in Greek on special occasions. Grand old palaces as an indication of former wealth. And monuments to the local saints San Bartolomeo il Giovane and San Nilo da Rossano, who were both born in Rossano.

There was so much to see and learn that we kept walking for 2 hours. Up and down the steep, narrow alleys in the labyrinthine oldest part of town, while Ugo and Rosa pointed out interesting landmarks such as the hillside, where all families in town would go to eat watermelons late Sunday night, and the precipice over which mothers threw their infants to keep them safe from air raids during the war. The children were caught by people seeking shelter 10 metres below and brought to safety.

Street scenes from the old part of Rossano on top of the hill.

At that point Rosa was getting seriously worried about the sugo, she had left on the stove at home, and as it was way past noon, she invited us to join them for dinner. We accepted and had a wonderful Calabrian meal with the generous couple. Late in the afternoon as we were saying goodbye, Rosa asked what brought us to Rossano in the first place.

This made them laugh, as the lozenges are produced on the coast and not in the old town. Ugo started to explain how the liquorice roots were harvested once in three years, and how the liquorice maestro personally had to taste and approve the mix of ingredients. Meanwhile Rosa tried to compensate for the liquorice museum being closed by giving us an almost full package of liquorices as a going away present.

We drove away with a clear intention of coming back one day. Both to find the roots of Italian liquorice  production and to hear more of Rosa and Ugo’s fascinating stories.

Two sides of Castrovillari in Calabria