Rapallo in Liguria has more than its fair share of history and pirates, vintage hotels and celebrity stardust. Along with a beautiful seaside promenade, sandy beaches, spectacular hiking paths and an exclusive yacht club.


If you cannot make up your mind about whether to spend the holidays on a luxury yacht moored among the jet set in Portofino; in a deckchair with a view to cocktails and hiking boots in Cinque Terre; or tracking down history in the palaces of Genoa, then Rapallo might be the ideal compromise. 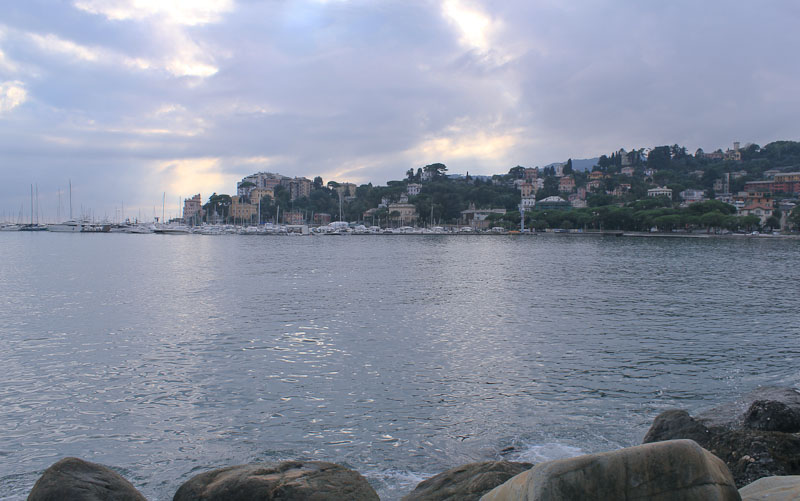 Rapallo is part of the national park covering the Portofino peninsula, and you won’t have to go far to find picturesque hiking trails through the woods or along the coast. In between you’ll come across grandiose private villas, where Berlusconi, Giorgio Armani and their likes have one of their summer residences. The distance from Rapallo to Portofino along the coast is only about 9 km. There’s a nice sidewalk most of the way. And you can stop in Santa Margherita Ligure and Paraggi for food and drink, before you reach the adorable piazetta in Portofino and see the yachts with ondeck helipads and uniformed waiters. The yacht club in Rapallo is modest by comparison, as you will see, if you return by ferry.

For at more spiritual outing from Rapallo head inland towards Santuario Basilica di Nostra Signora di Montallegro. Cable cars lead up to a church, built on the spot where the holy virgin appeared before a simple farmer in 1557. Since then numerous miracles have been attributed to this incarnation of Madonna, who allegedly saved Rapallo from pest and cholera. On a clear day the view from the church 612 m above the sea is miraculous in itself.

The historic centre of Rapallo in Liguria is fairly small and suspended between the only remaining city gate and a pompous bandstand, but the pedestrian area has plenty of charming shops and a nice farmers market. The real attraction, however, is a stroll along the seaside promenade lined with grand cafés, restaurants and pastel coloured hotels, where historic treaties were signed after the end of World War I.

Funny to think that Friedrich Nietzsche was inspired to write Thus Spoke Zarathustra during one of his walks in Rapallo, and that the controversial American writer, Ezra Pound, wrote some of the unfinished epic The Cantos, while he lived in town. I tried hard to discern some philosophy or poetry in the air, but discovered only a light seaside breeze. A mixture of tourists and locals made the most of the mild climate and soaked up a few rays of sun, while sitting on benches with a view of the bay. And a class of school children had the privilege of entering the small castle on the sea erected in 1551.

A History of Piracy

The castle was built in response to a devastating attack on Rapallo by the Ottoman Greek admiral Turgut Reis or Dragut as he is called in Italy. In 1549 Turgut revenged 4 years as a galley slave and imprisonment in Genoa with a surprise attack on the Ligurian coast, where Rapallo was conquered and numerous inhabitants were captured and abducted. The castle should prevent this history from repeating itself by constantly guarding the coast. Centuries later, when the risk of piracy abated the castle was transformed into a prison like a tiny Alcatraz a few metres out at sea. To give the prisoners a chance to repent, a church was incorporated in the castle.

Today the castle serves as an exhibition centre and a backdrop for annual fireworks on the 3rd of July in honour of the apparition of Nostra Signora di Montallegro. The history is chiselled into a brass miniature of the castle positioned beside two canons across the bay from the real deal.

It’s amazing how a little insight can turn an otherwise uneventful promenade by the sea into a captivating historical excursion.

Maps were disabled by the visitor on this site. Click to open the map in a new window.
6 replies

Beef Meatballs with Coriander and Chili