Gondola facts – 8 types of wood and 280 component pieces are used to make one gondola. This is one of the interesting facts about the emblem of Venice and the Veneto.

There are many theories concerning the origin of the word ‘gondola’, but is has never been satisfactorily established. According to the Italian dictionary lo Zingarelli the word ‘gondola’ may derive from the Greek ‘kondoura’ meaning ’small boat’.

The gondola is a flat-bottomed rowing boat especially adapted to conditions in the Venetian lagoon. The earliest recorded use of gondolas in Venice dates back to the 11th century.

Modern gondolas are handmade but highly uniform. They all weigh 700kg, have 280 component pieces and use eight types of wood – ie. oak, elm, lime, larch, fir, cherry, walnut, and mahogany.

All gondolas have an oar or ‘rèmo’  (made from beech) and a walnut ‘forcola’ or rowlock. The oar and the forcola are designed to allow eight distinct manoeuvres such as slow forward rowing, powerful forward rowing, turning, slowing down, rowing backwards, and stopping. In addition each forcola is carved to suit individual gondoliers.

In previous centuries gondolas could be many different colours, but a law from the 16th century requires gondolas to be painted black. The law stopped a competition for the most flamboyant colours and ornamentation among the nobility.  As a result gondola exteriors have just three flourishes – a curly tail, a pair of seahorses and a multi-pronged prow. 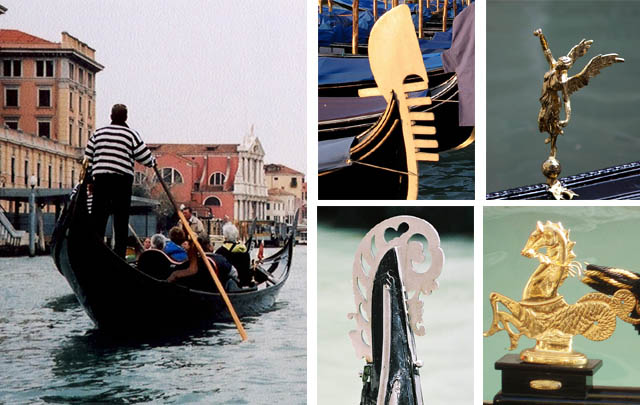 A wealth of detail makes it interesting to study gondolas.

The Purpose of the Prow

The prow is known as the ‘ferro’ (iron), but it can be made from brass, stainless steel, or aluminium. The ferro serves several purposes. It prevents the boat from damage if the gondola collides with other boats or bulwarks, and it serves as a counterweight for the gondolier. It also has ornamental value with the six prongs that may represent the six administrative districts in Venice.

The modern banana-shaped gondola is credited to the 19th century boat-builder Tramontin, whose heirs still run the Tramontin boatyard (Some guided tours include a visit). The constructional development of the gondola continued until the mid-20th century, when the city government prohibited further modifications.

Not an Even Keel

All gondolas are slightly lopsided and bow out on the left. This asymmetry causes the gondola to resist the tendency to turn toward the left at the forward stroke and compensates for the weight of the gondolier, who stands in the stern and rows only on the right side.

In old films and photographs gondolas are often fitted with a small cabin. Its windows could be closed with louvered shutters—the original ‘venetian blinds’. Later the ‘felze’ was replaced by a ‘tendalin’ summer awning, but they too were given up in the mid-1950s.

How to Become a Gondolier

There are just over four hundred gondolas in active service today, virtually all of them used for hire by tourists. In order to become a professional gondolier you need to obtains a license from the guild. Licenses are only granted after periods of training and apprenticeship, and an exam which tests knowledge of Venetian history and landmarks, foreign language skills, and practical skills in manoeuvring the gondola through narrow canals.

A novel guide to Venice

Districts of Venice: The charming backwaters