Many war memorials in Italy are explicitly explicitly gruesome spelling out the suffering and death young men in uniform. The question is why?

I have started collecting war memorials in Italy. Every time I come to a new city, I photograph their ai Figli Caduti setup, like the one above from Castrovillari in Calabria. So far my collection counts about a dozen photos, but it is fairly new, and I have no doubt it will grow.

It started out with a real distaste for the grotesque war memorials occupying the main piazza in all Italian cities regardless of size. Nowhere else in Europe, have I seen so many explicitly gruesome depictions of war, suffering and death. National Mall in Washington is understated in comparison.

To search for an explanation I began to study the monuments in more detail. Some of them are tasteful and classic in the sense of a small plaque, an obelisk or an eagle on a Greek column. Others are bombastic, huge, ugly blocks of granite or concrete. And there are soldiers’ helmets with gun holes through. Piles of lifeless bodies in slightly chipped ceramics. Proud warriors ready to defend the nation. Soldiers or angels, who carry around a dead comrade, while Nike raises a laurel wreath of victory. And gigantic, arches of triumph, which in many cases seem inversely proportional to city’s size. 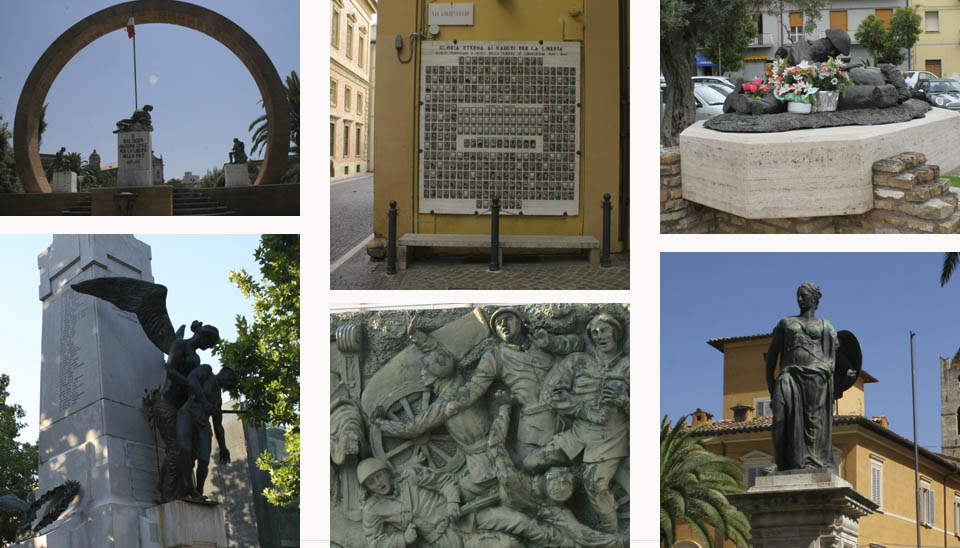 Apart from that I still have not managed to see a connection between monument design and the city’s soul. Is the population of the cities showing brave soldiers willing to fight to defend the common values, happier and more optimistic than neighboring towns commemorating their dead with a hole in the head? Why do some cities prefer horror to heroes?

The deeper meaning eludes me, but at least the war memorials must have created work and a steady source of income for a small army of sculptors. So they do serve a purpose – and their diversity in design and materials is downright amazing.

Other notes similar to this one on war memorials in Italy