Graffiti in Italy has gone from personal to political in order to reflect the current economic crisis.

Graffiti has been known in Italy since the ancient Romans, who decorated the walls of Pompeii and the catacomb with declarations of love, curses and magic spells. In fact the word ‘Graffiti’ derives from the Italian word ‘graffiare’ meaning to scratch something into a surface, and people in Italy still write their passions on the walls.

Though lately – it seems to me – subject matters have changed from ‘Ti amo’ and ‘Forza La Juve’ to political statements. Could be, that  graffiti in Italy has gone from personal to political in order to reflect the current economic crisis. After all, the sense of crisis has become almost palpable in the south over the past months, where out-of-work Italians have taken up begging in competition with Romas and illegal immigrants. 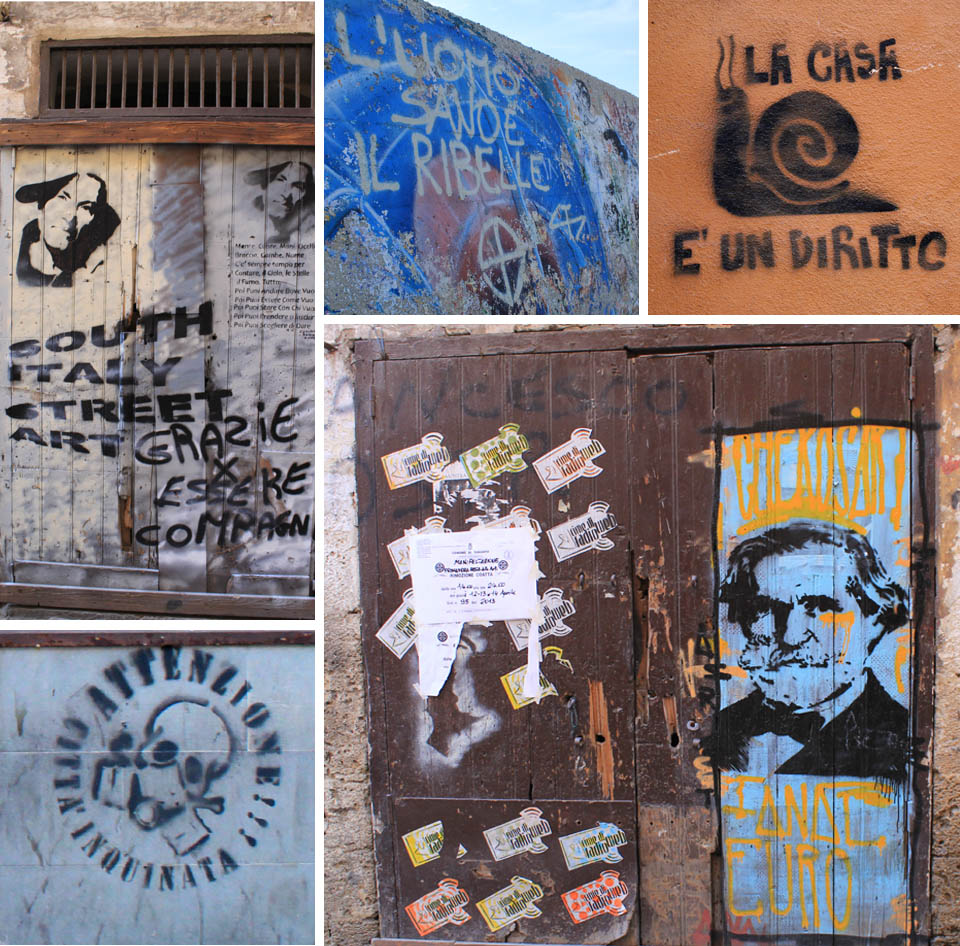 Graffiti seen in Taranto and other parts of Puglia

The present graffiti examples have been collected in cities from Trento in north to Lecce in the south within the last year. And there are plenty of artistic uses of both aerosol cans and stencils to cheer up the otherwise rather depressing concrete walls. 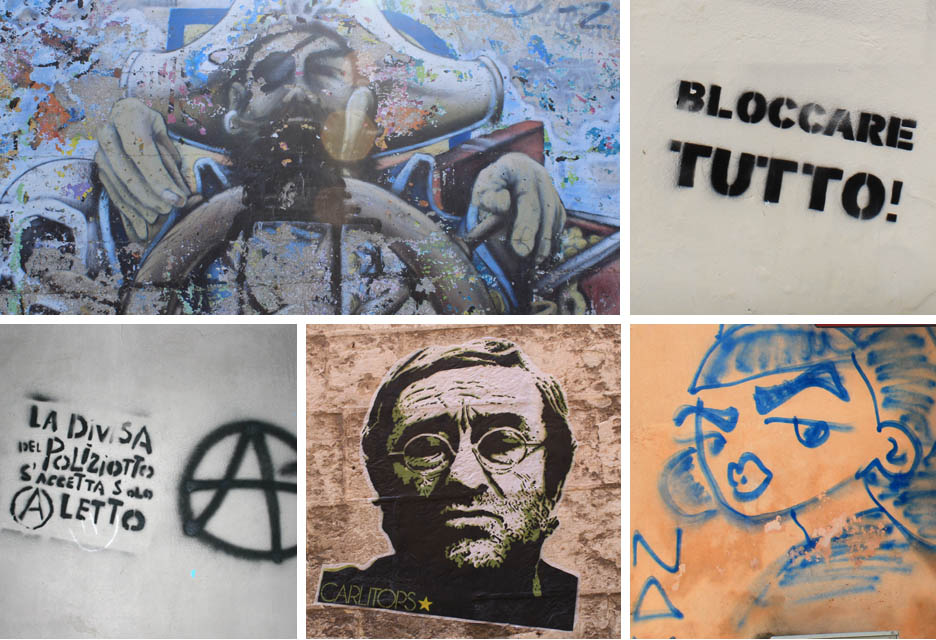 Other examples of Italian vandalism or street art – depending on your point of view:)

Several of the statements refer to the ‘no TAV’ (“Treno ad Alta Velocità”) movement that started as a protest against high-speed trains, in particular the railroads from Lyon in France to Turin. There are also a couple of juicy slogans about rebels and police uniforms. And the rather sad pollution warning, which could be seen all over Taranto a few days before the local  ‘lavoro o salute’ (work or health) referendum where no one wanted to vote.

Goes to prove that you can still tell a lot about a society by reading the messages on the walls. 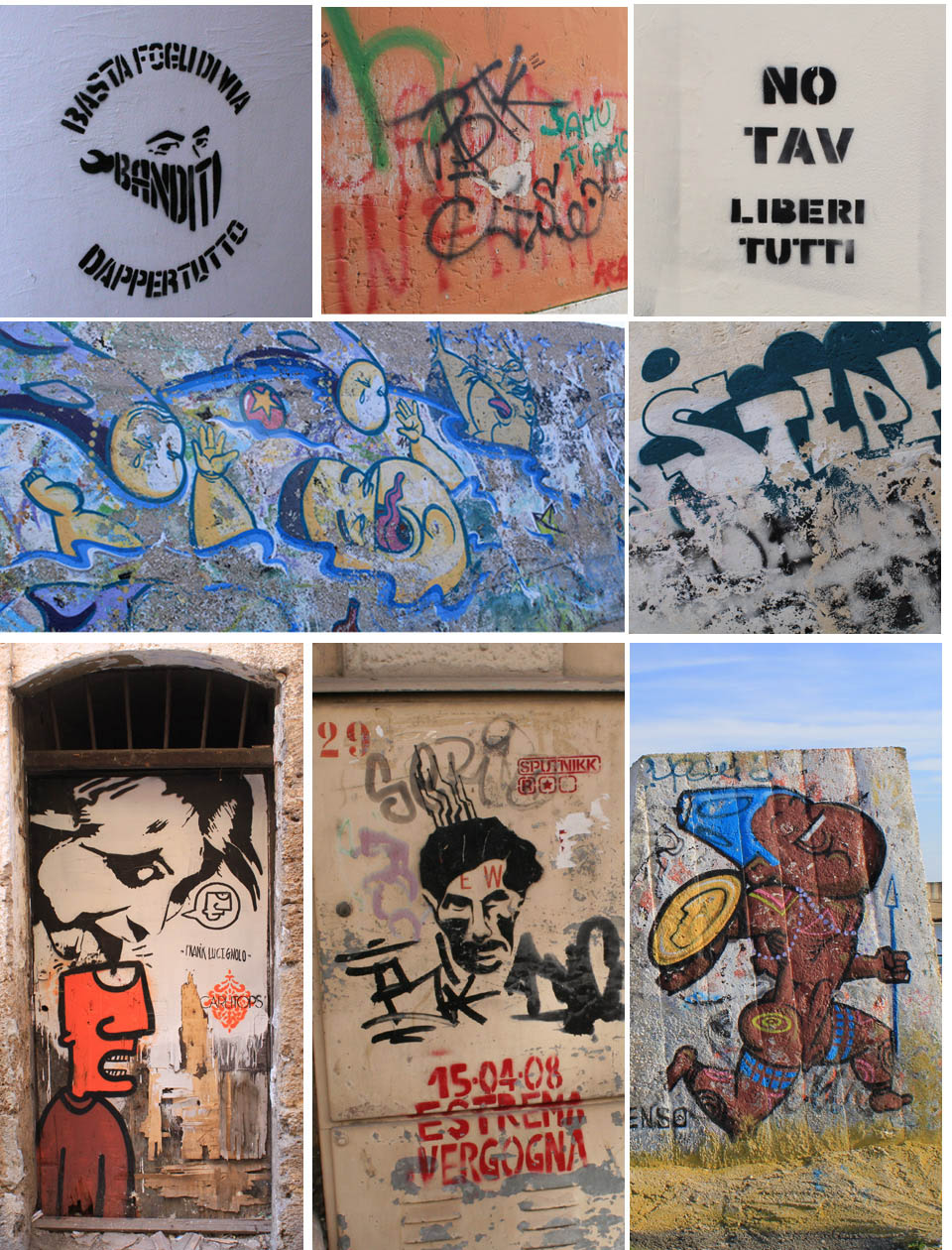 We are far from Banksy, but the stenciling technique is widely used.

Rome wall plaques: Those who came before Kilroy