Exploring the sights of Benevento despite of the wind and the rain of an uninviting autumn day.

A fierce wind blew from the North sending showers of cold and wet rain down over Benevento, which given the circumstances might as well have maintained its original pre-roman name. The Romans considered ‘Maleventum’ a bad omen and changed the name from foul to fair in the more welcoming Benevento, but occasionally winds and events are still evil by nature.

I was looking for the famous witches of Benevento, but the shops were closed and few felt tempted to take a stroll in the rain. Save for the odd umbrella, the broad Corso Garibaldi pedestrian street was deserted and only shadows could be seen flickering the narrow, crooked alleys of Centro Storico. All I managed to find was a couple of signboards advertising a Locanda delle Streghe, a Liquore Strega, and other shops and souvenirs sporting the local Ianara/strega brand. Modern witches seem to have sold their souls to Mammon, who may or may not be identical with the Medieval idea of Satan.

On the other hand, witches are known to blend in with the crowd in order to make their dark magic inconspicuous, so perhaps they were hiding undercover. The only crowd had gathered outside the Chiesa di Santa Sofia, which along with certain aspects of the witch cult bore witness of my long-bearded Lombard ancestors and their presence in Italy from 568-774 AD. Bells summoned locals to high mass in the beautifully simple and vaulted church, and quite a few women were in attendance, though no one – even vaguely – resembled a witch. 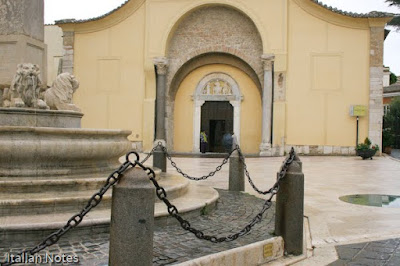 We decided to move on and entered the garden behind La Rocca dei Rettori, thinking it might contain the famous walnut tree, under which Italian witches, wizards and devils met to dance and celebrate under a full moon. In medieval times, the tree was said to infect the brain of any person who might fall asleep in its damp shade. Actually, you just have to look at the nuts for evidence of their affinity to the brain. Furthermore, a pagan rite is said to have existed around a sacred tree in Benevento in the 7th century. Knights were required to gallop towards the tree, grab a piece of snake’s skin hanging from it and pretend to eat it. Apparently, the pagan rite has been mixed up with a snake cult and the legends of the sacred walnut tree, and the up to 200 witches have been on trial for assembling under a tree in Benevento, but few people were actually executed for witchcraft in Catholic Italy.

The park behind Rocca dei Rettori offered a magnificent view, a lot of trees and quite a few distorted and disquieting figures that seemed to be frozen in the past. At least, they could not quite eliminate the image of Benevento as a diabolical place, which means there is still some magic to search for, while we along with millions of Italian children are waiting for La Befana and her small gifts of carbone.

Other attractions near the sights of Benevento

The use of rustication in Italy
Scroll to top