The Eruption of Vesuvius

Pliny the Elder was incurably curious by nature. When he saw the eruption of Vesuvius in August 79 AD, his first impulse was to rush nearer to study the phenomenon.

While we are all grounded and talking about erupting volcanoes, it may worthwhile to recall the fate of Pliny the Elder – the great Roman author, scientist and natural historian, who died under tragic circumstances near Pompeii in year 79 AD.

Pliny the Elder was incurably curious by and of nature as demonstrated by his effort to gather the entire field of ancient knowledge in one encyclopedia, Naturalis Historia, which at the time of his death counted 37 volumes. So when he observed a more than 30 km tall mushroom cloud rising from Vesuvius on 24 August 79 AD, his first impulse was to rush nearer in order to study the phenomenon.

As commander of the Roman fleet, Pliny the Elder was stationed in Misenum on a cape 35 km to the northwest of the Bay of Naples, and he ordered a ship to sail him across the water to Pompeii. Halfway across the bay it was raining rocks, pumice and hot cinders, but instead of turning back the ship continued to Stabbiae (Castellammare di Stabia) south of Pompeii in an attempt to evacuate the people trapped there. Unfortunately, the winds that had brought Pliny and this men to shore, also prevented them from sailing off again, and they had to stay overnight.

The next day the volcano was still active, and Pliny and his companions had to use torches to see through the daytime darkness and tie pillows on their heads to protect them from falling rocks. Near the beach Pliny the Elder, who was a bit on the heavy side, had to sit down and rest, and he died of a stroke or a heart attack without getting up again. 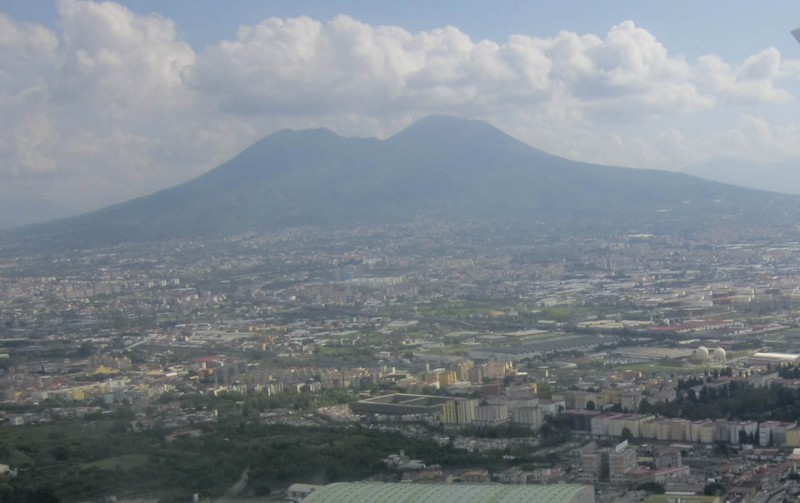 View of Naples with Mount Vesuvius in the background.

Meanwhile his nephew Pliny the Younger stayed in Misenum and he was able to produced the only surviving eyewitness account of the death of his uncle and the erupting volcano. He wrote:

“He (Pliny the Elder) was at Misenum in his capacity as commander of the fleet on the 24th of August [sc. in 79 AD], when between 2 and 3 in the afternoon my mother drew his attention to a cloud of unusual size and appearance. He had had a sunbath, then a cold bath, and was reclining after dinner with his books. He called for his shoes and climbed up to where he could get the best view of the phenomenon. The cloud was rising from a mountain-at such a distance we couldn’t tell which, but afterwards learned that it was Vesuvius. I can best describe its shape by likening it to a pine tree. It rose into the sky on a very long “trunk” from which spread some “branches.” I imagine it had been raised by a sudden blast, which then weakened, leaving the cloud unsupported so that its own weight caused it to spread sideways. Some of the cloud was white, in other parts there were dark patches of dirt and ash. The sight of it made the scientist in my uncle determined to see it from closer at hand.” (text excerpt from Volcano Live)

Today You Can Walk Round the Summit Caldera

Today a similar determination to observe Vesuvius at close hand seizes virtually every tourist visiting Campania. Travellers queue to walk round the summit caldera that encircles main cone, and the volcano seems perfectly calm and docile, but all the same it does have a reputation for sudden, violet explosions.

For this reason, I found myself staring anxiously and with a rapidly spreading pelle d’oca into the mouth of the volcano wondering whether the whirling dust could be a crack in the crust that prevents hot magma, gases and ash from sprouting from the earth’s interior? I was relieved, when we had bought a box of rock and pumice souvenirs and were heading down towards the car park. But still the volcano and the sight from Vesuvius over the bay of Naples on a clear day is an attraction not to be missed.

More sights near eruption of Vesuvius

The romance of the isle of Capri Italy

The painted house in Trento

Hiking in Calabria
Scroll to top