The romance of the isle of Capri

The isle of Capri is one of the once-in-a-lifetime places in Italy. A calm, care- and almost carfree island 80 minutes boatride off the hectic traffic in Naples.

The ferry trip it itself is stunningly beautiful heading out for the rocky outcrops in a sparkling sea with Naples’ skyline and the Vesuvius volcano over your right shoulder and the Sorrento peninsula on the left.  Getting closer you’ll see the Faraglioni limestone crags and the steep green slopes before the boat docks in Marina Grande. From there you can take another boat out to the Blue Grotto or take the funicular up to Capri Town.

Designer shops and everything limoncello

We decided to walk up the hill, which might not be the wisest decision with children in the midday sun, but the views were unforgettable and around every other u-turn shade could be found.

Capri town was packed with classy restaurants and cafes, posh hotels, designer boutiques and souvenir shops selling everything limoncello, where wealthy tourists were airing their big hats and gold watches. A great place for honeymooning couples wanting to immerse themselves in beauty and luxury. Or for anthropological field studies in hedonistic lifestyles. 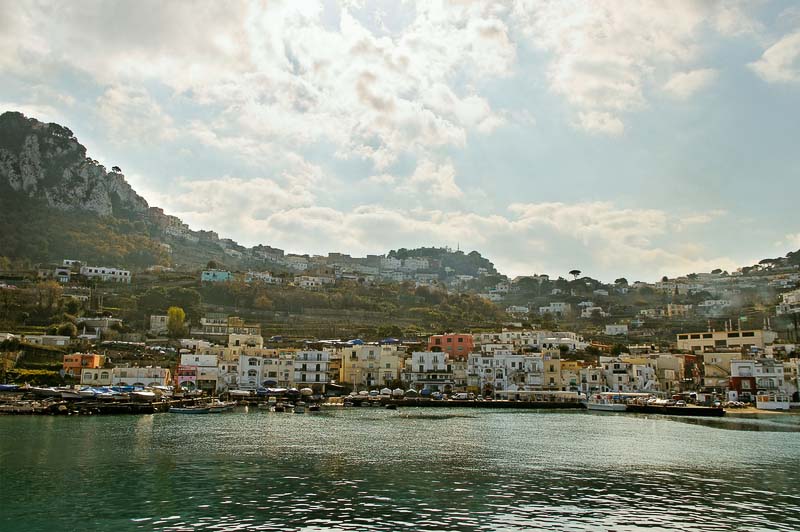 Capri is like many of the towns on the Amalfi coast with the added charm of being an island.

In the late 19th and early 20th centuries Capri became a popular resort for artists, writers, actors and other celebrities. Graham Greene had a house on the island and in ‘The Lotus Eater’  Somerset Maugham gave a poignant description of an English banker who traded his tedious life in London for 20 years in beauty and luxury on Capri. He ended up living among the animals in a barn, having learned the lesson of not making unpremeditated, hasty decisions you cannot really afford.

Someone who managed to finance the Capri passion was the Swedish physician Axel Munthe. He built the celebrated Villa San Michele on the island and willed it to the Swedish nation. The complex still functions as a museum and cultural center hosting concerts and visiting Swedish scholars.

If I ever go back to the isle of Capri Italy, I will definitely take the bus up to the inland town of Anacapri and walk up to the villa. But then I won’t go back to the Blue Grotto. Daytrippers – like dreamers and bankers – can’t have it all.

Maps were disabled by the visitor on this site. Click to open the map in a new window.
10 replies

Pomegranate salad with feta and fennel