On Prato della Valle in Padua

How a drained swamp became one of Europe’s most beautiful piazzas.

250 years ago Prato della Valle in Padua, one of the grandest and most beautiful piazzas in Europe, was an uninviting swamp.


One of the highlights of a visit to Padua is a stop on Prato della Valle. To walk around among 78 life-sized marble statues of spiritual and intellectual leaders from the 18th century. Cross a low stone bridge to watch mesmerizing reflections in the canal. Sit down and lean on Galileo Galilei or Francesco Petrarca, while children, dogs, and groups of friends and students fill the lawn with balls, bicycles, books and chatter or circle the lush green island to study the elegant palazzos and monumental churches lining the square. Prato della Valle is an urban space emitting beauty, culture and zen in equal measures.

This wasn’t always the case. Over the centuries Prato della Valle has been a swamp, a circus, a place of execution, a castle of love and battleground, before the enlightenment drained the swamp and transformed it into a place of cleanliness, order and beauty. 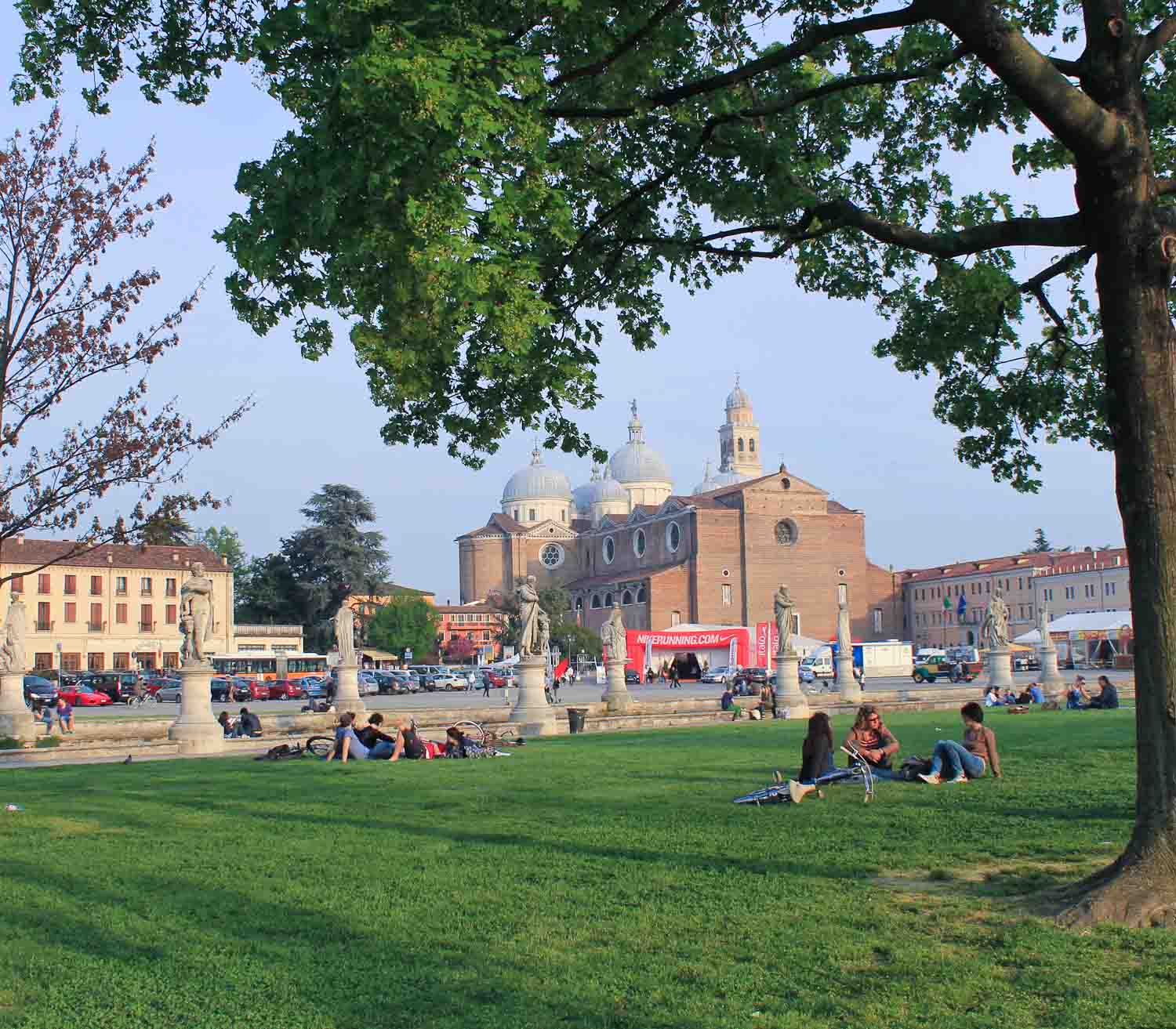 Students relax on the artificial island that was once a place of worship and prosecution.

It Started With a Temple and Some Martyrs

Prato della Valle in Padua has been a public space as long as anyone remembers.

In Roman times, there was a temple dedicated to the Roman goddess Concordia, who embodies agreement in marriage and society. There was also an arena for the worship of Janus, the two-headed god of all beginnings, transitions and endings and a scaffold used for the prosecution of the first Christian martyrs and captivated enemies.

Two of the four patron saints of Padua lost their lives here. Santa Justina and Saint Daniel of Padua. Santa Justina was a girl of noble family who was executed in 304 for her faith. Apart from that very little is known about her, but she is often depicted with a palm leaf in her right hand and a unicorn by the side as an emblem of her purity and grace.

Saint Daniel was a deacon of Jewish descent, who served the first bishop of Padua St. Prosdocimus in his missionary efforts. As a reward he was decapitated in 168, and it took the faithful 800 years to recover his body and save the relics in the cathedral. St. Daniel can be recognised on the bunch of reeds and towel he is carrying as signs of his service to the bishop that point back to Jesus’ washing of his disciples’ feet. For some obscure reason he is invoked by wives whose husbands are at war.

The Castle of Love

In Medieval times the site was mainly used as a race course or battleground for public entertainment, but Prato was also a marketplace for marriage.

Once a year a wooden castle called the castle of love was erected in the square, and draped in draped in fur, shawls and precious fabrics. On a particular day, unmarried girls from noble families were dressed up in armour and elegant helmets decorated with gold and precious stones to defend the castle. They were attacked by young men who hauled fruit, flowers, perfume and objects of silver and gold at their female opponents, who were eventually defeated and left the castle one by one holding hands with their personal conqueror. The charade was followed by lavish banquets and subsequent weddings, while Prato returned to mud. 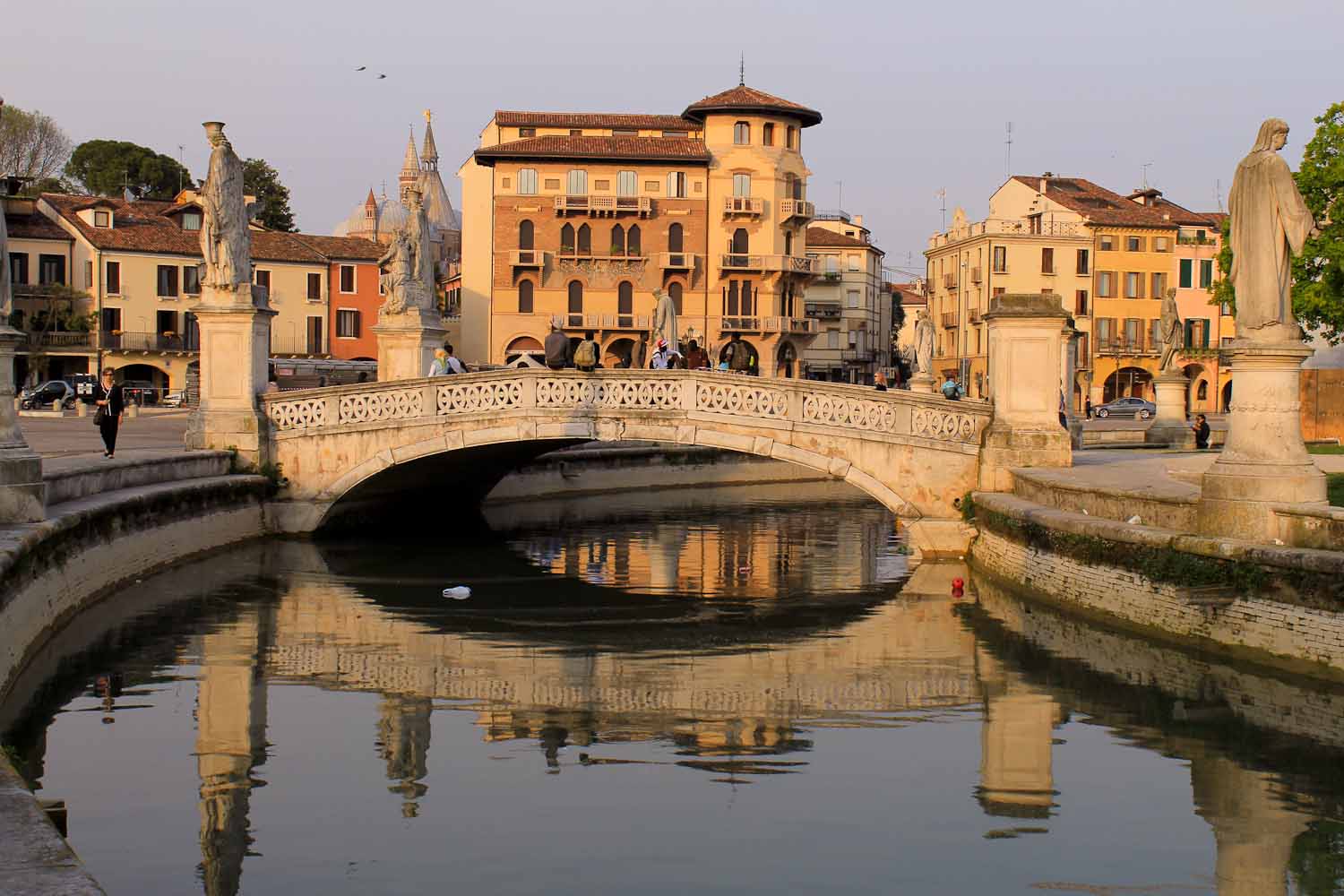 By draining a swamp, Padua gained a circular canal surrounding a landfilled island.

A Vision of Trade and Hygiene

It was this boggy meadow Andrea Memmo saw in 1775, when he looked out of the windows in Palazzo Angeli. As a Venetian nobleman, Andrea Memmo had been stationed as superintendent of the Venetian Republic in Padova, and his primary objectives were to ensure a commercial revival and improve public hygiene.

His vision for Prato was to create a urban space that could accommodate occasional trade fairs and serve as a civilized recreational area for the public. Inspired by the garden of Venetian patricians, he wanted to create a commercial island surrounded by two rings of statues on both sides of a canal.

It took only 6 weeks to drain the area by digging an elliptical canal and filling the soft and marshy centre with 10.000 wagon loads of earth. The land reclaimed has since been known as Isola Memmia. On this island there was room for 54 market stalls and the rent generated helped to finance the project. 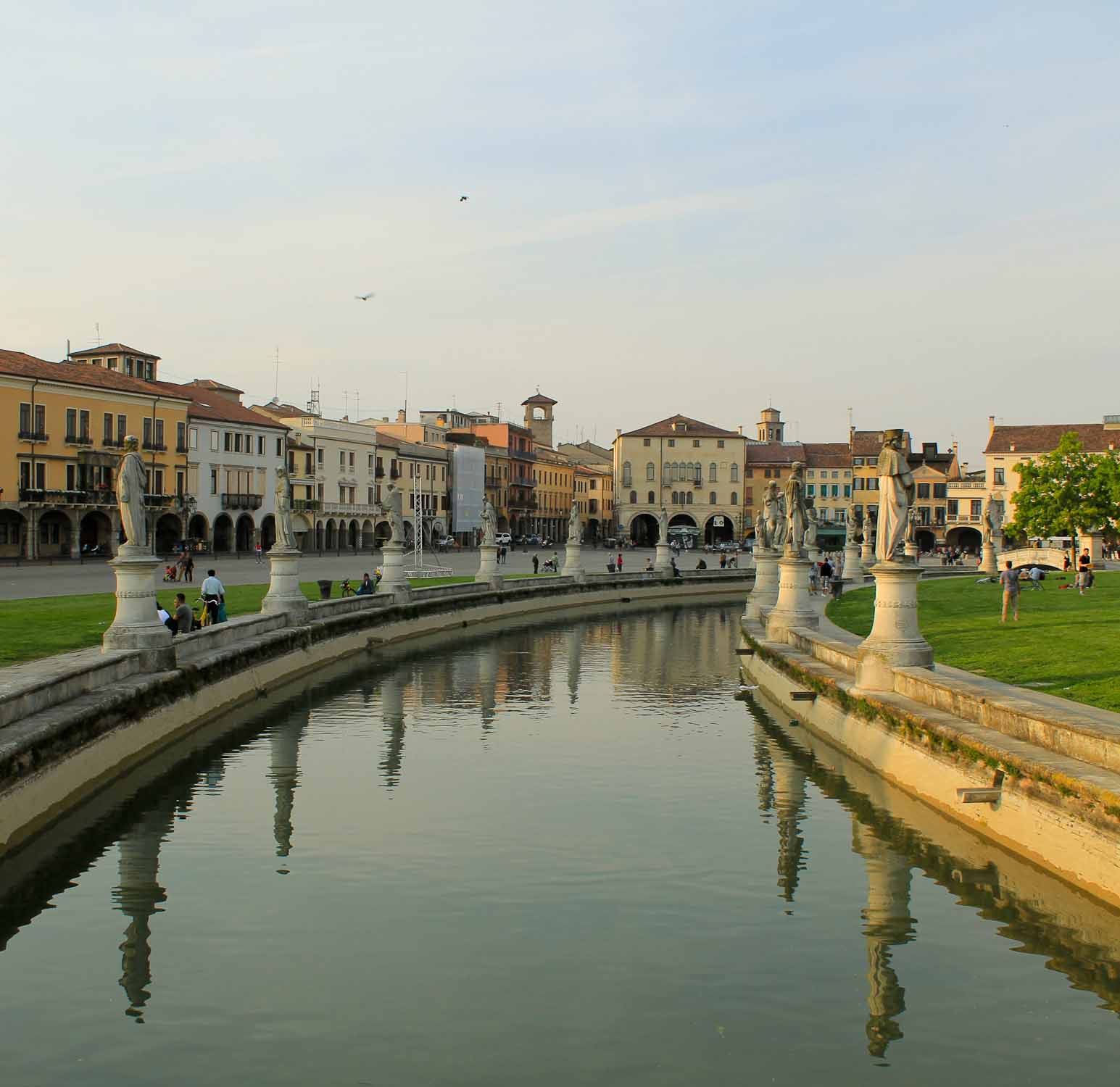 Still, the original design was not completed until years after the death of Andrea Memmo. The 78 marble statues by various artists that turned Prato della Valle into a sculpture garden were added successively over the next 100 years.

The statues represent the most illustrious sons of the city by birth or adoption. Most of them are professors and students who have worked and studied at Padua University. Statue number 44 represents Andrea Memmo and was erected shortly after his death in 1793, while other statues portray Antenore, Torquato Tasso, Pietro D’Abano, Andrea Mantegna, Francesco Petrarca, and Galileo Galilei. Only the statues by the four bridges were reserved for Popes, Doges and politicians.

In my opinion it is the statues of Renaissance characters that give Prato della Valle its special atmosphere of an urban space made for the immaterial purpose of beauty and public good.