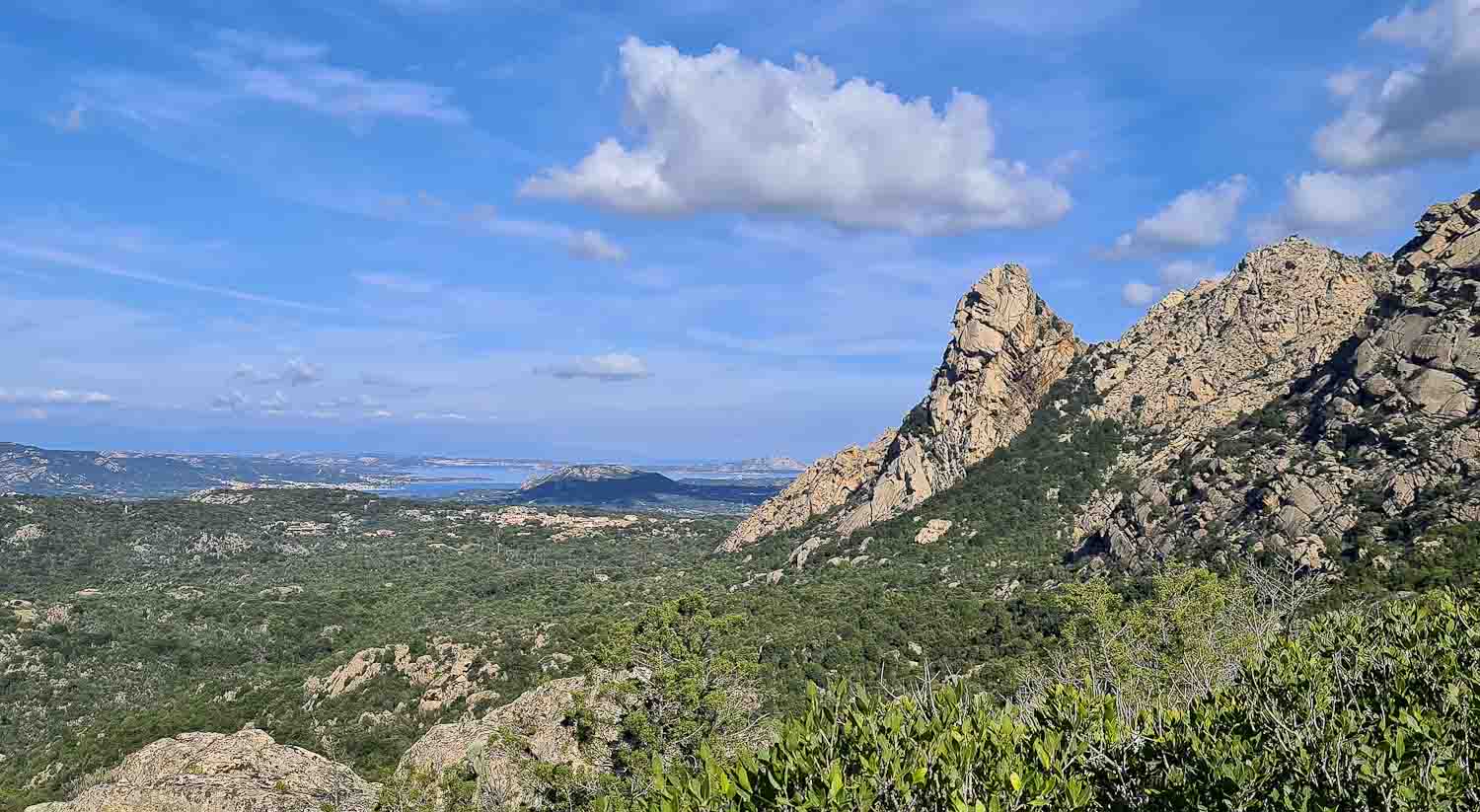 Descriptions of the hike from San Pantaleo up Monte Cugnana seemed like an easy starting point for a hiking holiday in Sardegna. It was not without challenges, however, but the splendid views made it worth every minute


San Pantaleo is an idyllic village near Olbia in the Sardinian province of Sassari. The surrounding landscape is characterized by monolithic granite boulders, pointed rock domes and imposing pinnacles here and there interrupted by patches of wood and views of the turquoise sea and the Gulf of Arzachena.

Before leaving for a November trip to Sardegna we had acquired the Rother Walking Guide from 2011. I did not think that the intervening decade could have changed the landscape much, but the first hike made me wiser. We were heading for the rock towers of Punta Cugnana. A moderate walk of 7,5 km with a height difference of 360 m to be accomplished in three hours and 15 minutes.

The first challenge was finding a place to park the car. The guide indicated a steep turn uphill on Via Manzoni, but there were no street signs and the GPS did not recognize the name. In the end we left the car by some holiday homes under construction and started the walk up a broad gravel road. Soon a wire across the road announced that we were entering an ‘strada privata’, but it seemed to be intended for motorized vehicles, so we moved on unperturbed. 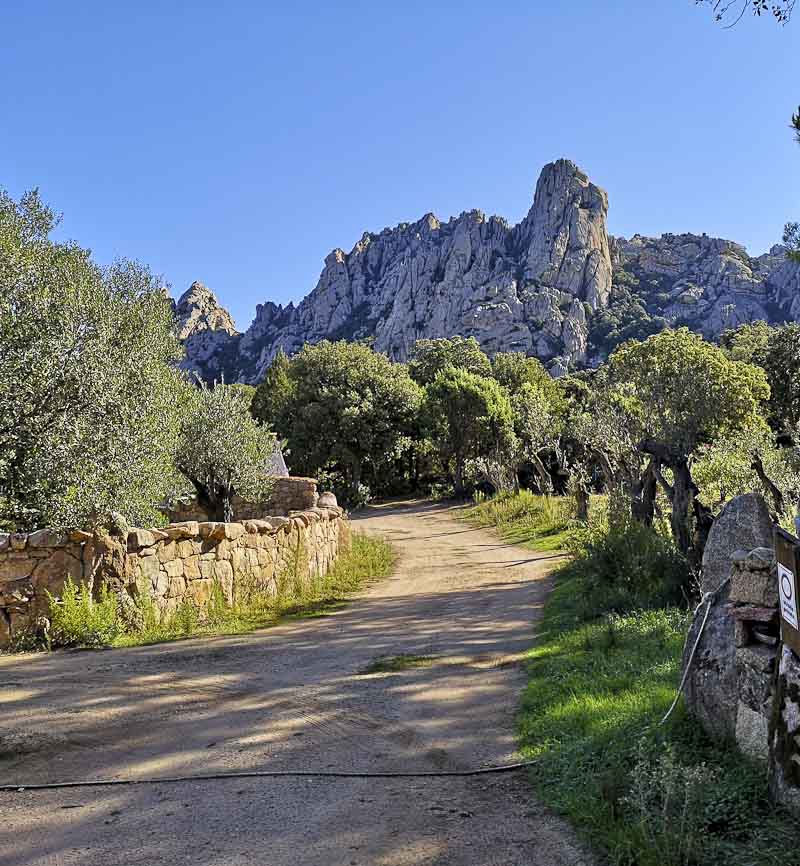 It was a lovely sunny autumn day with clear blue skies above the vertical monolithic boulders worn smooth by erosion that framed our field of vision and the hike was easy without greater impediments than small stone walls and natural ditches. 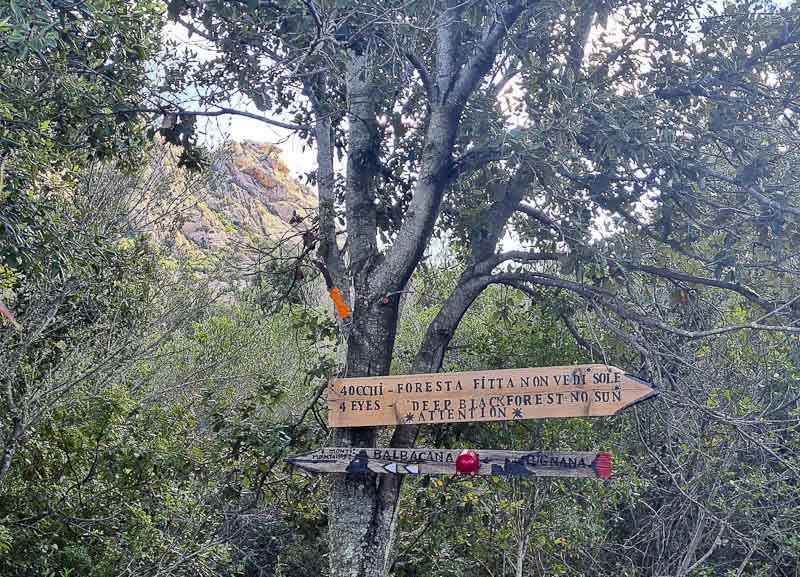 After we had met a man giving us directions we came across a sign pointing to the dense – see-no-sun forest.

Not much further on, however, we reached a t-section and tried to decide between left and right. A transistor radio in the distance was blaring out Italian popmusic and the news of the hour, but apart from that all was silent and the Rothers did not offer much help.

After a while a man emerged out of the bushes and asked where we were heading. He told us that a left turn would lead us into a deep dark wood, where the sun never shines and where there was no mobile coverage. Several tourist had to be rescued out of that wood every year, so he would strongly recommend that we chose the path to the right and headed up the mountain. And if we reached the cross at the top, we would have a magnificent view of Costa Smeralda and under the right weather conditions we might even be able to catch a glimpse of Corsica. 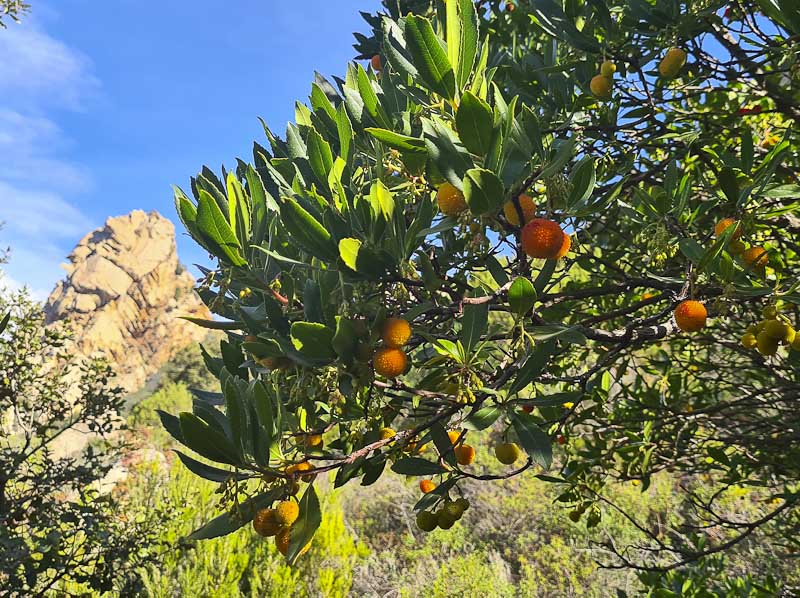 My first encounter with a fruit bearing strawberry tree.

Uplifted by this information we continued along a small but discernible path totally surrounded by macchia mediterranea. The rosemary, thyme, broom and laburnum bushes were still fragrant and occasional strawberry trees offered snacks of sweet red berries. Occasionally the path forked out in several branches, but although there were few or no signs we remained confident and after passing through a stone corridor we reached a plateau with a breathtaking view of the landscape and Golfo di Cugnana. 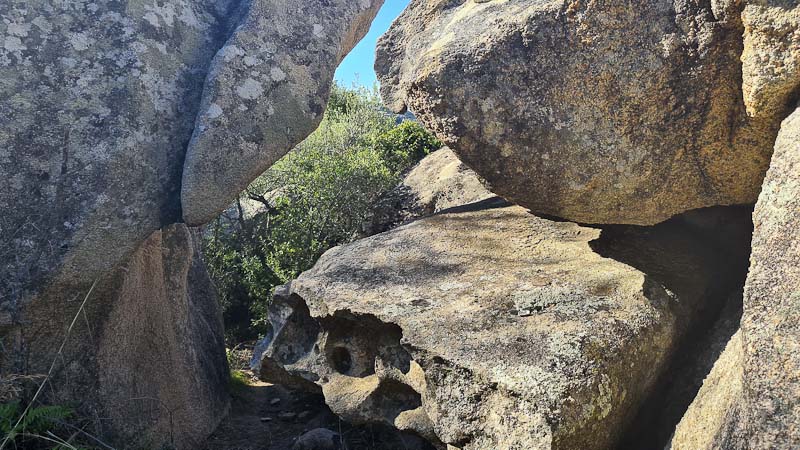 The trail up Monte Cugnana from San Pantaleo is strewn with huge boulders forming a stone corridor.

From then on the trail became ever harder to follow and after about two hours’ hike the only way up was through a steep stream bed with rolling cobbles, making me afraid of spraining an ankle – or breaking a leg. It was impossible to see if the trail reemerged, and we were still quite far from the cross at the top of the mountain and the promised glimpse of Corsica, so considering the risk we decided to turn around and head back down to San Pantaleo.

On the way down, we met a couple of Germans making the ascent with a local guide, and that seems like a sensible solution for untrained tourists wanting to climb Monte Cugnana. 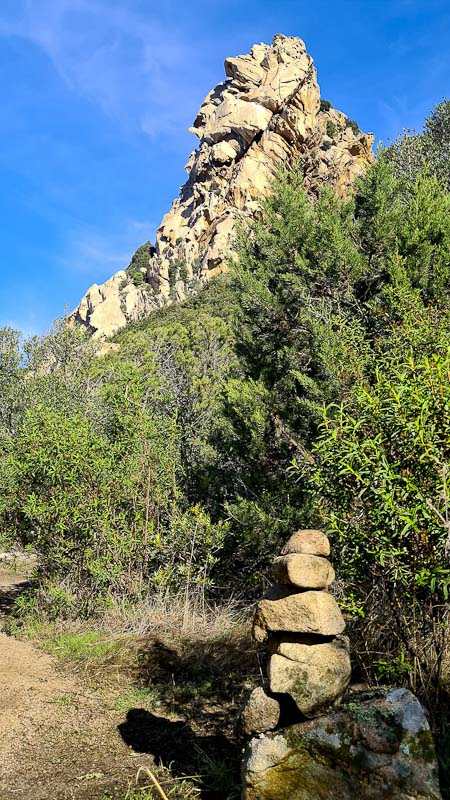 Rock cairns are used to indicate that you are on a trail.

Still the hike is absolutely recommendable for the majestic boulders, mesmerising views and magnanimous macchia mediterranea.